Designing a wood bridge is one thing. Actually building it knowing a series of 19-pound weights will be placed on it is another. Teams of first-year students from the College of Engineering & Computer Science in ECS 101 had about a week and a half to build their bridges before they presented their computations and learned how much their bridge could actually hold.

“There is a panel of experts in the field and you get to try to show what you have learned in the classroom and actually show it in real life,” says Milton Crawford ’21. 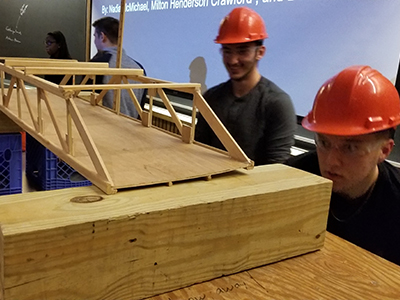 Student engineers get ready to test their bridge.

With their classmates, professors and judges watching, the weights went on one at a time.

“I was scanning every inch of my bridge to make sure it will hold intact,” says Crawford.

Bridges creaked, twisted and bent before some of them finally broke.

Truss bridge designs were the most popular, but not the only approach. Freshmen Stephanie Schein, Bradley Frederick and Emma Brown built an elaborate cable stay bridge.

“The loads are transferred from the bridge deck through the cables to the towers and down to the ground, which must be stable enough to resist the loads,” says Schein. “We wanted to try something different from the trusses so we thought, why not do something fun?”

Freshmen Anna Arcaro, Ravyn Smith and Nathan Fathers designed the first suspension-style bridge ever entered into the ECS 101 bridge competition. They went into final testing hopeful their bridge would survive.

“Every material has a point where it is not going to go back to its original state so that breaking point affects everything. If we destroy the smallest joint in this bridge it could affect the entire testing process,” says Fathers.

The integrity of their bridge was reliant on the accuracy of their math and their building skills.

“For us, it is real-life stuff. That’s why we choose to be engineers because we found fascination in geometry,” says Arcaro.

Then they had to wait as other teams tested the limits of their bridge designs.

“It weighs on you—like, oh my god, my bridge might break,” says Smith. “I really don’t want our bridge to break. I just want to be able to look at this bridge in the middle of the hallway for four years and know, our bridge didn’t break, thank god.”

Their suspension bridge did not just hold together—it carried every weight available for testing. A total of 300 pounds.

“We did way better than I thought. All the plates was kind of a dream,” says Fathers.

Even in the midst of their celebration, great engineers are always looking forward.

“Maybe we could do this again but make it better,” says Smith.