Virtual reality has grown beyond the gaming world and is increasingly being used for a variety of applications—including education. Researchers in Assistant Professor Melissa Green’s Flow Visualization Lab in the College of Engineering and Computer Science are developing a way to apply it to their work. 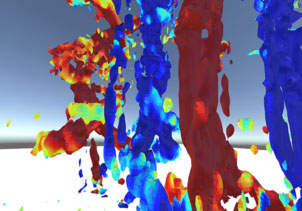 Anything that moves through water or air leaves behind an invisible wake of swirls and waves. Flow visualization makes these “flow field” patterns visible to allow researchers to study them.

This can be done physically using dyes or smoke, and it can be done with computer software.

Green uses experimental flow field models to better understand how to optimize propulsion of nautical vehicles and looks to how fish swim for inspiration. Traditionally, 3D flow fields are visualized on a 2D screen. This restricts the movement and rotation of the 3D flow field models. By viewing the same models in a 3D virtual space, things like depth and size distortion are alleviated and researchers can interact with the visualized data more naturally.

“When a flow field is on a screen, the interaction can be limiting. When you plot it in virtual reality, then you can just walk inside it and look around,” says Green.

The VR interface also allows the user to toggle among time, orientation and position with ease. Using handheld controllers, they can enlarge or reduce the size of a flow field, control the orientation of the model and toggle through different parameters.

The project, funded by a grant from the Syracuse Center of Excellence, began in the spring of 2016 after Green’s partner Ben Adamson, a senior interactive designer in SU’s Online Platforms team, suggested she find a way to use VR to visualize her group’s research data in 3D space. She looked to Assistant Professors Amber Bartosh and Bess Krietemeyer of the School of Architecture and Interactive Visualization and Design Lab  for their guidance. Bartosh and Krietemeyer employ VR in designing energy data visualizations for architectural design.

Aerospace engineering alum Ranbir Dhillon ’17 laid the groundwork for the work being done today by Green and Noah Pietraszewski ’18. The team uses Matlab to export structural models of their data to build flow fields in Unity VR. The process is the same as designing video games levels in the software.

While still in the early stages, the application of virtual reality in flow visualization shows real promise for fluid dynamics research and teaching. In addition to augmenting her research, Green has plans to eventually use their work as a teaching tool.

“Once we’ve figured out the best method to do this, then we’ll be able to produce VR learning modules. We could ask questions about the relationship between pressure and force, for example, and then let students explore it in VR,” she explains. “It’s a fascinating new way to immerse ourselves in the data and explore the physics of fluid flows.”