Aaron Wolfe expects to finish up his Ph.D. in physics this semester. He has been working on his doctorate since 2011 and should have been done by now, he says, but a few things have gotten in the way—like helping to run a company, Ichor Therapeutics, of which he is chief operating officer. 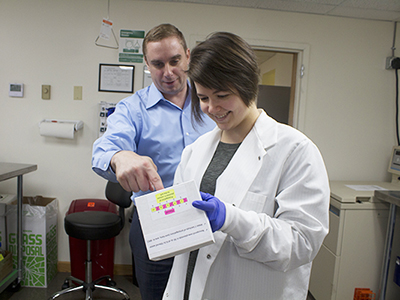 Aaron Wolfe shows Ellie Iumen what plasmids to use for a protein production run at Ichor Therapeutics.

“I have always wanted to run a biotech company,” Wolfe says. And in fact, he co-founded a company once before. This was after he got his bachelor’s degree at SUNY College of Environmental Science and Forestry in biotechnology and completed coursework in finance and entrepreneurism at the University of Pennsylvania’s Wharton School. His company brought a product to market, but like most startups, it failed, and he moved on.

In the College of Arts and Sciences, Wolfe has studied under Liviu Movileanu, program director of what is known as the SB3 graduate program, which includes structural biology, biochemistry and biophysics. Wolfe calls it a place for people who don’t “fit in a box.”

There, he worked closely with Adam Blanden, who was enrolled in a dual M.D./Ph.D. program with Upstate Medical University. In 2015, the two established Finger Lakes Bio, a startup drug and biologic development company.

Wolfe is still the CEO of Finger Lakes Bio, but his entrepreneurial fingerprint has grown since 2015 to include co-founding RecombiPure, a company that builds research tools, and Antoxerene, which does small-molecule drug discovery. Along with this he is acting as COO of Lysoclear, which does research on macular degeneration, and Ichor Therapeutics, which is a profitable contract research organization. He is doing all this with the help of his partners Blanden and Kelsey Moody (another former Upstate medical student).

Moody established Ichor in 2013 in his living room during medical school and has been growing the company ever since; Ichor is now in its third location. After visiting the facility, it is clear that Ichor is thriving. Its capital is increasing each year and Wolfe proudly points to the state-of-the-art equipment around the company’s LaFayette, New York, labs. The component companies have been able to attract contracts and investment just through word of mouth.

The atmosphere around the lab is casual but bustling. On a tour, Wolfe points out interns from several local colleges, and one of the scientists boasts about having purified several new proteins over the past week, when a typical lab might achieve one such purification in a month.

Ichor is always seeking to move into new areas, Wolfe says, and its website confirms this: “Fundamental to the Ichor culture is an emphasis on professional development. Our backgrounds span diverse disciplines in the life sciences, engineering, computer science and business. Team members are encouraged to embrace this diversity as a professional development opportunity, and to obtain cross training in areas unrelated to their core competencies,” it states. 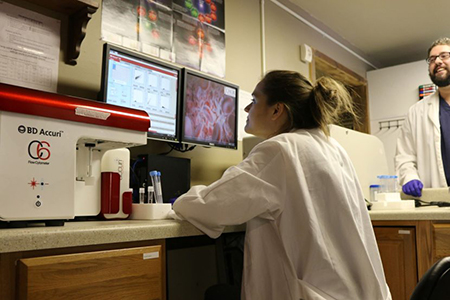 Employees at work at Ichor Therapeutics

Along with Ichor’s 19 employees, interns at Ichor come from several educational institutions around the area, including Syracuse and SUNY ESF. Wolfe is proud that the company is able to help students just starting out pursue their research dreams.

Wolfe says earning a doctorate has been advantageous in achieving his goal of running a successful biotech company. “Having a Ph.D. gives me a baseline credibility,” he comments. “When we move up to the next level of funding it will be especially helpful.”

He credits his advisor, Movileanu, with being “very gracious and patient” during the long period it took him to complete the work toward his degree. “I was able to work with him fairly autonomously for five years, which was extremely beneficial.”

Wolfe always knew he didn’t want to use his Ph.D. to climb the academic ladder. He’s actually right where he wants to be. He just wants to keep building his company.