A large National Science Foundation (NSF) grant allows Mitchell Soderberg, associate professor of physics in the College of Arts and Sciences, to lead a team researching particle physics in the ongoing quest to explain how the universe works. 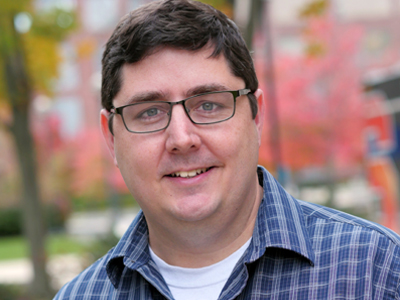 Soderberg’s research involves measuring how neutrinos–subatomic particles with no electric charge–change from one type to another. The experiments he is involved with are central to moving the understanding of physics beyond the Standard Model–the 1970s theory of fundamental particles and how they interact.

The 2017 NSF grant is the fourth NSF grant Soderberg has received at Syracuse; all fund his group’s involvement in the Fermilab neutrino program.

DUNE experiment, which will feature a giant TPC, located 1-mile underground in an old gold-mine in South Dakota, receiving a neutrino beam that originates from Fermilab.

Soderberg has worked since 2006 on developing LArTPCs to study neutrinos, including a role with the Deep Underground Neutrino Experiment (DUNE) at the Long-Baseline Neutrino Facility (LBNF). He and Assistant Professor Denver Whittington are already working on the design details of LBNF/DUNE, which had a groundbreaking ceremony on July 21 at the Sanford Underground Research Facility (SURF) in Lead, South Dakota. When completed around 2027, LBNF/DUNE will be the nation’s largest experiment devoted to the study of neutrino properties.

This grant will primarily fund salaries of Soderberg’s group, which includes four graduate students (two based at Fermilab and two at Syracuse) and one postdoctoral researcher (based at Fermilab), and two undergraduates working on projects at Syracuse. The grant will also allow Soderberg to hire a postdoctoral researcher to work on a project based at CERN, the European Organization for Nuclear Research. 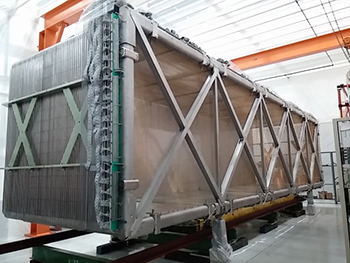 Syracuse group members manufactured 3000+ sense wires, that are barely visible in the foreground of this object, here at SU. The machine shop at SU also manufactured a lot of the metal pieces that make up the MicroBooNE Time Projection Chamber structure in this image.

Soderberg’s neutrino experiments, like the groundbreaking gravitational waves research Syracuse physicists are working on, use large computing resources, develop custom detection techniques and work in huge international collaborations with scientists from all over the globe. Syracuse University physicists were among the global team that recently observed the collision of two neutron stars that confirm the origins of heavy metals like gold and platinum.

“Existing neutrino experiments did not see anything associated with this discovery, which was a bit disappointing,” Soderberg says. “It is possible that certain kinds of astrophysical events, like the neutron star merger that LIGO [the Laser Interferometer Gravitational-Wave Observatory] just discovered, would also produce a burst of neutrinos that could be detected by large neutrino experiments such as DUNE.”

The new grant supports the group’s research, which will make interesting physics measurements and test new hardware techniques for future experiments. The research could, for example, inform cosmology by providing “some insight into how the universe came to be dominated by matter,” he explains.

“The development of detector technology to study neutrinos is interesting in its own right, and perhaps will have applications in other realms of physics or industry down the road,” Soderberg says.