People who suffer from chronic infections, such as Lyme disease, are forced to resign themselves to the fact that they will live with the disease for the rest of their lives. Researchers in the College of Engineering and Computer Science are taking steps to better understand these kinds of infections and contribute to the science that may one day lead to a cure. 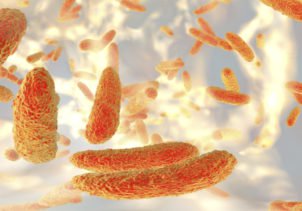 Disease cells as they might appear under a microscope

Chronic infections can be treated, but never completely defeated because they form something called persister cells in the human body. These types of cells are difficult to combat because of their ability to enter dormancy. They essentially go to sleep, and while they are in that state, antibiotics are useless against them. When persister cells reactivate, or wake up, the infection rages in the body once again. When active, they become vulnerable to antibiotics. However, no matter how many active cells are killed, if dormant cells remain, so does the disease.

The scientific community is making progress to uncover the physiology of these bacteria and to develop new strategies to fight them. Unfortunately, studying persistence in bacterial biofilms is a big challenge because of the random factors that cause persister formation and variations in the level of persistence between experiments.

A collaborative team led by Professor Dacheng Ren and Assistant Professor Shikha Nangia is developing an experimental system that can control the formation of persister cells and “wake up” dormant cells in biofilms using synthetic biology. Their experimental system will manipulate persistence by tuning the level of toxin and antitoxin genes within the cells, and they will monitor the results for persister formation and “wake up” in real-time. They will also use computational simulation to quantitatively understand the persistence and antibiotic penetration into complex structures and cells. Recently, the team was awarded $330,000 by the National Science Foundation to continue their collaborative work on this topic.

Ren says, “We understand what’s happening, but we’re missing the technology to target these cells. This is fundamental work that will ultimately help us develop drugs to control and hopefully defeat the cells that cause chronic infections.”

For additional details on this work, check out the award abstract on the NSF’s website.