Not every entrepreneur’s prescription for success is exactly the same, but there are often many ingredients in common: a novel idea, a vision of success, hard yards, a dash of luck and a carefully cultivated network of advisors, mentors, investors and other champions. David Zuleta—while still a neuroscience and biotechnology undergraduate in the College of Arts and Sciences—is skillfully combining these ingredients to develop ModoScript, a digital prescription dosing system that he hopes will combat prescription drug abuse, boost patient compliance, cut medical costs and disrupt the medical device industry. 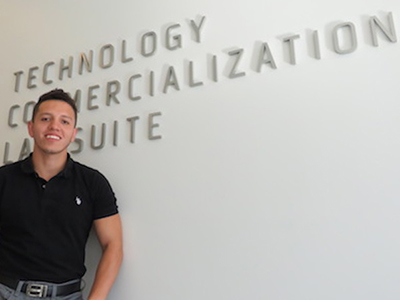 With the help of the College of Law’s New York State Science and Technology Law Center (NYSSTLC), Zuleta’s vision is coming into focus and his network growing as he moves ModoScript from the concept stage toward prototyping and eventually the marketplace.

“I started ModoScript while I was working as a part-time medical scribe at Crouse Hospital,” explains Zuleta. While he interacted with physicians, pharmacies, health insurance companies and academic experts, Zuleta began thinking about ways to combat the epidemic of prescription drug abuse by improving the current prescription system. “We need a system to regulate opioid prescriptions in order to lower dependency,” Zuleta observes. “Currently, when you are sent home from a care facility, often you are forced to go off a pain medication ‘cold turkey,’ and that’s when people find themselves experiencing withdrawal symptoms that often lead them to use street drugs like heroin.”

In order to effectively control pain and keep patients from abusing prescription medications, Zuleta conceived a tamper-proof, “smart” dosing system to better regulate the flow of opioids, stimulants and anxiolytics. He hopes to combat the ongoing epidemic of drug abuse from the root, while reducing costs associated with patient non-adherence, overdose, under-dose and prescription trafficking that the healthcare industry must deal with.

ModoScript’s digital health system combines an automated, “pill-safe” dispenser with a mobile application to connect several sectors of the healthcare industry. A patient prescribed controlled medications will be required to use the pill-safe dispenser provided by a pharmacy. The dispensers are fitted with biometric safety locks to combat abuse and ensure proper patient compliance.

Zuleta says there are other safety pill dispensers on the market, but ModoScript differentiates itself by being a business-to-business platform that will be sold not directly to patients but to insurance companies tackling the opioid abuse epidemic.

ModoScript aims to lessen the paperwork load on doctors (by integrating seamlessly with electronic medical records, for instance) and to lower costs for insurance companies, “while providing pharmaceutical companies with a tool that will help them improve clinical trials in hopes of developing safer medications for patients,” says Zuleta.

This fall, Zuleta became one of NYSSTLC’s semester-long projects. Under the guidance of Professor Chris Horacek—and with help from third-year research associates Lindsey Round and Jennifer Hicks—the law center is helping Zuleta with patent, intellectual property (IP) and market landscaping; information on U.S. regulations and the Food and Drug Administration submission process; and business development issues, such as vesting agreements.

“The landscapes we provide are useful to the client and their attorney in the pursuit of IP protection,” explains Rudnick. “We always say ‘you don’t know what you don’t know,’ so this information helps the inventor or entrepreneur make a decision to keep going, pivot or simply stop. Because ModoScript is at an early stage, our research could actually influence the form and nature of the technology so they end up with a protectable technology that can achieve early market acceptance.”

Zuleta says that IP and market landscaping is also helping him develop marketing and investment pitches and—for the patent application process—prove novelty. Putting IP protections in place allows him to approach partners, mentors and investors with confidence, a process that has accelerated since ModoScript won MDIC and became involved with NYSSTLC. “I like to work with the best, and that’s especially important in the healthcare industry,” he says. “You can’t really walk into the offices of the big players in this industry as a student and expect to be taken seriously. To do so, you need to cultivate a high-level mentorship team. The bigger your dream, the bigger the reputation you need to build around it.”

The team that Zuleta has built in a short time is impressive. It is made up of regulatory experts, angel investors and a mentorship board, while advice also is coming from the CNY Biotech Accelerator, Empire State Development, Microsoft BizSpark, Syracuse University’s LaunchPad Blackstone, the Couri Hatchery, the Tech Garden and others.

To develop the prototype, Zuleta has put together a team consisting of Ph.D. mechanical, biomedical and computer engineers from Cornell University and Syracuse University, including Jason Hooper, Yunpeng Li and lead of product development Tiffany St. Bernard. The engineering team is charged with completing a prototype by the end of November when—as an MDIC finalist—Zuleta will be asked to test ModoScript’s efficacy. An innovation challenge pitch is scheduled for December in front of high-level SUNY-Upstate principals and outside investors.

“I started this company because I thought the healthcare system fails to provide patients with the proper treatment guidance they deserve,” notes Zuleta. “ModoScript is a patient-centered approach to drug safety and compliance. We want to educate patients about individual treatments and ameliorate physicians’ fears about prescribing controlled substances. We will initially target opioids, stimulants and anxiolytics, then expand into other highly monitored treatments such as cancer and cognitive disabilities. The opioid epidemic will get ModoScript into the market, but the technology will ultimately benefit everyone.”