The Seventh Annual It Girls Overnight Retreat took place on campus on Sunday and Monday, Oct. 22 and 23, bringing a group of high-achieving high school junior and senior girls to Syracuse University to learn about information technology as an academic discipline. 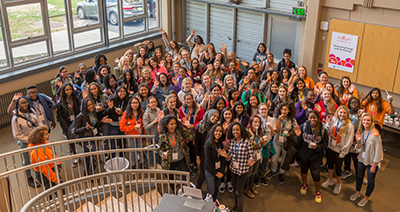 The event, organized by the School of Information Studies (iSchool), is designed to build confidence, inspire and create a pathway for girls to study information technology as an academic discipline. An essential piece of the program involves creating meaningful connections between professional women, iSchool alumni who work in the IT industry and the girls.

The program targets the significant gender imbalance in the science, technology, engineering and math (STEM) fields. While women hold nearly half of all jobs in the U.S. economy, they hold less than 30 percent of STEM jobs, according to the Science and Engineering Indicators report published in 2016 by the National Science Foundation. Females make up 41 percent of the undergraduate population at the iSchool.

Workshops Offer Glimpse Into IT Discipline
Ernst & Young (EY), GE, IBM, JP Morgan Chase & Co. and Synchrony Financial sponsored the retreat. Representatives of the companies, some of them iSchool graduates and past It Girls retreat participants themselves, volunteered to lead workshops and participate in panel discussions.

Held on Sunday afternoon, these workshops introduced the girls to different facets of the information technology field through lectures, short hands-on participatory challenges and coding assignments. The workshops were specifically designed to be reflective of the curriculum at the iSchool, to show the girls what to expect from an iSchool education.

JP Morgan Chase & Co.’s “CyberGirlz: Are You Safe and Secure Online” session presenters provided information on some of the dangers that teens face in the cyber world and how they can protect themselves online.

Representatives from Synchrony Financial ran a hands-on workshop focusing on introducing the girls to the user experience discipline by providing an opportunity for participants to develop wireframe mobile app mockups.

In the GE-sponsored “Escape the Lab” workshop, five students in the iSchool’s library and information science program designed and delivered a session that covered information literacy topics, search skills, and how to detect false information online.

iSchool faculty members and Ph.D. students teamed up with EY to host the “Bot to the Future” workshop, which allowed girls to create their own chatbots and explore the relationships between people and technology.

Members of the iSchool’s Information Security Club, some of them past It Girls participants themselves, held a session titled HacKnowledge, focusing on cybersecurity, hacking and the demand for experts with cybersecurity skills in the job market.

“Our program sponsors are a huge part of what makes this experience possible for the girls,” says Kim Pietro, assistant dean for advancement at the iSchool. “We’re grateful for their support of the program, and for their hands-on involvement in helping us deliver relevant, impactful and informative presentations.”

After the workshops and a dinner, the girls participated in the Late Night Challenge, organized by iSchool adjunct professor Laurie Ferger. The challenge allowed the girls to explore a project at the intersection of mathematics and design, using mathematical formulas to create different visual designs and representations. Prizes were awarded at the end of the challenge. 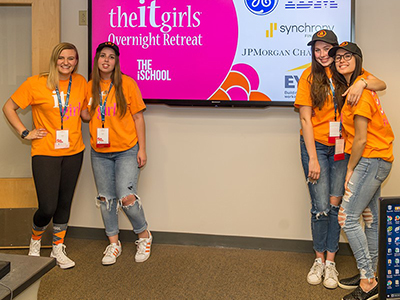 Students from the iSchool’s Information Security Club ran the HacKnowledge workshop during the retreat.

Of the 100 girls registered for this year’s event, over 40 percent had some technical or coding experience under their belts. Attendees this year also boasted the highest grade point average in all seven years, at 3.7, with more than a third having a perfect 4.0 GPA.

“The academic aptitude we saw this year was the highest it’s ever been,” notes Stephanie Worden, undergraduate recruiter for the iSchool, and lead organizer of the event. “This group was so engaged with the program, with the content and with each other, it was great to watch. Many of them formed some life-long friendships, I can tell.”

The two-day retreat wasn’t just spent in the classroom, it also included entertainment and fun—time on the ropes course, snacks and a movie before a sleepover in the Flanagan Gymnasium. The event’s closing ceremony on Monday afternoon featured a “speak out” at Hendricks Chapel, where many of the participants shared thoughts about what they learned, and what they thought an education and career in the IT field would bring.