On Wednesday, Oct. 25, Food Services is collaborating with the Sustainability Division to host a Taste of Central New York dinner in the dining centers and Goldstein Dining. The dinner celebrates our local food history and showcases some of our local vendors. 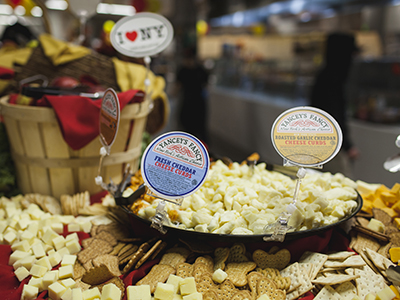 Original Pizza Logs, Niagara Falls
Menu Item: Original Pizza Log
The company began by hand rolling pizza logs over 25 years ago in a small factory. Eventually, the pizza logs became so popular that the company moved to a larger facility where they could ensure safety and quality. The snack is now sold across the Northeast.

New York Bakery, Syracuse
Menu Item: Beef on a Weck
Beef on a weck is a Buffalo favorite dating back to the early 1900s, when Charlie the Butcher took his business outside and began selling the sandwich to busy workers in the streets of Buffalo. The kummelweck rolls for the beef on a weck come from New York Bakery’s state-of-the-art facility located in Syracuse. It is a family-owned business in its third generation of ownership. They have been baking and distributing bread across the region for over 90 years.

Sal’s Birdland, Rochester
Menu Item: Sal’s Ribs
Sal’s Sassy Sauce has been a Rochester favorite since 1974. Customers in Sal’s Restaurants loved the sauce so much that Sal began selling it online. It is used on his trademark chicken, wedges and ribs. Sal’s sauce is also available in local grocery stores.

Gianelli Sausage, North Syracuse
Menu Item: Gianelli Sausage with Peppers and Onions
Gianelli is a family business that has produced sausage since 1946. Gianelli’s sausage with peppers and onions goes with the New York State Fair like apple pie and ice cream. You can do one without the other, but it just isn’t the same. Their sausage was voted one of the Best Local Foods for 2017. Today Gianelli sausage still uses the same award-winning recipe that gained fans from all over the Northeast and Mid-Atlantic.

Grandma Brown’s Baked Beans, Mexico, New York
Menu Item: Grandma Brown’s Baked Beans
These no-frills beans have been around since Grandma Brown began selling them during the Great Depression. The company prides itself in having a simple product that is naturally gluten free, low fat, contains no preservatives and is high in potassium. The company stands by its old-time values, keeping the same retro label and using no advertising to promote its product. No gimmicks are needed to sell this product; it stands on its own.

Syracuse Banana Company, Syracuse
Menu Item: Salt Potatoes
Salt potatoes may be the ultimate local food for Syracuse. These small potatoes are native to Syracuse, “the Salt City.” In the 1800s, salt springs around Onondaga Lake were used to create consumable salt that was distributed throughout the northeast via the Erie Canal. Laborers on the Erie Canal would bring a bag of small unpeeled potatoes to work each day and boil them in the salt brine for a satisfying lunch. Entrepreneur John Hinerwadel took note and began selling the small potatoes in five-pound bags along with some Syracuse salt. He also served the potatoes at the famous Hinerwadels clam bakes. They became popular and have spread far and wide as a summer picnic staple for more than a century. Syracuse Banana distributes the potatoes to Syracuse University.

Perry’s Ice Cream, Akron
Menu Item: Ice Cream Sundaes
Perry’s has been in business since 1918. Today, Perry’s is one of the two largest ice cream manufacturing plants in New York State. They make over 12 million gallons of ice cream per year. Ninety percent of the milk used to make the ice cream comes from farms within 50 miles of Akron. Some of Perry’s favorite ice cream flavors include ‘Cuse®44, Bad Breakup™ and Pumpkin Spice Latte.

Rod Father’s BBQ Sauce, Syracuse
Menu Item: BBQ Sauce
This sauce was created by Rod Wallenbeck, an SU Food Services employee. While taking a cooking/business plan class at Falk College, Rod was inspired to craft his own barbecue sauce based on his experience working in the Sadler kitchen. He put together a prototype, then tweaked the recipe until it was perfect. The sauce is sold in local grocery stores and online at rodfathersbbq.com

Enjoy this special dinner that commemorates many favorite foods of Central New York while paying tribute to our local vendors.