Physicists at Forefront of Multinational Experiment 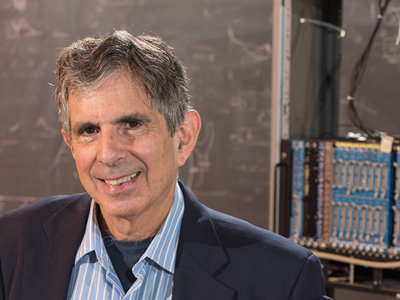 Physicists in the College of Arts and Sciences (A&S) continue to make inroads on the world stage.

The High-Energy Physics (HEP) group in the Department of Physics recently hosted the 85th Large Hardon Collider beauty (LHCb) Week in Lake Placid, New York. The purpose of the quarterly meeting—occurring three times a year at the CERN physics laboratory in Geneva, Switzerland, and once a year elsewhere in the world—is to share information about the ongoing LHCb experiment.

“LHCb sheds light on why we live in a universe that appears to be composed almost entirely of matter,” says Sheldon Stone, Distinguished Professor of Physics. “This experiment investigates differences in matter and antimatter by focusing on a particle called the ‘beauty quark,’ or ‘b quark.’ Since the Large Hadron Collider [LHC] creates different types of quarks, we use sophisticated detectors to catch b quarks before they decay into something else.”

More than 800 researchers from 16 countries participate in the LHCb Collaboration, which, among other things, detects and analyzes LHCb data. 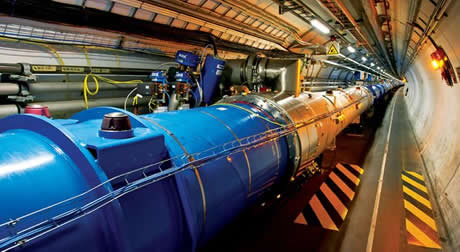 Central to their work is LHC, the world’s biggest, most powerful particle accelerator, located in Geneva. LHC hurls beams of protons in opposing directions through miles of vacuum until they collide with one another. The result is a blinding flash of energy that recreates the first moment of the Big Bang, nearly 14 billion years ago.

“We study subatomic debris from these collisions to learn more about the building blocks of matter and the forces controlling them,” Stone says.

HEP is a leader in these activities, and involves several dozen professors, research scientists and students—specifically, seven graduate students and 12 undergraduates. For the past two years, HEP has been building a special detector called the Upstream Tracker (UT). When complete in 2019, it will significantly increase the amount of data that LHC can process.

“Syracuse was well-represented at LHCb Week, both in our attendance and the quality of our presentations,” says Stone, a driving force behind the experiment who does physics analysis and detector hardware work. “We’ve been a valued participant of LHCb for many years, well before the Large Hadron Collider delivered its first collisions in 2010.” 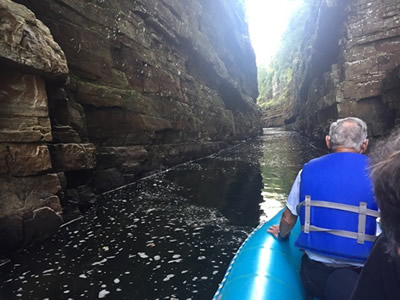 LHCb Week permitted physicists to soak up the “beauty” of Upstate New York.

Professor Tomasz Skwarnicki provided a brief overview of pentaquarks—exotic particles with five quarks. (Most particles have only two or three.) He was qualified to speak on the subject, having discovered two pentaquark states in 2015 with Stone and two other researchers with ties to Syracuse.

Stone describes pentaquarks—and quarks, in general—as a kind of scaffolding for protons and neutrons. “Our findings will help explain why protons and neutrons bind together in the nucleus of an atom and, ultimately, what constitutes matter,” he says.

Research associate Xuhao Yuan gave an update on the B hadrons and Quarkonia group, one of several dozen such working groups in the LHCb Collaboration. His presentation focused on the search for new states with b quarks and anti-b quarks.

An anti-b quark is a particle with the same mass as the given particle, but with opposite electric or magnetic properties.

Yuan also addressed the importance of the “weak force,” one of four fundamental forces governing life on Earth. (The others are gravity; the strong force, leading to the creation of protons and neutrons; and the electromagnetic force.) The weak force is synonymous with radioactivity.

“The name is misleading because the weak force is actually stronger than gravity,” Stone says. “It affects particles so big and heavy that their travel is confined to short distances.”

Fellow research associate Ivan Polyakov gave a status report on the UT Project, part of LHCb’s yearlong upgrade that begins in 2019. The UT, he said, will help address many important, unanswered questions about physics, such as “What is the origin of the difference between matter and antimatter, and is this difference related to the origin of matter in the universe?”

The UT consists of four ultra-thin, silicon detector planes that will replace LHCb’s existing tracker. Each new, 25-square-foot plane will produce data that is “read” by custom-built electronic integrated circuits. 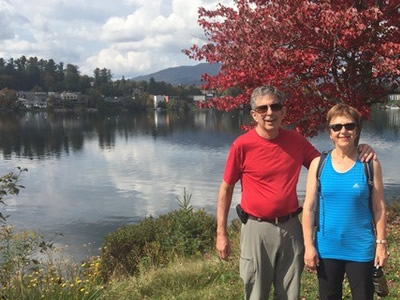 Professor Marina Artuso, who oversees the UT Project, says the new tracker will increase the amount of data that LHCb can handle by factors of five to 10. “Improved luminosity will permit more accurate measurements of fundamental particles, and will enable observations of rare processes that occur below the current sensitivity level,” she adds.

In addition to Artuso, Stone and Skwarnicki, the UT Project involves Professors Steven Blusk and Matthew Rudolph. All of them collaborate with researchers from CERN; the National Institute of Nuclear Physics in Milan, Italy; the University of Zurich in Switzerland; AGH University of Science and Technology in Krakow, Poland; the universities of Maryland and Cincinnati; and the Massachusetts Institute of Technology.

Undoubtedly, the UT Project—and LHCb, in general—is grooming the next generation of scientists.

One of them is Diane Portugal ’20, a physics major who makes carbon foam strips for the UT. While she considers the work a “small part of a colossal project,” Portugal is thrilled to contribute to one of the century’s biggest scientific breakthroughs.

“The best part about this position is that you’re not assigned mindless and tedious tasks,” she says. “You’re encouraged to delve into the ‘hows’ and ‘whys’ of everything you do. This has developed my leadership, collaborative and decision-making skills.” 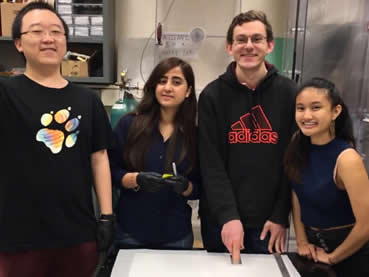 Charles Keppler ’18, who also makes foam strips, says the UT Project has taught him a lot about working in a “clean” environment, record keeping and project management. “I see how the big picture breaks down into thousands of smaller ones,” says Keppler, who majors in physics and applied mathematics in A&S and in aerospace engineering in the College of Engineering and Computer Science.

That Syracuse hosts people from other institutions exemplifies its collaborative ethos. Recently, students from nearby SUNY ESF have been helping with UT’s construction.

Joe Kulikowski, who majors in environmental resource engineering at SUNY ESF, does metrology and measurement systems analysis for the UT Project. “It has been one of the best learning experiences of my life,” he says. “It is work with a purpose.”