Syracuse Physicists Usher in a New Golden Age of Astronomy 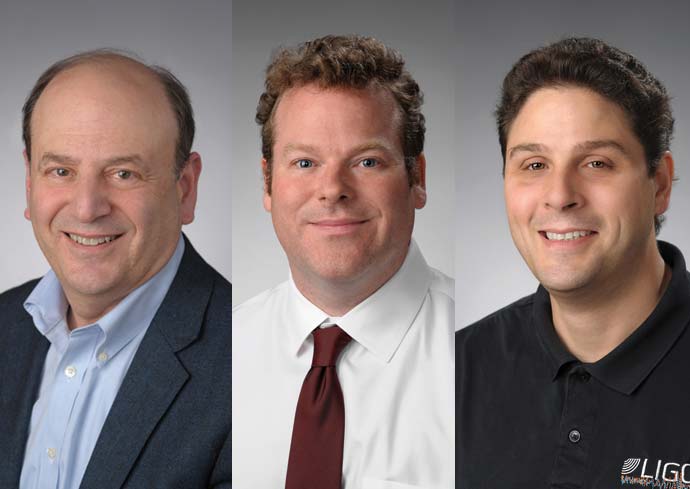 Syracuse University physicists are among a global team of scientists to make a revolutionary discovery confirming the origins of gold and other heavy metals whose presence in the universe has been a long-standing mystery.

On Aug. 17, just days before the total solar eclipse would mesmerize the country, the Syracuse team witnessed the telltale celestial event: the gravitational waves from the collision of two massive neutron stars in deep space—and the resulting afterglow that signified the process of gold being created from the cosmic smash-up.

The transformative discovery marks the first detection of colliding neutron stars by the Laser Interferometer Gravitational Observatory (LIGO) and the Virgo gravitational-wave detectors. Even more remarkable, it was the first time scientists were able to see the light from the collision with powerful telescopes that probe the farthest reaches of the universe. The public announcement today corroborates rumors and speculation about such a possible sighting that began swirling through cyberspace within days after the Aug. 17 event.

This is the second once-in-a-lifetime discovery to rock the astrophysics world in two years. And it not only confirms the origins of one of Earth’s most precious metals; it also opens a whole new window through which to probe the secrets of the universe.

“I would say that this probably will have a bigger scientific impact than that first detection of gravitational waves,” says Duncan Brown, the Charles Brightman Endowed Professor of Physics in the College of Arts and Sciences and a member of the LIGO Scientific Collaboration. “The first detection in 2015 opened the new field of gravitational-wave astronomy, but this detection answers many more questions about the universe.”

The breakthrough is credited to the unprecedented detection power of the two Advanced LIGO detectors, one located in Hanford, Washington, and the other in Livingston, Louisiana, combined with that of a third detector, the French-Italian Virgo, located in Italy. The images from the Aug. 17 event—two neutron stars, each roughly the size of Manhattan, colliding at one-third the speed of light—tell the story. 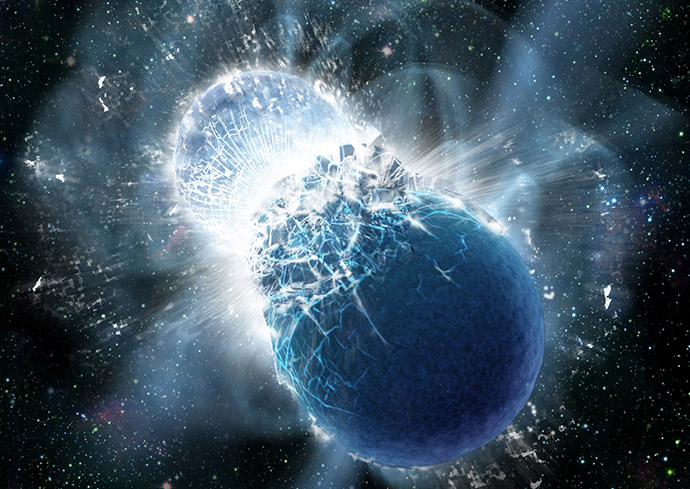 “The gravitational waves told us that these were two neutron stars colliding,” Brown says. “They also told us where to point telescopes to see the aftermath of the collision. With telescopes, we can watch the fireworks in electromagnetic waves and see neutron-rich material being thrown off and radioactively decaying. When you watch that radioactive decay, what you’re basically watching is space alchemy. It’s the universe creating gold and platinum.”

The observation settles a riddle that has puzzled scientists for more than 60 years: Where do gold, platinum, uranium, and other heavy elements, known as r-process elements, come from? Scientists had long suspected that they originated from colliding neutron stars; they now have visual evidence.

In the images captured from the collision and its aftermath, the beginnings of those elements show up as a bright flash known as a kilonova. The elements created get recycled into the galaxy as it rotates “over a billion or so years, and they wind up back in future generations of star systems,” Brown says. “At some point in the past, one of these collisions happened, producing gold and platinum, which eventually got recycled by the galaxy into the gold we find on Earth.”

“It was so thrilling to make that first discovery of gravitational waves,” says Peter Saulson, the Martin A. Pomerantz ’37 Professor of Physics and a fellow Syracuse member of the LIGO team. “But this time, hundreds of other astronomers are in on the act, and they’re thrilled too. It’s a much broader bit of excitement this time around.”

Stefan Ballmer, associate professor of physics at the College of Arts and Sciences and one of the builders of the Advanced LIGO detectors, agrees. “The complaint I heard from my astronomy colleagues about the first detection was that black holes are, well, black,” says Ballmer, who serves with Brown and Saulson on the Syracuse LIGO team. “As thrilling as it was to confirm Einstein’s prediction after 100 years, this breakthrough is a Rosetta stone that brings together the power of gravitational waves and light to probe the secrets of the universe.”

With this discovery, Saulson says with a smile, “we have confirmed that the shiny thing I wear on my finger was formed in the collision of two city-sized atomic nuclei at some distant point in the past.”

In the residue of the collision, observers could see the signs of this space alchemy at work—and the brilliantly glowing, neutron-rich debris that someday billions of years hence will enrich a new planet with veins of gold and platinum.

Brown remembers when he first got wind of the news. “It was about 9 in the morning, and I was in my office, meeting with a colleague. All of a sudden, I saw a bunch of alerts pop up on my computer screen. I unceremoniously threw him out of my office saying, ‘You have to leave now; the meeting’s over.’ ” 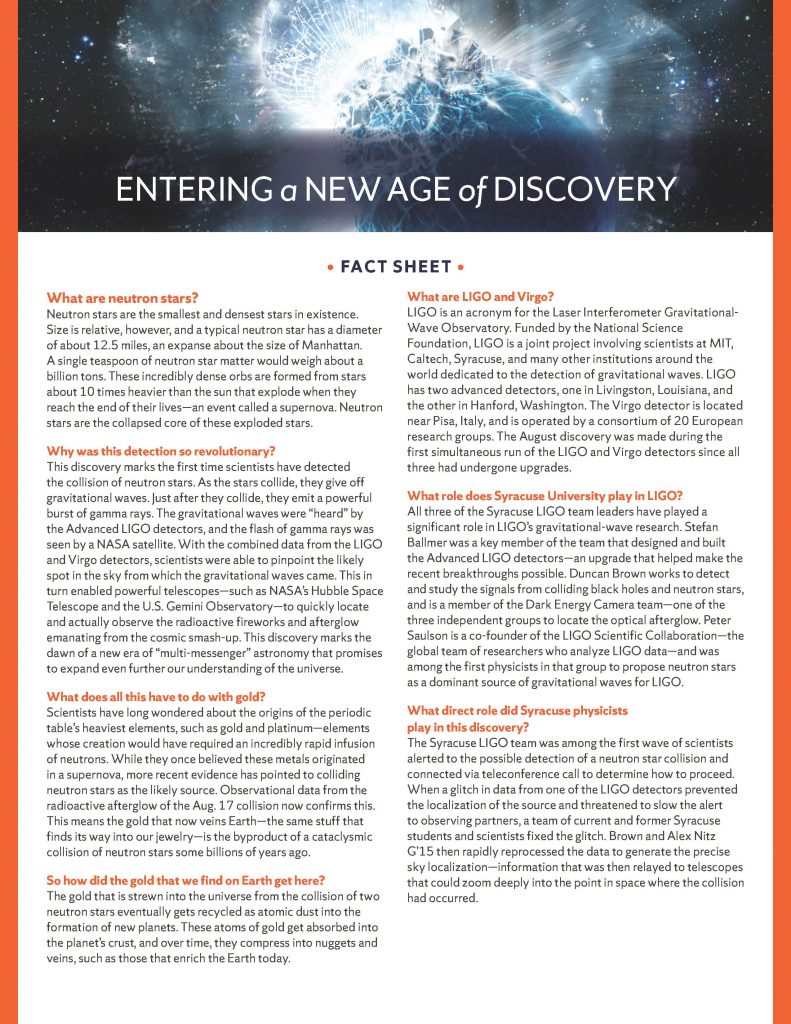 He immediately joined a teleconference call with other members of the LIGO team, and they knew within minutes that the alert was real. Unfortunately, a glitch in the Livingston LIGO detector data delayed the confirmation needed to localize the source. Fortunately, Saulson and Brown have trained a team of scientists, some located in Syracuse and others spread around the world, who immediately set out to work around the glitch by manually processing the data.

Once the cleaned-up data showed that Livingston also had recorded the gravitational wave event, Brown and former Syracuse student Alex Nitz helped prepare and dispatch the alert and sky map to telescopes that could zoom deeply into the point in space where the collision had occurred.

Brown is also part of a team at Harvard University that looks for optical flashes via a dark-energy camera mounted on a powerful, 13-foot optical telescope, known as the Blanco telescope. “After we sent out the LIGO-Virgo sky map, I tried to get hold of my collaborator, Edo Berger, at Harvard,” Brown says. “He was in a meeting, so I just kept texting, ‘GO GO GO!’ to his cell phone.”

“I remember seeing the first source localization maps and realizing that this particular patch of sky would be observable from Chile in just a few hours,” says Ballmer, who at the time was at the LIGO Hanford observatory. “A few hours later, my email inbox lit up again.”

And by the end of the day, Saulson says, they had the full story. The Blanco telescope located in northern Chile was one of three observatories to independently detect the flash in a small galaxy—NGC 4993—located 130 million light years from Earth.

The Syracuse physicists say that none of this—the detection of the collision, the visual confirmation, and the signs of gold and other heavy metals emerging from the residue—would have been possible without the unprecedented detection power of the two Advanced LIGO detectors working in tandem with the Virgo detector. “Many of us have invested our career into making these machines a reality,” says Ballmer. “It is tremendously gratifying to see all three detectors perform so well.”

“There’s no question,” Saulson adds, reflecting on a remarkable stretch of breakthroughs that are rapidly opening up whole new realms of astronomical exploration, “this is going to be the biggest story in science—this year.”