A Taste of Science

Area students got a taste of science, thanks to members of the Department of Chemistry. 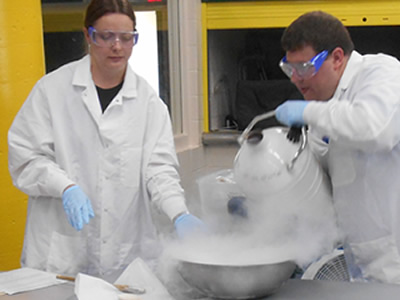 Their appearance was part of the YMCA Power Scholars Academy, presented in conjunction with Building Educated Leaders for Life (BELL) and the City of Syracuse Department of Parks, Recreation and Youth Programs.

“What happens when you combine cream, sugar, vanilla flavoring and liquid nitrogen?” Bonomo asked the rapt audience of local YMCA students. “You get delicious ice cream—the perfect treat for a hot summer day.”

The young scholars also discovered that, when they dipped a rose into liquid nitrogen, its petals froze. Bonomo explained how the cells in each petal contain oily membranes, which hold water. Freeze the cell, and the water turns to ice.

“The petals can break apart and shatter,” Bonomo added.

Liquid nitrogen was not the only thing on the menu. Scholars donned splash goggles and gloves for a lesson on slime. Working with a water-soluble polymer called polyvinyl alcohol (found in Silly Putty, Gak and glue), they added water, Borax and food coloring to make various gel-like substances.

“The ‘poly’ means it is a ‘polymer,'” he explained, clad in a white laboratory coat. “The Borax cross-links many of the polymer chains together to make a slimy toy that is fun to play with.”

Maley was thrilled to teach alongside her daughter, Kimberly ’09, a Baldwinsville elementary school teacher who works part-time for the Power Scholars Academy. “The event, especially the ice cream-making lesson, was enjoyed by everyone,” Deborah says. “We were honored to work with such enthusiastic scholars. Inspiring the next generation of scientists is truly rewarding.” 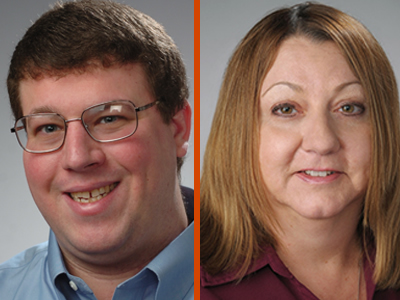 In the words of one young scholar, “It was the best day ever.”

Housed in the College of Arts and Sciences, the chemistry department provides graduate and undergraduate opportunities in organic, inorganic and physical chemistry.

The Power Scholars Academy is a free, five-week program for rising third, fourth and fifth graders in the City of Syracuse. Built on BELL’s evidence-based model, the program blends small-group instruction with immersive enrichment and community engagement activities. The academy is part of a nationwide initiative serving more than 4,600 K-8 scholars, many of whom are categorized as at risk.