Share
College of Arts and SciencesCollege of Engineering and Computer ScienceentrepreneurshipresearchStudents

ModoScript, founded by College of Arts and Sciences student David Zuleta ’18, is the only student startup selected as a winner in the statewide Medical Device Innovation Challenge (MDIC).  Seven ventures, including ModoScript, were selected for the prestigious MDIC acceleration program. Sponsored by Upstate MIND (Medical Innovation and Novel Discovery Center) at the Central New York Biotech Accelerator at Upstate Medical University, the competition was open to inventors, innovators and entrepreneurs who are developing life-changing medical devices and technologies, and need specialized assistance launching them in the marketplace. 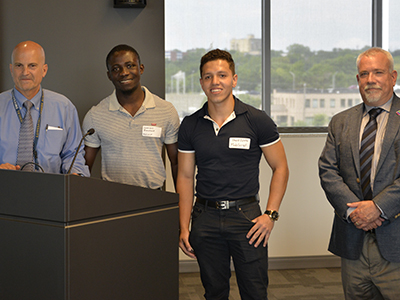 Winners of the MDIC will receive access to Upstate Medical University researchers and equipment, participate in an intensive “Concept to Commercialization Boot Camp” and have access to specialized tools, equipment and space within the Upstate MIND Creation Garage. The program provides intensive coaching from industry experts on how medical devices are designed, regulated and marketed, as well as what inventors need to know about U.S. regulations, the FDA submission process and other topics related to medical device and service commercialization.

Zuleta is completing his degree in neuroscience and biotechnology on the premedical track. ModoScript  combines his engineering and project development skills with his knowledge of the medical industry.  He worked at SUNY Upstate as an undergraduate, and interacted with physicians, pharmacies, health insurance companies and officers at the National Institute of Health. These experiences in the field convinced him of the need for a device like ModoScript.

Zuleta has been working on the venture in conjunction with the Blackstone LaunchPad at Syracuse University Libraries, the Student Sandbox and the Falcone Center for Entrepreneurship. ModoScript’s mentors for MDIC are Linda Dickerson Hartsock, executive director of the Blackstone LaunchPad at Syracuse University, and Sean Huckins, who is a researcher, department of neurosurgery, State University of New York Upstate Medical University, who also has a background in industrial design. Terry Brown, executive director of the Falcone Center, is on the ModoScript board of advisors.

Zuleta will be participating in the MDIC accelerator with two Syracuse University team members. Jaysin Lord ’18, lead software engineer, is completing an undergraduate degree in applied mathematics, with approximately 28 collaborative publications. Samuel Banahene ’16 and ’G17, lead mechanical engineer, has degrees in mechanical and aerospace engineering from the College of Engineering and Computer Science.

Dr. Robert Corona, Upstate’s pathology chair and vice president for innovation and development, adds, “The MDIC is a way to jump start this region’s push into the medical device market. We anticipate that at the end of the program, these start-ups will have determined if their medical device products or services have the commercialized viability, plans and prototype to move into the commercialization stage.”