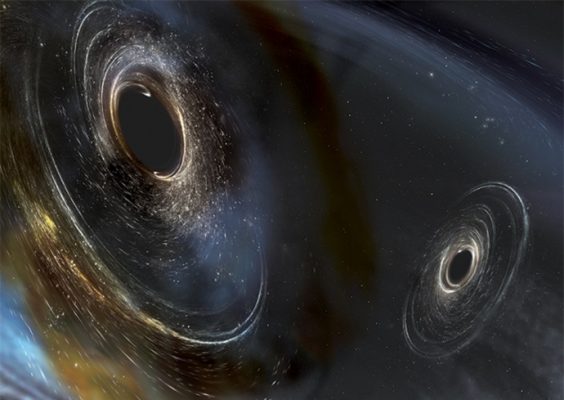 An alumnus of the College of Arts and Sciences has been instrumental in the Laser Interferometer Gravitational-Wave Observatory (LIGO)’s third detection of gravitational waves, demonstrating that a new window onto astronomy is fully open.

Alex Nitz G’15, who earned a Ph.D. in physics, helped detect the signal on Jan. 4, 2017, using a software package he began developing at Syracuse. As was the case with LIGO’s first two detections, the wave in question came from the merger of two black holes, resulting in the formation of a single larger black hole.

Nitz is a postdoctoral research fellow at the Albert Einstein Institute in Hannover, Germany. From 2010-15, he was a member of Syracuse’s Gravitational-Wave Research Group, part of the worldwide LIGO Scientific Collaboration.

LIGO is a national facility for gravitational-wave research, consisting of two massive detectors—one in Hanford, Washington, and the other in Livingston, Louisiana—that use laser interferometry to measure tiny ripples in spacetime, caused by gravitational waves from colliding black holes. 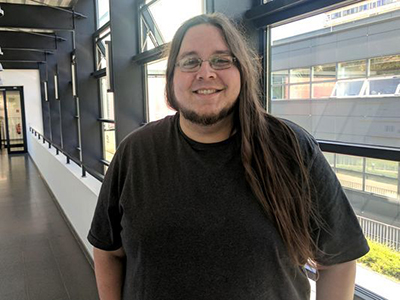 “We are extremely proud of Alex for helping detect the furthest binary black hole merger that LIGO has seen. These black holes are over 2.8 billion light-years away,” says Duncan Brown, the Charles Brightman Professor of Physics at Syracuse, adding that a light-year equals 6 trillion miles.

Stefan Ballmer, associate professor of physics at Syracuse, says the mass of the new black hole formed by the merger is 16 million times that of Earth. “Amazing, considering the newfound black hole is only a couple hundred miles across—approximately the distance from Syracuse to New York City,” he adds.

Nitz was in Hannover, examining data from LIGO Livingston, when he helped discover the new signal. “Normally, our analyses alert us of events observed by both [LIGO] detectors, but, on this day, data from LIGO Hanford was not being analyzed automatically,” Nitz says. “I knew that the data, itself, was good quality, so I decided to manually check if there was any sign of a corresponding signal in the other detector. What I saw made my heart jump.”

Nitz confirmed the findings with his colleagues, before reconfiguring the analysis to look for the signal in the recorded data from the two detectors. Again, the data produced a significant event, now known as “GW170104.”

“I alerted the group, beginning a process that woke up a lot of people a bit early in the United States,” says Nitz, a co-author of a paper about the discovery in Physical Review Letters (American Physical Society, 2017). “We compared the waveform to data we got from the detectors’ instruments, hunting for a small signal buried amid the noise. The analysis confirmed both instruments saw the same kind of signal at nearly the same time.” 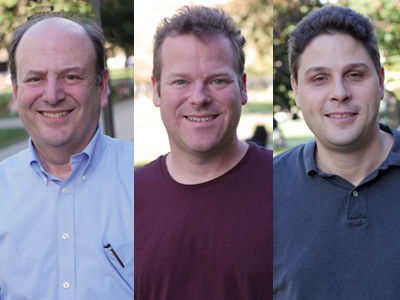 Central to the detection was PyCBC Live, a type of software Nitz developed that helps find signals and study their parameters. Although he began working on the software toward the end of LIGO’s initial phase, Nitz says that being at Syracuse during the project’s five-year upgrade, resulting in Advanced LIGO, helped him “get in on the ground floor” with people looking for gravitational waves from binary black hole mergers.

Ballmer, Brown and Saulson co-lead Syracuse’s Gravitational-Wave Research Group. With more than two dozen members, it is one of the larger, more diverse groups in the LIGO Scientific Collaboration.

LIGO is funded by the National Science Foundation (NSF), and operated by MIT and Caltech, which conceived and built the project. Financial support for the Advanced LIGO project was led by NSF with Germany (Max Planck Society), the U.K. (Science and Technology Facilities Council) and Australia (Australian Research Council) making significant commitments and contributions to the project. More than 1,000 scientists from around the world participate in the effort through the LIGO Scientific Collaboration, which includes the GEO Collaboration. LIGO partners with the Virgo Collaboration, a consortium including 280 additional scientists throughout Europe supported by the Centre National de la Recherche Scientifique (CNRS), the Istituto Nazionale di Fisica Nucleare (INFN) and Nikhef, as well as Virgo’s host institution, the European Gravitational Observatory. Additional partners are listed at http://ligo.org/partners.php.enter(