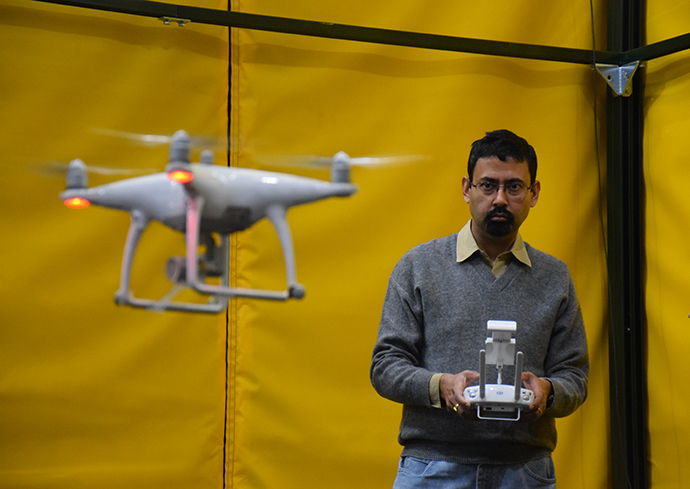 Amit Sanyal, associate professor of mechanical and aerospace engineering, pilots a drone in the test space at the Syracuse Center of Excellence.

It was a rare opportunity and one that College of Engineering and Computer Science Associate Professor Amit Sanyal and his doctoral student Sasi Prabhakaran G’15 wanted to make the most of. They had the chance to develop open space at the Syracuse Center of Excellence into an Unmanned Aerial Vehicle (UAV) laboratory.

“It was like creating a lab from scratch,” Sanyal says.

They had plenty of room to breathe and to fly inside a fully customizable space more than 20 feet high.

“We wanted to build something without constraints,” Prabhakaran says. “Sensors won’t give you good results if you are flying at a low altitude.”

Sanyal, Prabhakaran and a team of mechanical and aerospace engineering students designed a large cage where drones could safely fly while being tracked by a series of cameras mounted above. Everything from wiring and acoustics to minimizing structural vibrations was considered as the cage was put together.

“Years of work culminated in this,” says Sanyal.

“If you want to do something on that scale, you need to have this,” Prabhakaran says.

The UAV lab opened in October 2016 and has been busy from day one.

“We want to see them operating here so we can learn from each other,” says Sanyal.

Every UAV system being developed at the lab has its own challenges to solve and gives engineering students a unique opportunity to design solutions.

“Between industry and academic connections—the students can gain a lot,” says Prabhakaran.

While UAV technology has been advancing at a rapid pace, most commercial drone systems still are not able to operate autonomously in high wind or unstable weather conditions. “If the breeze catches it at the wrong angle, it comes crashing down,” Sanyal says.

Sanyal and his research team are developing an auto pilot system that uses specially designed algorithms to go through difficult weather conditions and be more efficient than piloting options currently available for commercial use. “We have built schemes that are inherently robust and stable,” he says.

The new lab also allows Sanyal and his team to bring in fans and create specific air disturbances to test their algorithms. He believes the application they are developing could go far beyond drones and may be used to provide auto piloting for unmanned systems in general.

“Robotic systems are going to be increasingly important,” Sanyal says.