Switzer, Boston Marathon Legend, Still Feels Old Friend from Syracuse at Her Side 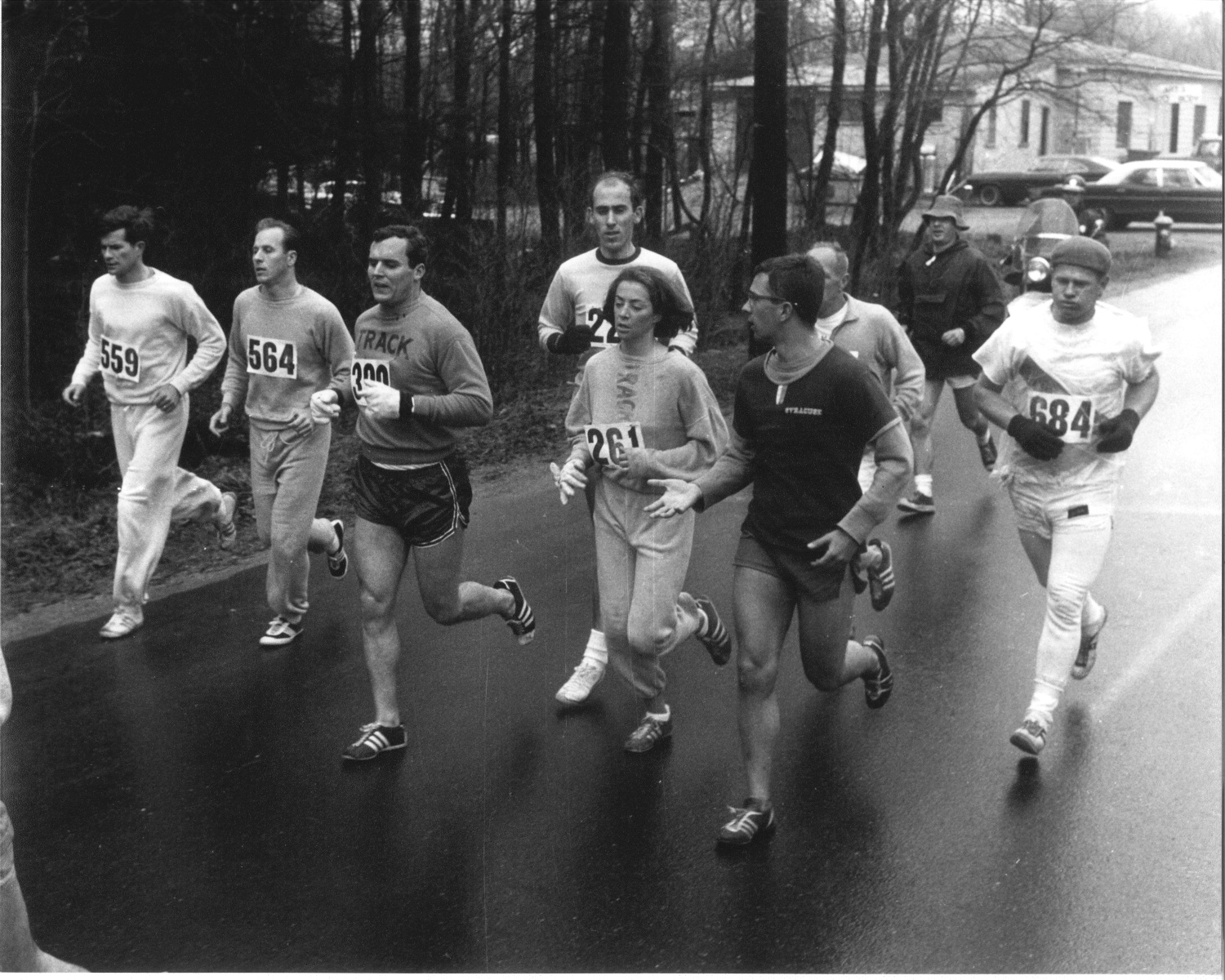 Kathrine Switzer running in the 1967 Boston Marathon, just after a race official tried to force her out of the race, which was not open to women. Photo credit: Brearley.com

For Kathrine Switzer, a pivotal moment in running history really began with a challenge in a snowstorm.

She was a student at Syracuse University in December 1966 when she went on a long run with Arnie Briggs, a Syracuse letter carrier who also served as her coach. As they often did, they spoke as they ran about the many times that Briggs had conquered the Boston Marathon.

As Kathrine recounts in her memoir, “Marathon Woman,” she said to him: “Oh, let’s quit talking about the Boston Marathon and run the damn thing!”

The problem: At that time, women were still barred from the race. Briggs replied that women were “too fragile” to complete a marathon. Switzer wasn’t buying it. When she fiercely responded that she was capable of running 26 miles, Briggs told her—once she proved it—he would take her to Boston. 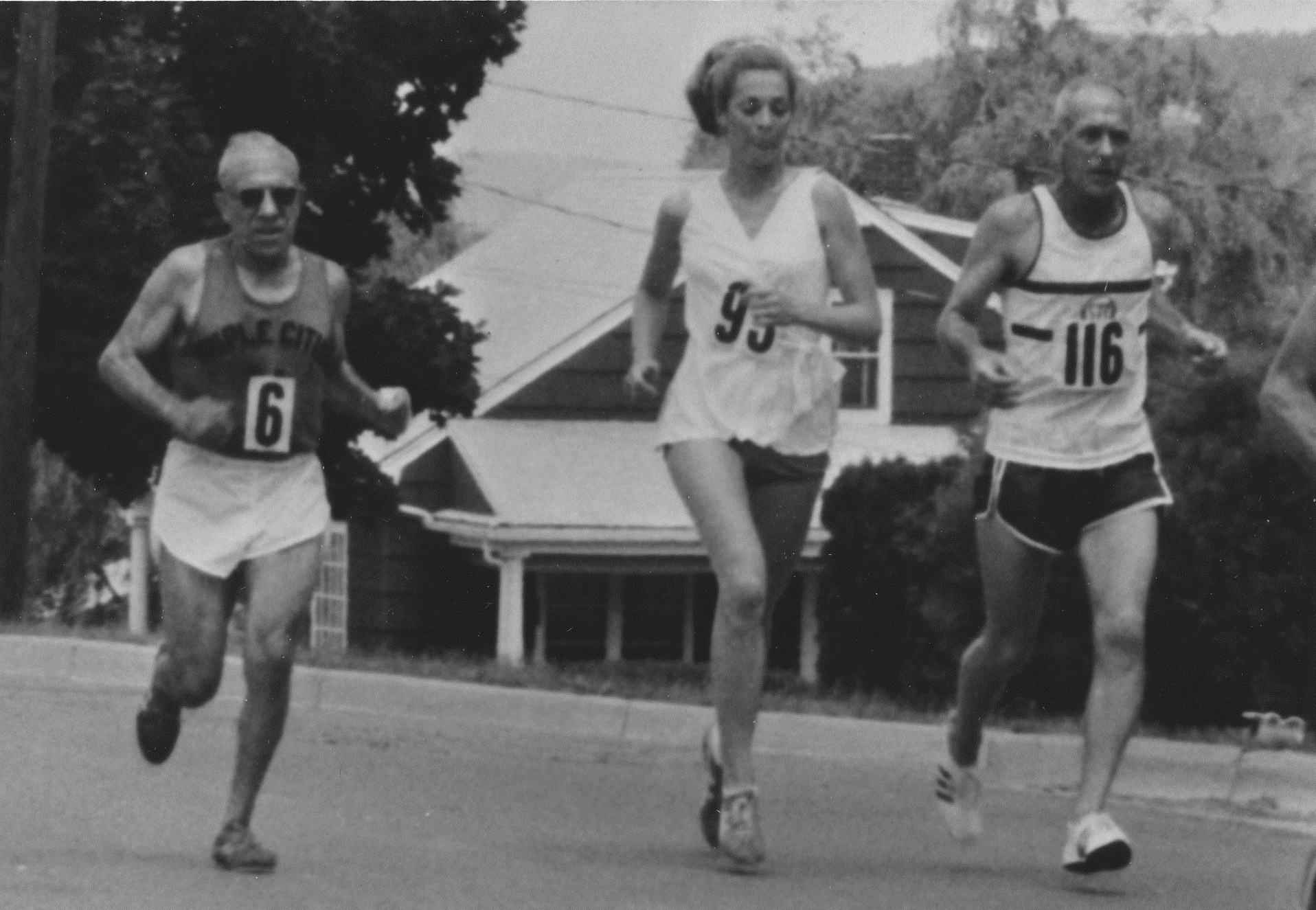 This week, a half-century later, officials in Boston announced they’ll retire Switzer’s bib number from the 1967 race, making her only the second person in the history of the event to earn that honor. The other number belonged to John Kelley, who ran Boston 61 times.

Switzer, now 70, became an elite marathon runner and an inductee into the National Women’s Hall of Fame in Seneca Falls. Monday, she will be among tens of thousands of runners who go to the starting line in Boston.

Fifty years after she shattered a ban on women runners by entering that famous marathon—and then finishing, even after race manager Jock Semple tried to drag her from the course—she will be a center of attention for world media, thanks to all she proved as a 20-year-old student at Syracuse.

“She has no idea how important she really was,” says Lennie Tucker, a friend of Switzer’s, a longtime runner and track official in Central New York—and a woman who recalls a time, not so long ago, when she rarely saw other female distance runners training on country roads.

“Kathrine had to invent the role she played,” Tucker says. “She had to become something many people couldn’t possibly see. She made people realize she had a mind, and she could run, and she could be free.”

Switzer made her epic run in the company of Briggs, a letter carrier and a World War II veteran who for years was a kind of running institution at the University.

This week, through publicist Laura Beachy, Switzer recalled how she’d “wanted to run Boston ever since I first heard of it.” Briggs, she says, embraced that potential. He provided the impetus with his challenge, then was at her side at the race.

He died in 2000, at 84, but Switzer says he’s “been on my mind every day for the last two years as I have been doing my training, and I’ve been talking to him a lot and asking him advice and asking him to help me in the race.”

Even before Briggs met Switzer, he was a pioneer in the Central New York running community. Bruce Laidlaw ’54 recalls going to the old Roosevelt Field in Syracuse for a workout in 1949, and meeting Briggs and the late Joe Ficcaro for the first time while they ran on a cinder track at that high school complex. 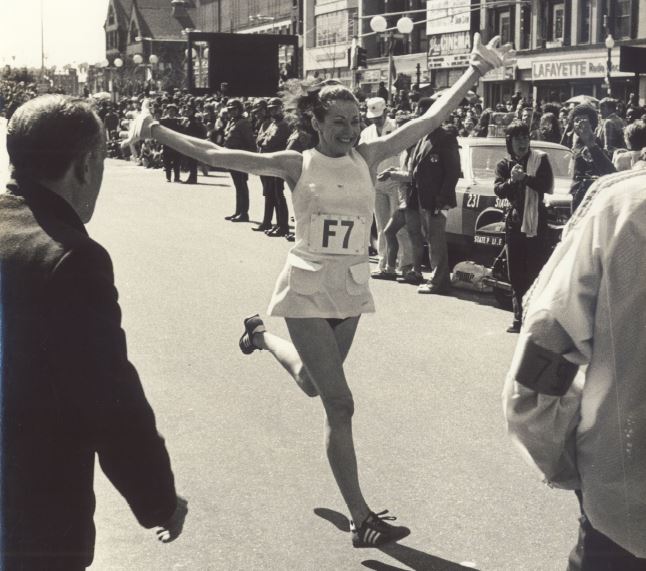 Laidlaw was impressed. They were running distance, he says, “at a time when people didn’t run. In those days, if you ran distance in shorts, dogs barked and people came out on their porches to look.” Briggs once told Laidlaw he made good use of running when he served as a paratrooper during the war, and had to survive on wits and stamina.

After Briggs came home to Syracuse, Laidlaw says, “He WAS the running community.”

He also became a regular presence, a guiding force and coach, around the track for decades at the University. He would quietly adopt and encourage younger runners—as he did years later, with Switzer.

“Everyone loved him,” says Tom Coulter, who ran on a national championship cross country team at Syracuse in 1951 and later became an Olympic boxing coach. Jerry Smith, another veteran runner in the region, describes Briggs as “a wonderful guy, the kind of runner who understood that if you have a chance to give back, it’s what you do.”

Tom Homeyer of Tully, a Central New York running legend who is preparing to tackle Boston for the 48th time, calls Briggs “a man well ahead of his time, an inspiration for all of us.” Briggs ran Boston 24 times, and in 1952 finished 10th in the race.

Homeyer, like so many others, recalls the power of the bond between Briggs and Switzer, the joy Briggs found in watching Switzer ascend and succeed. Homeyer remembers seeing them when they’d all cross paths during runs in the countryside. It was long before the time of sleek all-weather running clothes, and Briggs and Switzer would be wearing baggy gray Syracuse University sweat suits. 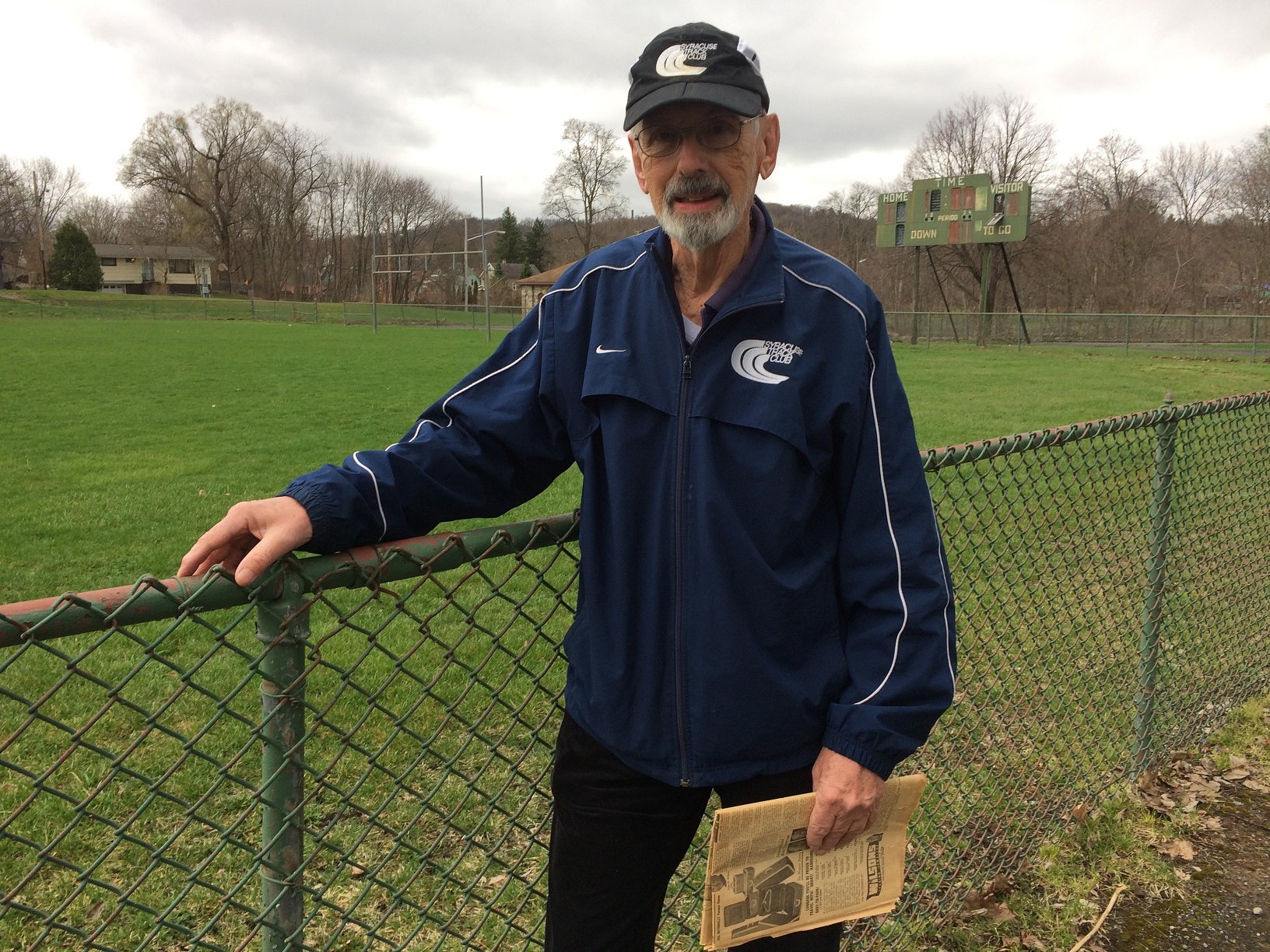 Bruce Laidlaw at Roosevelt field, where he met Arnie Briggs almost 70 years ago.

Briggs was evangelical about running, a quiet pioneer. Maybe he sensed—on some intuitive level—how Switzer would be at the forefront of an explosion of interest in women’s running.

By race day in 1967, Switzer had made her point with relentless training. Briggs was no longer skeptical. In Switzer’s memoir, she recounts how Briggs drove her to the marathon, accompanied by her boyfriend of the time, Tom Miller, who threw the hammer for the University track team, and John Leonard, who ran cross-country at Syracuse. Before the race, Briggs picked up the packet with her number and name, simply marked down as “K. Switzer.”

They were among 741 runners at the starting line. The first few miles went without incident. But at mile four, an angry Semple chased after Switzer, then tried to grab her number and drag her from the race. “Tiny, brave Arnie,” as Switzer described him in her memoir, did his best to intervene—until Miller knocked Semple out of the way with a full-blown block. 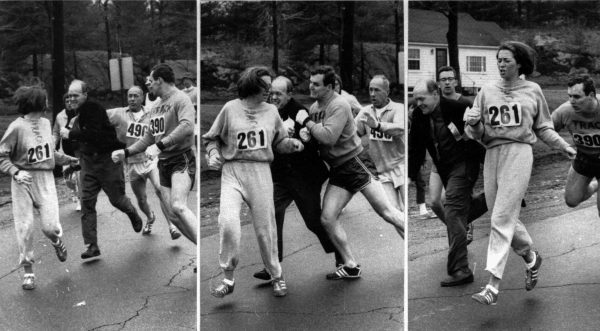 A race official is blocked by Thomas Miller as the official attempts to forcibly remove Kathrine Switzer from the Boston Marathon on April 19, 1967, in Hopkinton, Massachusetts. Photo credit: Boston Herald

Photos from that moment would make Switzer a legend. After that, it all came down to the purpose that brought Switzer to Boston:

She bore down and finished the race.

This week, she serves as a living international symbol of how women athletes have emerged in the last 50 years—and by running the marathon again, she offers a statement on how youth and fitness are not based on age, but on state of mind.

Yet she often thinks of the first and most important mind she changed, belonging to a letter carrier from Syracuse named Arnie Briggs.

“He was the most totally generous and giving person I have ever met, and it wasn’t just me he helped and encouraged,” Switzer says. “It was many, many people …. who really needed guidance, sheltering and encouragement.” This was the kind of human being, she says, who would go to a race and coach, work the gate and clean up litter afterward, which is why the Syracuse Chargers Track Club created an “Arnie Briggs Good Guy Award.”

Briggs, a working guy who loved running, made time to train alongside a young woman who’d help transform the running world. When you have a longtime running companion, Switzer explains, there is an almost spiritual communion to the miles of silence. Your friend becomes “an ongoing memory, sort of like a shadow when you run.”

In that sense, Briggs will again be at her side Monday, in Boston.

EDITOR’S NOTE: Kathrine Switzer will return to Syracuse on April 25 to serve as keynote speaker for the Women Igniting the Spirit of Entrepreneurship (WISE) symposium. Her talk, titled “Breaking Barriers,” will wrap in both her professional and personal triumphs—including the historic marathon.