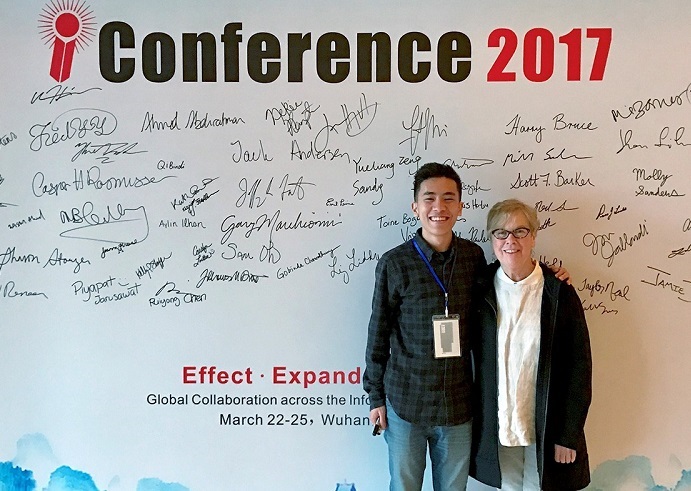 How immigrants use social media, digital communications technologies and mobile applications to interact with their communities and families is the subject of an undergraduate research project that brought School of Information Studies (iSchool) junior Alexis Ho-Liu to China last week, where he presented his work at the iConference.

Coordinated by the iSchools Organization, the iConference is an annual academic conference that brings together researchers affiliated with information and library science institutions from around the globe.

Ho-Liu, a student in the iSchool’s B.S. in Information Management and Technology program, was one of a handful of undergraduate students at the conference, invited to present the research he conducted as part of his experience with the iSchool Inclusion Institute (i3), a summer undergraduate research program hosted by the School of Information Sciences at the University of Pittsburgh.

“Early in the spring of my sophomore year, I decided to apply to i3, because I thought it would be a good way to introduce myself to the world of academic research,” Ho-Liu says.

The program is held on the University of Pittsburgh’s campus, and emphasizes teamwork among interdisciplinary project members. The research and leadership development program that prepares undergraduate students from underrepresented populations for graduate study and careers in the information sciences. The highly selective program takes only 25 students in each cohort.

“The program was structured in a way that provided us with a number of workshops across different areas,” says Ho-Liu, “with faculty members from Pitt, Carnegie Mellon and other universities helping us to select and start on our research projects.”

After the initial four-week summer session, Ho-Liu and his team went back to their respective institutions and began collaborating on their research project remotely. The team completed their literature review and submitted a poster proposal detailing their research project to the iConference organizing committee, which approved their project for presentation at the 2017 conference in Wuhan, China.

“I was initially intimidated by the idea of presenting academic research at the iConference as an undergraduate,” Ho-Liu says. “But I found that people in academia are open to learning from from all levels, and the masters- and doctoral-level colleagues we met at the conference encouraged us to keep researching and gave us helpful advice—it showed me what the environment of academia is like.”

As a child of immigrants from China, Ho-Liu’s research topic is close to home, as he sees how his own parents use digital media for communication. “Many of my team members also come from immigrant backgrounds, so we’re looking at the digital divide, and why some populations prefer one application over another,” he explains. “My parents, for example, use WeChat exclusively, so we want to figure out what makes that application a preferred one over Facebook, or another messaging app.”

Ho-Liu hopes that the findings from his project will eventually be used by developers to make decisions about the design, usability, accessibility and inclusivity of their apps.

“We’re only in the initial stage of research now,” says Ho-Liu, “but we’re soon going to move into interviews and then the assessment phase next, evaluating immigrant populations via a survey.”

Although the i3 research opportunity provided a good introduction to an academic research career path, Ho-Liu still is unsure where his future lies.

“The week before I went to Wuhan, I was on the iSchool’s Spring Break in Silicon Valley trip,” he says, “so I was able to get both an industry perspective and an academic perspective back-to-back. But it’s too early to say where I think I’ll end up—I’m open to exploring both options. Based on my skills and experience, I think I’m leaning more towards a tech job, but I’m not sure yet,” he says.

Ho-Liu will spend this summer at GE Digital in Chicago, as an intern in their Digital Technology Leadership Program. He hopes the experience will give him more insight into what an information technology industry career would be like. 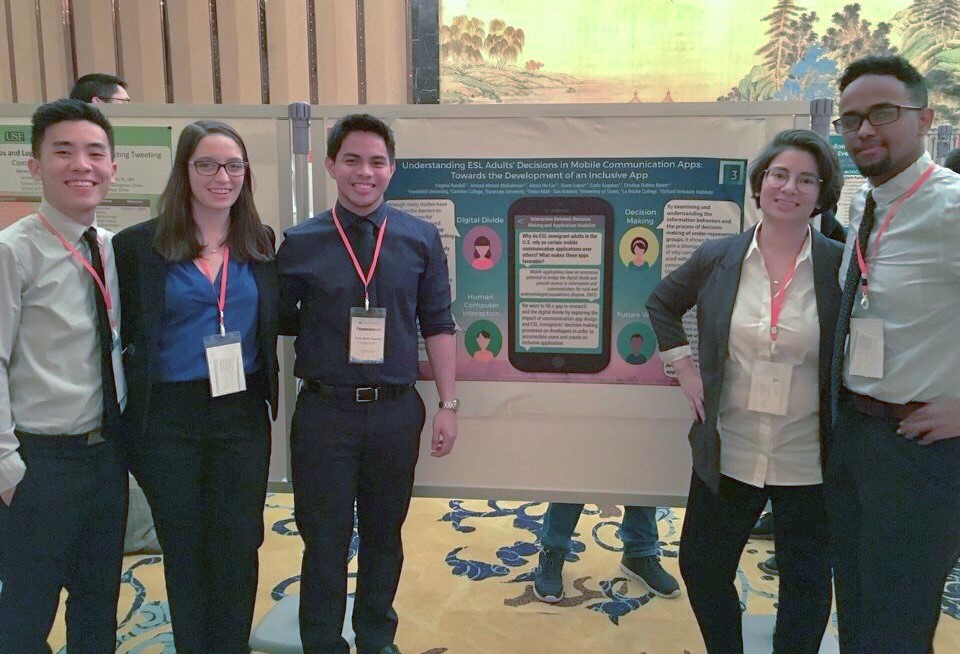 Undergraduate researchers with their poster at the iConference. From left to right, Alexis Ho-Liu, Virginia Randall, Carlo Sugatan, Diane Lopez and Ahmed Abdirahman

“I’m thankful that the iSchool gave me the opportunity to experience an academic conference, I’m grateful to Dean Liddy for the support,” Ho-Liu says. “And [associate dean for research] Kevin Crowston has helped me explore research here at the iSchool and provided advice on our poster, he’s been a good source of support as well.”

“The experiences I’ve had at the iSchool are helping me to make decisions about what I want to do with my life,” says Ho-Liu. “I think it’s important for students to assess their options early on and see what they want to do, and to take any opportunity that they can to expose themselves to different experiences.”

Ho-Liu’s research team from i3 includes Ahmed Abdirahman from Carelton College, Diane Lopez from Texas A&M University, Virginia Randall from Vanderbilt University and Carlo Sugatan from the University of Guam. More information on their research project can be found on the Team AppGap website.