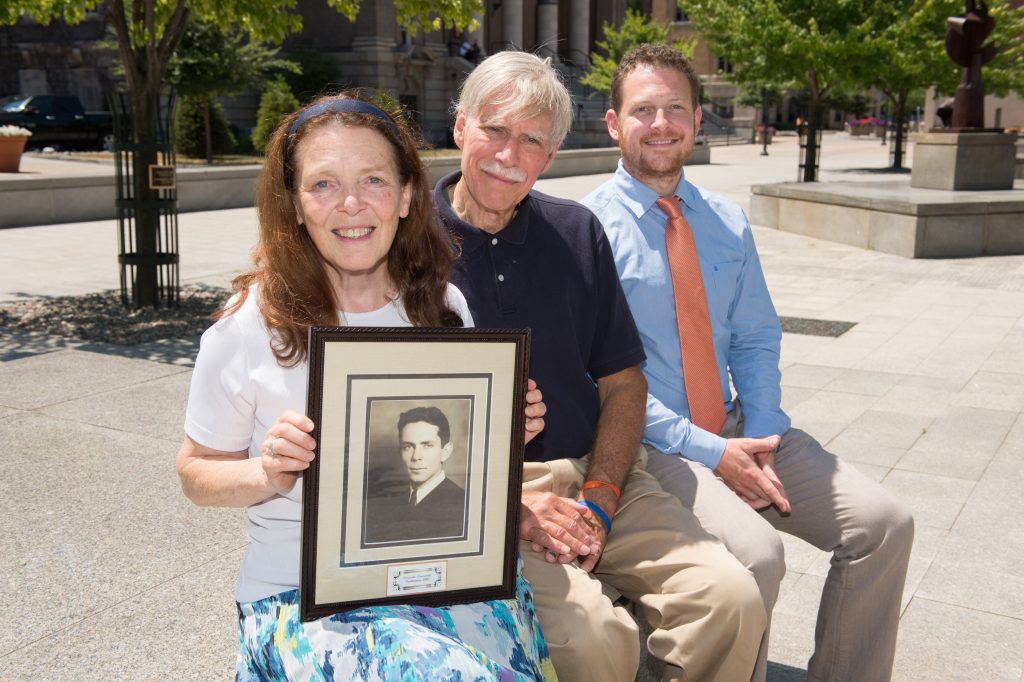 The Richard J. Taylor Memorial Scholarship has been established in the College of Engineering and Computer Science. Instituted by a generous donation from his family, the fund provides scholarship and financial assistance to students enrolled in the college, with preference to those majoring in aerospace engineering.

Richard (Dick) Taylor ’38 graduated from Syracuse University with a degree in mechanical engineering, although he also took every aeronautical course available at the time. His own education only begins to define Taylor. His love for Syracuse led many of his family members and extended family to attend the University. The Taylor Memorial Scholarship is established in his memory by his daughter, Kathleen (Kathy) Goodman ’65, G’73 (Education), son-in-law Louis (Jack) Goodman ’68 (A&S), G’71 (Education), grandson Nicholas (Nick) Goodman ’03, G’05 (iSchool), as well as his son, William (Bill) Taylor, who took graduate-level courses in history in the Maxwell School.

Taylor, who died in 2009, was an accomplished engineer with decades of experience in aircraft, aeronautics, weapons systems design research and systems analysis studies. He was deeply devoted to his family and his passion for flight.

Charles Lindbergh became his hero and inspiration after his solo flight across the Atlantic Ocean. At age 13, Taylor built his first full-sized glider from scratch and eventually flew it in the valleys south of Syracuse. At 16, he became one of the youngest people to earn a pilot’s license. After that accomplishment, he enjoyed flying his father to business meetings all around the country in a Stinson Reliant. While attending SU, he became a member of Theta Tau professional engineering fraternity for leadership, service, profession and brotherhood, role #177.

Upon graduation from Syracuse, Taylor was employed at Curtiss-Wright as a design layout engineer, working on World War II aircraft. The company was founded in 1929 as the Curtiss-Wright Corp., a merger by Glenn Curtiss, the father of naval aviation, and the Wright brothers, renowned for history’s first flight. In December 1945, 546 employees closed the initial chapter in the company’s history as the Curtiss-Wright Research Laboratory. Thirty years later, 22 original staff were honored, including Taylor, as the founding charter members of Cornell Aeronautical Laboratory. Later in his career, he was asked to consult with Bell Labs, Douglas and Lockheed aviation companies and was an analyst, group leader and section head in the operations research department at Calspan (formerly Cornell Aeronautical Laboratory), where he analyzed missions for the U.S. Navy and Air Force.

Taylor worked with other experts on military weaponry concepts and feasibility for the Navy and the Air Force. Highlighting his top projects, among others:

“During the Gulf War in the early ’90s it was very rewarding to see many of the concepts and hardware he worked on come to be used in real life,” says Bill Taylor, remembering his father. “At that time, there were many people who believed that these weapons systems were far out into the future or would never be fully accomplished in his lifetime. Despite many anti-war protests and being against war himself, my father believed that having the strongest and most highly technical military would help prevent war.”

On top of his many professional accomplishments, Taylor was a man of exceptional character and a dedicated patriarch to his family. “Dick was an amazing person. He was an old-fashioned kind of guy who was totally devoted to his family,” recalls his son-in-law, Jack Goodman. “The best part of his day was coming home and being with his wife, Pauline, and children. Dick loved spending evenings after dinner doing homework–usually math–with Bill and Kathy. Dick was consistently caring, thoughtful and generous. He was very knowledgeable in a humble sort of way. People felt comfortable seeking his advice and conversing with him on a wide variety of subjects.”

In his later years, Taylor remained intrigued about emerging technology and how it related to his own career throughout the years. At work, the only computer he had access to was a main frame housed in a large two-story building, yet a great deal of his mathematical calculation was done with a slide rule. His grandson Nick recalls, “Much like aviation was the technological path of the future during his career, my grandfather inspired me to develop a passion for computers and technology in the late ’90s and early 2000s, which has become my own career path.”

His daughter Kathy remembers his kind and gentle manner, strong commitment to family, and his down-to-earth personality. “My father never lost his inner child and had a great sense of humor,” she says. “He loved being playful with his grandson Nick and other relatives and friends of the family. My dad was a wonderful companion and teacher. He was a curious man who thrived on analyzing and solving problems, and left us a legacy of unwavering patience, kindness and unconditional love.”

Taylor truly loved all that life had to offer. He followed SU sports and started out attending football games in the old Archbold Stadium. At age 93, he was still walking to basketball games at the Carrier Dome and climbing up to section 309, row O to cheer on his beloved Orange.

The Niagara Frontier Aviation and Space Hall Museum has honored Taylor by engraving his name on a wall as one of the early pioneers. He was also awarded an honorary plaque for his contributions to the B-1 bomber. Using his engineering background, he was a meticulously detailed builder and pilot of radio-controlled airplanes and a very early member of the Academy of Model Aeronautics.

In retirement, Taylor became an accomplished oil and acrylic painter and also worked with stained glass. Sailing was always a summer highlight on both Cross Lake and Fourth Lake in the Adirondack Mountains. The Red Cross awarded him a special pin for becoming a 50 gallon+ blood donor. In 2002, Syracuse hosted an air show where he had the opportunity to tour a Lockheed C-130 Hercules and spoke to the pilot about technology he had worked on that is still used today.

The request from the family is that the recipient of the scholarship be a person like Taylor: a scholar, someone who loves aeronautics and flying, and a person of integrity and good character.

The Richard J. Taylor Memorial scholarship has been awarded for the first time during the 2016-17 academic year, and the college will honor his family’s request to identify a student that meets the high standards of Taylor himself for this year and years to come.