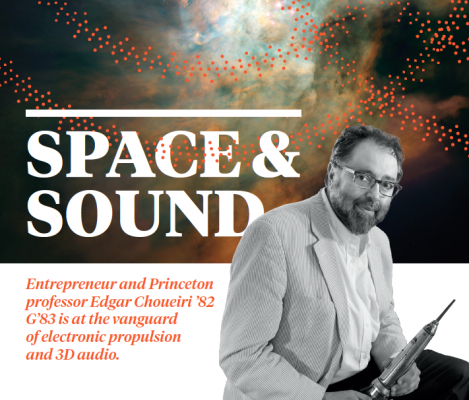 now and you must be well above 30. Although you exist in a different time, I am talking to you through this machine I have in my hands. I’m not sure if this tape will survive. I would love it if I had become an astronaut or you were working in aerospace and electronics or playing with instruments.”

The “I” and the “you” in the recording are both Edgar Choueiri ’82, G’83, separated by time. This eerie audio from his younger self, discovered among old compilations of Beatles and Louis Armstrong tracks, predicted his future with exceptional accuracy. “The first time I heard this recording, I was completely shaken,” Choueiri says. “The little boy was speaking to me. Nothing has changed. I had the same passions then that I do now—space, music, and sound.”

About a decade after he first recorded that message in a bottle, Choueiri was at Syracuse University studying aerospace—obsessed with a book titled “Physics of Electric Propulsion” by Robert Jahn. Spacecraft had always relied on chemical propulsion, and this new field was in its infancy. Choueiri’s mentor, Professor John LaGraff, connected him with an aerospace professor at the University of Pisa, Mariano Andrenucci, and Syracuse aerospace professor Frederic Lyman to delve deeper into the topic, and it set him on a course to study the futuristic concept with Jahn himself at Princeton University.

“The idea is to use electrical power instead of chemical reactions to produce thrust to travel through space,” Choueiri explains. “When I was in Syracuse, these rockets were still science fiction for the most part, yet LaGraff, Andrenucci and Lyman encouraged my pursuit. Today, this is a multimillion-dollar industry. SpaceX is hiring people in this field because they want to use it for their Mars missions, and nearly all geosynchronous spacecraft are switching to this technology.”

Today, Choueiri works in the same aerospace department that Jahn had when he wrote the book that inspired Choueiri during his time in Syracuse, and he is now an expert in the field. However, his 11-year-old self had greater plans than becoming an aerospace engineer alone.

Like so many alumni, Choueiri’s Syracuse educational experience went beyond his selected major. He has always had a great love of music. As a student, he spent hours in E.S. Bird Library absorbed in the overwhelming catalog of vinyl albums—from the early age of music, all the way to modern music. He also took courses in electronic music with American composer Franklin Morris and spent every Saturday night in the Electronic Music Laboratory in Crouse College working on original compositions. He says, “I couldn’t have a normal dating life because I spent so much time in that lab.”

While he didn’t pursue music or sound academically after Syracuse, it remained his primary hobby. He built a recording studio in his home and spent his spare time recording Princeton’s Symphony Orchestra. It was there that an entirely new research focus first emerged for Choueiri.

“You can capture very good tonal realism, but I found myself frustrated with the spatial realism of the music I was recording. It sent me on a trajectory to uncover how to deliver recorded audio three-dimensionally.”

If you have ever seen a movie with surround sound or listened to a song in stereo, you might assume that you’ve already experienced 3D sound, but you haven’t. For the brain to experience true 3D audio, your right ear can only be permitted to hear the sound emitted by the right speaker, and your left ear should only hear the sound coming from the left. If one hears the “crosstalk” in both ears, the cues that your brain uses to determine where sound is coming from become corrupted and the effect is lost. Choueiri has developed an electronic filter that blocks the crosstalk between speakers and preserves the cues our brains receive. “It’s like putting a mattress between two speakers,” he explains.

Featured in The New Yorker, Atlantic and on NPR, it is called the BACCH™ filter. Available commercially on Jawbone’s Jambox, it can create a 3D audio environment around you from only two speakers, and fits in the palm of your hand. It is also available in a more advanced $54,000, no-expense-spared version tailored to audiophiles, called the BACCH-SP that delivers audio that is actually customized to the shape of the user’s head.

In demos of the technology, Choueiri operates like a magician. He holds the Jambox up to your face and plays “Money” by Pink Floyd. At first, it sounds just as you’d expect. Then, when he engages the BACCH™ filter, you suddenly hear the thrumming of the guitar and the whirring and chimes of a cash register all around you. And not just to your left and right. It completely envelops you.

For his next trick, he plays the sound of a box of matches being shaken. Again, quite ordinary at first, but when the 3D kicks in, you literally feel as if an invisible man is encircling you, rattling the box as he moves. Recorded binaurally using a dummy head, the 3D effect is nearly flawless.

Using the BACCH-SP, he unveils the richest experience yet. The room erupts with an a capella choir singing a Latin hymn. The music engulfs you. You turn your head and expect to see the tenor standing next to you, the soprano to your left. Close your eyes and it feels like you are sitting on the altar with the performers surrounding you in a horseshoe.

Each experience is so real it’s breathtaking. Fortunately, in the coming years, Choueiri foresees 3D becoming more accessible to consumers, being introduced to home and car stereo systems.

For a man who is so clearly at the bleeding edge of two innovative advancements, Choueiri remains kind, affable and eager to share his work. He’s deeply grateful to the men who helped him reach the point he is at today: “My work in propulsion and 3D can both be traced back to professors that inspired me at Syracuse University. My experiences there changed my life, and it can do the same for any young person that is willing to take advantage of everything the University has to offer.”

While it is true that his training and hard work got him to where he is today, it’s clear that the dreams of an 11-year-old boy in 1972 set the course.