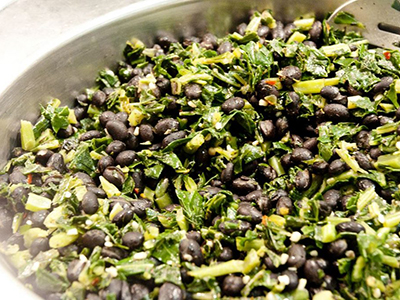 Food Services has added many dishes for vegan palates.

“Before coming to Syracuse my biggest concern was if there would be options for me to eat,” says ElSawi. “My family and I were worried that there would not be vegan food on or around campus. I did my research, and found that being vegan on campus would be manageable.”

This year, there are more options than ever when it comes to a meatless diet on campus. Largely it comes with the addition of more fresh fruits and vegetables. But that’s only the start.

It’s getting noticed, and not only by students. Recently the group People for the Ethical Treatment of Animals (PETA) gave SUFS an A+ rating for its vegan offerings. The group uses a “Vegan Report Card” consisting of 10 criteria when grading schools to determine their rating. This includes: offering at least one vegan entrée at every meal, labeling vegan entrees, partnering with students to distribute vegan food and participating in Meatless Mondays.

“We strive to meet the requests of our students,” says Jamie Cyr, director of Auxiliary Services. “While any positive outside recognition is appreciated, our true test comes each and every day at the dining halls when our students have choices they’re comfortable with and that satisfy their palate.”

Dining centers offer food samplings on Monday nights at alternating dining centers. On Monday, Feb. 13, Sadler dining is going to have a vegan food sampling night. It’s a chance to sample some of the same foods that helped bring students like ElSawi to Syracuse.

“Not only is there a plethora of vegan food in each dining hall, but the options go above and beyond everyday vegan options,” says ElSawi. “Syracuse University has exceeded my expectations and needs as a vegan-friendly campus.”