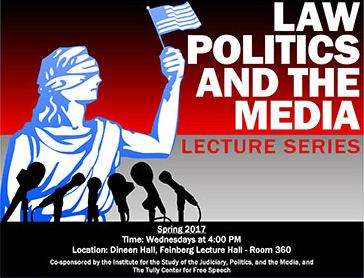 The annual Law, Politics and the Media Lecture Series begins Wednesday, Feb. 8, with guest lecturer Dahlia Lithwick, Supreme Court correspondent and host of the “Amicus” podcast for Slate.com. The series will also feature seven other distinguished lecturers, including Chief Judge Robert A. Katzmann, U.S. Court of Appeals for the Second Circuit. In the College of Law, the speaker series is coordinated by Keith J. Bybee, the Paul E. and Hon. Joanne F. Alper ’72 Judiciary Studies Professor.

Each lecture begins at 4 p.m. in Feinberg Lecture Hall (Room 360) in Dineen Hall.

Dahlia Lithwick, Supreme Court correspondent and host of the “Amicus” podcast on Slate.com

“Victim Mentality: How Media Portrayals of Crime Victims Contribute to Distortions That Affect Public Opinion and Policies on Crime and Punishment”

“Open Access to Law: Why It Matters to More People Than You Think”

“With Pen and Gavel: How Reporters Fight for Access”

“Interpreting the Laws of Congress: A View From the Federal Bench”

Chief Judge Robert A. Katzmann, U.S. Court of Appeals for the Second Circuit

“Polarizing Partisanship in the Media”