The Science of Shipwrecks 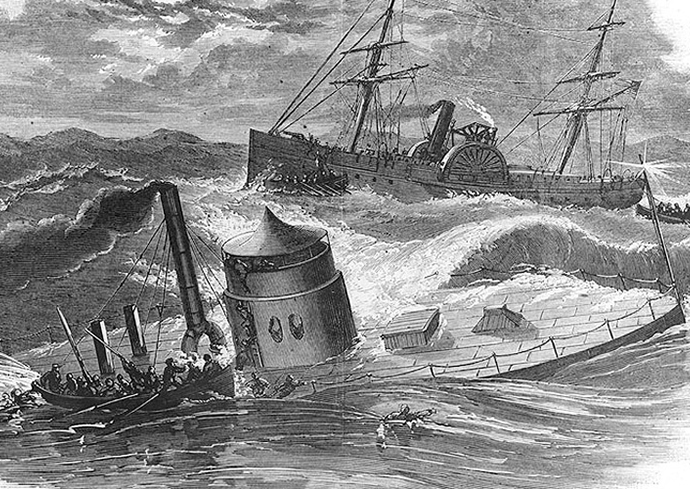 The Sinking of the USS Monitor

On New Year’s Eve in 1862, the USS Monitor sank in a violent storm at Cape Hatteras, off North Carolina’s windswept coast. Sixteen of her 62 sailors perished. One survivor, a surgeon named Grenville Weeks, lost three fingers and the permanent use of his right arm, after being wedged between two rescue boats. “We watched from the deck of the Rhode Island [Monitor’s supply ship] the lonely light upon the Monitor’s turret,” he recalled in an essay in The Atlantic Monthly. “A hundred times we thought it had gone forever, a hundred times it reappeared—till, at last, it sank, and we saw it no more.”

The sinking of the Monitor—arguably the most famous ship in American history—is one highlight of “The Science of Shipwrecks,” a Renée Crown University Honors Program course taught by Cathryn Newton, professor of interdisciplinary sciences and a member of the Earth sciences faculty in the College of Arts and Sciences. Newton traces her connection to the Monitor to 1973, when, as a 16-year-old Duke sophomore, she was one of 15 scientists led by her father—Duke’s renowned oceanographer John G. Newton—who discovered the Civil War ironclad in the deep, icy waters of the Outer Banks, known as the Graveyard of the Atlantic. 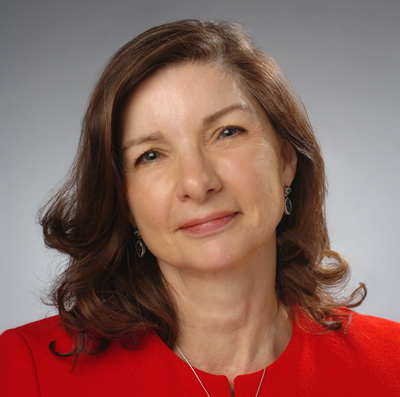 The discovery sparked a lifelong interest in marine science and culture, and served as the inspiration for her Honors course, which examines history’s most fascinating wrecks, from antiquity to the 21st century, through an interdisciplinary lens. “A shipwreck can be understood as a large fossil that sinks to the bottom of the sea, much as a deceased whale becomes part of the fossil record,” Newton says. “Our course uses coastal processes and marine technology to better understand cultural history.”

A special advisor to the Chancellor and Provost for faculty engagement and dean emerita of the College of Arts and Sciences, Newton requires students to examine at least two maritime tragedies in detail. She also takes them to the Woods Hole Oceanographic Institution at Cape Cod, Massachusetts, where they have a hands-on research experience at sea. “Standing on the deck of a ship makes you think differently,” Newton says. “For a weekend, students experience the ocean as an oceanographer does. They’re never the same afterward.”

Stanislav Nedzelskyi ’17 describes shipwrecks as “footprints in the sands of time” that provide a glimpse into the past. “Dr. Newton is a sage, a warden of knowledge,” says the architecture major, whose class project involved a private fishing vessel called the Andrea Gail. Its mysterious disappearance near Nova Scotia in 1991 inspired the book “The Perfect Storm” and its film adaptation. “Every day with her is like a page from an illuminated manuscript.”

‘A genius with data’
Newton attributes the success of the course, launched in 2010, to strategic partnerships with Woods Hole and the National Oceanic and Atmospheric Administration (NOAA), the vision and generosity of the Crown family, and the breadth and depth of her students. She also says there is no shortage of material, with approximately 3 million wrecks—some thousands of years old—scattered across the ocean floor. In fact, Newton has created a searchable database of 2,000 ships that have sunk off the North Carolina coast since the 1500s. Orrin Pilkey, the James B. Duke Professor Emeritus of Geology at Duke, considers her a “genius” with data. “Cathryn uses shipwrecks to teach us about the past, about humanity,” he says. “She also shows how they affect biological and geological processes, by attracting invasive species to an area. This kind of interdisciplinary scholarship is her forte.”

The leading American expert on beachfront erosion, Pilkey was part of the Monitor discovery team, and has witnessed firsthand Newton’s career trajectory. “I was her geology professor at Duke, and, even then, she was extraordinarily gifted among students,” he continues. “Her love of the sea comes through in her teaching, writing and research. Whether she is talking about sunken U-boats off the North Atlantic coast or babies being born on lifeboats, Cathryn brings maritime history to life. She personalizes it for us.”

Indeed, Newton’s course is highly interdisciplinary, combining scientific fundamentals with the humanistic social sciences—chiefly, paleontology, archaeology and anthropology. The result is an academic tour de force that culminates with Woods Hole. Working aboard an offshore research vessel, students spend a weekend collecting water samples, recovering underwater gliders and testing and deploying new instruments. They also learn about various ocean sampling techniques. “There’s only so much you can do with a lecture or seminar,” observes Newton, whose research spans modern and ancient seas, including deep coral reefs. “Whether it’s a calm, warm afternoon in October or a blustery winter day out of the North Atlantic playbook, our students literally get their feet wet.” 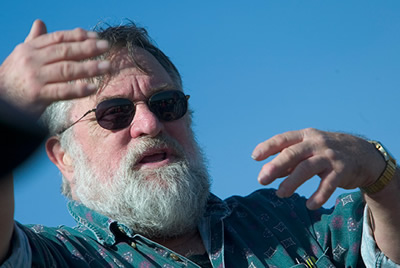 Brandon Mixson ’17, a dual major in psychology and writing and rhetoric, recalls how nonstop rain beset his Woods Hole expedition. “I truly believe that, for a different teacher, such a predicament would’ve spelled doom,” says Mixson, whose final research project dealt with the “Black Swan,” a Colonial period site in the Atlantic Ocean. “Instead, Dr. Newton worked up her usual magic, and I had the best time of my life.”

Mixson says the goal of Woods Hole—and the course, in general—was to examine the delicate balance between humans and the environment. “I learned more from Dr. Newton that semester than from any other teacher since the 10th grade,” he says, praising her integrity and tireless work ethic. “At the risk of sounding hyperbolic, she pushed me to new heights. Somewhere along the way, while teaching us about shipwrecks and ocean processes, Dr. Newton instilled in me a drive to become the best I can be, academically. I learned a lot about the world and myself.”

Cynthia Harris ’18, a biology major with a penchant for environmental science, also treasured her Woods Hole experience. An aspiring marine biologist, she soaked up the area’s many coastal landforms, from gently sloping beaches to high cliffs.

Just as these landforms reflect a combination of natural processes, they also point to the hazards of sea travel. Currents, weather, technology and human error can damage the environment, often resulting in maritime disasters. However, recent advances in weather forecasting, ship-to-shore communication and oceanic mapping are changing the way scientists interact with the world’s oceans.

“I have always wanted to visit Woods Hole,” says Harris, whose research project focused on the Ayrfield, a 100-year-old decommissioned ship in Sydney, Australia, that has turned into a “floating reef,” adorned with foliage. “While we were there, Dr. Newton took us to different coastal sites, where we observed and discussed the effects of coastal development on these complex environmental systems.”

Kate Hanson, deputy director of the Honors Program, considers the course a model of interdisciplinary pedagogy. “Students engage in substantive scientific inquiry and then apply this knowledge through hands-on field research. The personal nature of this course, in which students participate actively rather than observing passively, is a touchstone of the Honors experience,” she says. 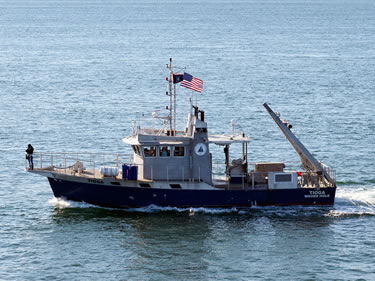 Samuel Gorovitz, professor of philosophy and former dean of A&S, agrees, and is not surprised that the course often fills to capacity moments after registration opens. “No wonder; it’s a life-changing experience for her students,” says Gorovitz, who was founding director of the RSC Honors Program. “Cathryn Newton brings them an unsurpassed combination of inspiration, kindness, rigor, creativity and enduring commitment. Her support for them has no expiration date; many rely on it years after the course.”

Case in point: Harris recently traveled with Newton to Mallows Bay on the Potomac River, an area teeming with hundreds of historic shipwrecks that Newton is helping turn into a national marine sanctuary. “It was incredible experience,” Harris says. “What’s even more incredible is that Dr. Newton has asked me to help with her project. I’m very excited to work with her.”

‘I envy her students’
Teaching, mentoring and collaborating come naturally to Newton. While working with her father, who oversaw Duke’s marine laboratory in the 1960s and ’70s, she rubbed elbows with some of the biggest names in the field. Among them was Harold “Doc” Edgerton, an MIT professor who invented the side-scan sonar, a type of underwater imaging system that helped confirm the identity of the Monitor and, in the process, launched the field of underwater archaeology.

Edgerton’s technology also accelerated the development of Newton’s database, culled from some 5,000 handwritten notecards that she, her father and the rest of the Monitor team accumulated over the years. Debuted in 2009, the project is the basis for Newton’s forthcoming book about oceans and shipwrecks. “I’ve read an early draft of it, and it’s fabulous,” Pilkey says.

Deborah Douglas, curator of science and technology at the MIT Museum, considers Newton’s work an extension of Edgerton’s legacy. “He was so passionate about science, exploration and discovery that just being around him made people fall in love with science. Cathryn Newton was one of them,” she says. “I don’t think I’ll ever tire of hearing her tell stories about being on the Monitor discovery team. That expedition changed her life, unleashing a four-decades-long passion for shipwrecks. That passion is evident every time she comes to the museum for research, as is her enthusiasm for teaching. I envy her students.” 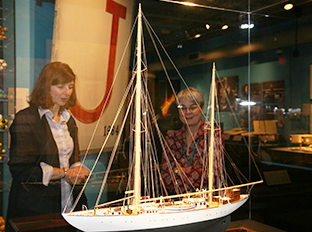 Newton and Deborah Douglas admire a model of the R/V Atlantis at the MIT Museum.

Newton emphasizes a debt to her father, who later founded and led the Monitor Research and Recovery Foundation until his sudden death in 1984. Under his tutelage, she learned the value of gathering scientists and students from different backgrounds and of gaining assistance from state and federal agencies, such as NOAA. The result has been an exquisite body of work, earning Newton the respect and admiration of her faculty and peers. Recently, in the space of four months, NOAA, the U.S. Navy, the North Carolina Maritime Museums in Beaufort and the Greenpoint Monitor Museum in Brooklyn recognized her with a trifecta of events. Newton also has been involved with the design and construction of a 600-mile trail from North Carolina to New York, featuring sites important to the Monitor’s history.

“Because shipwrecks are often accidental, they show the past as it really was—a snapshot in time,” she says. “I am just grateful to teach this course, which reframes my scholarly work and writing. I see it as a crucible from which new things develop, and students from all walks of life learn from one another.”