The Life Path Of A Visionary: Christopher Gentile ’81

It may not be the final frontier, but with modern virtual reality technology, we can certainly “explore strange new worlds” and “boldly go where no man has gone before.” Today’s virtual reality can trick our minds into believing that we have been transported to places from our wildest imagination without ever leaving the comfort of our homes. Headsets like the Oculus Rift and the development of haptic feedback accessories like the Teslasuit will allow us to interact with, and even feel, virtual environments. These immersive experiences may be more convincing than ever before, but the idea of home virtual reality is far from new. Just ask Christopher Gentile ’81. 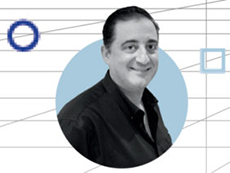 Inspired by the technology on display in the 1960s Star Trek, Gentile developed a passion early in his life to help engineer futuristic solutions and products. In 1989, Gentile gained notoriety as an inventor of the first true virtual reality device that you could receive as a birthday present—the infamous Nintendo PowerGlove. For children of the ’80s and ’90s, the PowerGlove needs no introduction. Unveiled in the cult classic movie (and glorified Nintendo commercial) “The Wizard,” it hit the market when Nintendo’s original 8-bit entertainment system was at the height of its popularity.

The device was a virtual reality controller worn on your right hand that allowed players to interact with two-dimensional games three-dimensionally. While the PowerGlove ultimately fizzled as a gaming device after just a year, it became a cultural phenomenon that lives on to this day as a nostalgia item adored by collectors and tinkerers alike. It has been reprogrammed by enthusiasts to play invisible turntables, even animate.

While the PowerGlove may have been Gentile’s biggest claim to fame, he also worked on other virtual reality gaming systems in the early ’90s that made use of the technology of the time, including low-tech VHS tapes. He invented and launched the first PC hand recognition device, called the Essential Reality’s P5 Glove. He even designed a virtual reality-based theme park ride that still operates at Disney World called Ride the Comix. He says, “It’s interesting to see VR gaming going the way it has. I see companies struggling with some of the same issues that we did back then, like motion sickness. In some cases, our work surpasses some of the newer tech.”

But it’s not just VR. Gentile is a serial inventor and entrepreneur who is difficult to categorize. Since he graduated from the College of Engineering and Computer Science, he’s worked as a nuclear engineer; served as the CTO for an entertainment company where he developed holograms for the appropriately named Visionaries action figure line; and started his own company, MC Squared, where he’s developed web solutions for companies like MTV Networks, Target, Best Buy, Ameriprise and many others. A common theme in his life and in his work is that he has been ahead of his time. In addition to tackling VR in the ’80s and ’90s, he was passionate about solar power in 1981 and set up MC Squared as a remote virtual workplace at a time when it was unheard of.

With so many varied accomplishments throughout the years, it is a wonder that he is even able to recall everything, but when it comes to remembering things, Gentile—of course—has another novel solution. In recent years, Gentile has developed the LifePath iBoard®. Available on smartphones, tablets and the web, LifePath, gives users the ability to record, organize and share the most significant moments and events in their lives. LifePath events and albums can be populated with photos, videos, files and descriptions of milestones. They can be privately or publicly shared, even coauthored, with family members or coworkers to securely record family and company histories.

To create your own LifePath iBoard, visit www.lifepathiboard.com and use the promo code “SU2017” when you sign up to receive an additional 250MB of storage on top of the 250MB of free storage that comes with a new account.

Gentile’s string of self-started successes was achieved with an engineering education that did not include much of the entrepreneurial focus that exists in SU’s curriculum today. So what’s his secret? What approach has he taken to accomplish so much? His advice to all engineers is to expand your horizons and collaborate.

“When I was at Syracuse, I petitioned to take all of my electives in art and music. It taught me to work with different-minded people, much like you need to do in industry,” he says. “You need to bring in all the right people to bring a product to market and be willing to share a percentage of the potential revenue. If you have a great idea, and only end up with 10 percent of the revenue, it’s going to be worth so much more than holding onto something that never sees the light of day. That’s why it’s important to work with people from other disciplines when you’re in college. Syracuse is one of the best schools to do that because it’s so strong in so many disciplines.”

It is that same collaborative and innovative spirit that has led Gentile to return to an area he pioneered decades ago—the universe of virtual reality. Coming soon, he will roll out his newest venture—MindTrip. Through a combination of art, engineering and technology he will help people “experience the impossible” through immersive VR and check things off their “virtual bucket list” such as visiting the pyramids, jumping out of a plane or deep sea diving.

Who knows, perhaps Gentile’s VR experience will be the first to put us on the bridge of the Starship Enterprise like he imagined all those years ago. As he puts it, “Soon, there will be no limit to what we can experience.”