Researchers in the College of Arts and Sciences are closer to understanding how the loss of glaciers in the Cordillera Blanca of Peru is affecting water resources in a region responding to global climate change. 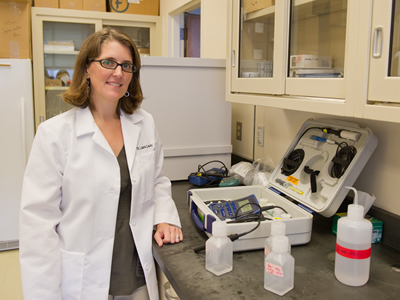 Laura Lautz G’05, associate professor of Earth sciences, is part of a multinational, interdisciplinary research team doing fieldwork in the northern Peruvian Andes. She and other researchers from A&S have been studying the groundwater hydrology of proglacial valleys—areas formed by glacier recession—in the ice-capped mountains, home to the world’s highest density of tropical glaciers.

Their findings are part of a major article in Hydrological Processes (John Wiley & Sons, 2016), co-authored by scientists and engineers from McGill University and École de Technologie Supérieur, both in Montreal; The Ohio State University (OSU); and the French Research Institute for Development in Marseille.

“Tropical glaciers in the Andes are retreating at an alarming rate,” Lautz says. “Meltwater from these glaciers is important because it sustains stream-flow during the driest months of the year. As glaciers retreat and disappear, so does the amount of meltwater. Therefore, groundwater stored in the alpine valleys of the Cordillera Blanca may become increasingly important to downstream areas.”

The Andes contain 99 percent of the world’s tropical glaciers—slow-moving rivers of ice whose high elevations are virtually unaffected by balmy tropical temperatures. Such glaciers, however, are vulnerable to climate change. One study posits that, since the 1970s, Peruvian glaciers have lost nearly half of their surface area.

Given the density of glaciers in the Cordillera Blanca, communities downstream rely on groundwater discharge and glacier meltwater for their water supply during the dry winter months (i.e., May-September). Runoff from proglacial streams also supports small-farm and commercial agriculture, hydroelectric power generation and transnational mining operations.

“Because of the region’s remoteness and difficult access, there are few field studies that have effectively identified the spatial distribution of groundwater discharge,” Lautz says. “We’re changing that.”

Whereas meltwater comes from the melting of ice and snow, groundwater is the result of precipitation that soaks into the Earth’s surface; is transported underground and then returns to lakes, marshes and streams.

Lautz estimates that approximately half the discharge in the Cordillera Blanca’s proglacial streams comes from groundwater.

What is not understood—and is the thrust of her research—is the spatial distribution of the groundwater discharge. Using a model called HFLUX, Lautz and her team, including postdoctoral research associate Ryan Gordon G’13, Earth scientist AnneMarie Glose G’13 and Ph.D. candidate Robin Glas G’18, have created an energy balance model of a stretch of river in Peru’s Huascaran National Park.

“We’ve incorporated stream temperature observations, meteorological measurements and time-lapse, ground-based infrared imagery,” says Lautz, who has built a career on studying how hydrologic processes affect water quality and movement through watersheds. “This information has enabled us to determine gross and net groundwater inputs to a reach of the Quilcay River, originating in the Cordillera Blanca.”Lautz’s team found that 29 percent of the stream discharge at the reach outlet came from groundwater. Moreover, dye tracing revealed that 49 percent of the stream water exchanged with subsurface water. 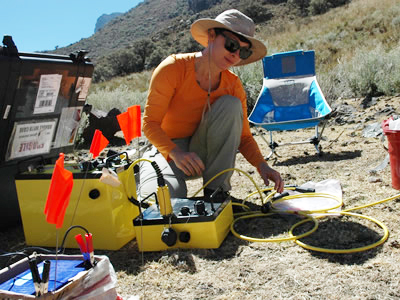 Robin Glas G’18 in the field

Annual trips to the Cordillera Blanca are standard for Lautz’s research group. Because of the high altitude (upwards of 13,000 feet) and lack of oxygen, she and her team travel lightly—mostly by foot and pack-animal—and work for a week at a time.

Lautz marvels at the number of people, many of whom are alumni, involved with her projects. Recently, she, Glas and Ph.D. student Emily Baker G’18 conducted a seismic tomographic survey of part of the Cordillera Blanca, using equipment belonging to Assistant Professor Robert Moucha. They were assisted by Marty Briggs G’12, a research hydrologist at the U.S. Geological Survey; Jeff McKenzie G’00, G’05, associate professor of Earth and planetary sciences at McGill; and Bryan Mark G’01, professor of geography at OSU, where he also works in the Byrd Polar and Climate Research Center.

“It takes a village to pull off these projects,” Lautz says. “Students and alumni are vital to our success, on campus and in the field.”