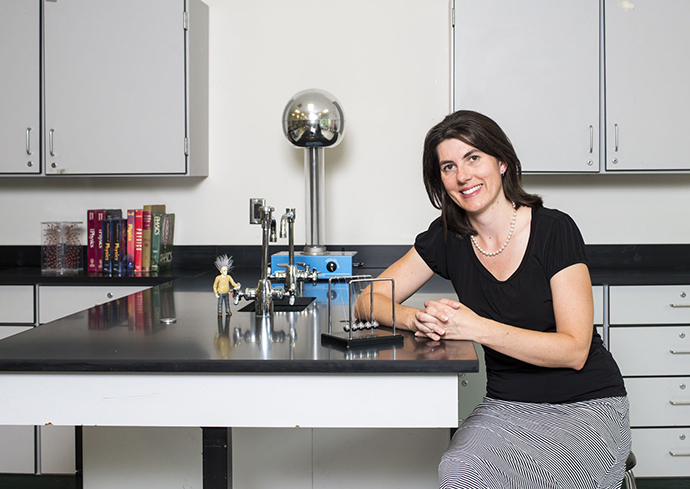 Kristen Angello left a career in engineering to teach physics in the LaFayette, N.Y., school district.

Growing up on Long Island Sound, Kristin Angello ’99 was frequently disappointed by these words. Every summer, sewage and toxic runoff from city streets transformed her summer hangout into a polluted mess. Fortunately, the very same mess that inevitably left her crestfallen every summer break motivated her to pursue environmental engineering—intent on developing solutions to address water pollution.

And she did. Angello’s first job after graduating from the College of Engineering and Computer Science was working for ARCADIS as a senior civil engineer. She oversaw major projects involving sustainable management of storm water and was part of a research team that designed one of the largest ultraviolet disinfectant systems in the world at the Metropolitan Syracuse Wastewater Treatment Plant on the shores of Onondaga Lake.

Along the way, Angello also gave back to her community. She became involved with the Society of Women Engineers, serving as their outreach coordinator. In this role, she designed engineering activities and workshops for organizations like the Girl Scouts and Girls Inc. She also jumped at a chance to lead an engineering science enrichment cluster in her kids’ classes. It was here that a new passion began to take hold—teaching.

“I began to see kids building on their skills and getting extremely excited about the things I was sharing with them. We did an acids and bases activity, making a pH indicator with cabbage juice. It stunk up my house terribly,” says Angello, “One day, one of the boys from the class approached me outside of school and was absolutely breathless telling me about doing the experiment again at his home. He was so excited! I was passionate about my career as an engineer, but I began to realize I could help kids get sparked about science and engineering, so I decided to give it a shot.”

In a bold move, Angello departed an established and promising job as an engineer to do her part to inspire budding engineers and scientists as a science teacher in the LaFayette Central School District in LaFayette, N.Y.

Angello teaches physics and Project Lead the Way—a nationally recognized engineering curriculum that focuses on problem solving, the engineering design process, and creativity in math and science. The material learned in high school science courses has a place in engineering, no doubt, but very few people are actually taught engineering in high school. Through Angello’s work, students are doing just that.

“When I was in high school I thought engineering was all about gears and grease. It took one of my favorite high school teachers to show me that engineering could be anything. I hope I’m inspiring the same kind of interest in others that he did in me,” she says. “I teach engineering concepts in all of my classes that get my students to think as an engineer—how to problem-solve, how to try something, see it fail and be OK with that. It’s a whole mindset.”

And these aren’t your father’s science classes. Physics and engineering have never been quite this much fun. Newton’s three laws are taught by building balloon cars. Inertia is taught with an exploration of how astronauts move through the space station. Crashing LEGO cars (complete with mini figure crash dummies) helps convey momentum. Gravity and force are learned while sledding down the snowy hills behind the school. Designing miniature rollercoasters and taking a field trip to the amusement park teach energy and motion. With each project, she encourages her students to engineer the best solution.

In her classes, she also makes a point of indicating which careers are related to each topic. For example, they discuss the police division of accident scene investigators and how they need to be knowledgeable about friction, momentum and forces. When working through a unit on waves, the students complete a project that explores different applications of the Doppler effect and what types of careers rely on the concept, such as medical technicians, meteorologists, law enforcement and biologists.

Angello’s work isn’t just inspiring—it’s vital. According to the U.S. Department of Education, just 16 percent of qualified high school seniors are interested in pursuing a career in STEM. In New York State, students are only required to take three years of science. Many reach this requirement before ever needing to take physics. For most, Angello’s course is optional. She says, “In most cases, if you are aiming for an engineering degree, you will be sunk without physics. Without it, students are at an extreme disadvantage.”

It’s not just the current structure of high school science education that can discourage students from entering the STEM field. Lots of students lose interest in sciences before they even reach high school—especially girls. Somehow there is a disconnect between the importance of STEM in society and an ability to inspire a significant enough number of kids to pursue STEM disciplines.

The Atlantic once featured an article titled, “Too Many Kids Quit Science Because They Don’t Think They’re Smart.” Angello says she’s seen this mentality before in peers and students alike. “It drives me crazy when people say they could never be an engineer. You don’t know that. You have to try. People need time and patience to learn. I structure my class so I’m not leaving anyone behind. I think lots of people feel like engineering is difficult because they didn’t pick up on it quickly.” said Angello. “There is still this image of an uncaring, inaccessible professor at the chalkboard just writing with one hand and erasing with the other. That’s not how it’s done anymore. Yes, this is complicated stuff, but if you are patient with yourself you are going to be able to figure it out.”

In spite of what she’s up against, Angello can’t help but be encouraged by the STEM programs that are gaining momentum around the country. In addition to Project Lead the Way, Angello founded a Science Olympiad team at her school and is thankful for an abundance of opportunities like “Geek Girl” camps to enroll her own children in extracurricular STEM programs. She even sees kids’ interest in building games like Minecraft as a positive sign.

Plus, her students show excitement for the subject matter every day. “My students are always amazed to learn what engineers are capable of, and it is my hope that they begin to think, “I could do that, too!”

While she understands that not all of her students are going to become engineers, she’s confident that she can inspire them to look at the world around them with wonder and consider how things are happening and explore it from a scientific mindset. She believes that just as she was once inspired to clean up the water at the beaches in her hometown, students can find a reason to take their interest in STEM to another level in their education and future professions.

“I’ve made it my mission to teach my students that whatever it is they love, whatever they are passionate about, they can engage and improve it with a stronger understanding of science and engineering. In fact, the world needs them to.”