Solar technology—capturing the power of the sun to produce electricity—has been around in some form since the 19th century. There is currently 31.6 gigawatts (GW) of total installed solar capacity in the United States, enough to power 6.2 million American homes. With a nationwide movement toward developing clean energy, vast potential exists in the field. 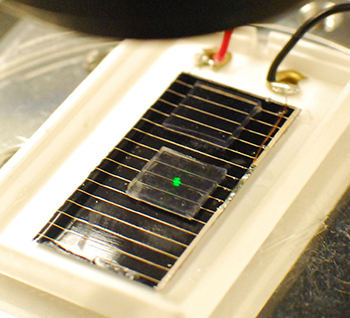 A beam of light is directed toward a solar cell covered with a newly developed plastic coating that enables increased light capture.

A new technology, developed by College of Engineering and Computer Science Assistant Professor Ian Hosein, promises to increase the efficiency of solar cells by 5 percent. That can provide enough energy to power another 55,000 homes (the city of Syracuse has just over 64,000 housing units).

The new technology, developed by Hosein and graduate students Fu-hao Chen, Shreyas Pathreeker and Jaspreet Kaur, was the subject of a paper recently published in the journal Optics Express.

Solar cells work by capturing the light from the sun. Standard solar cells have metal fingers or grids—also called top contacts—that connect the active material to the rest of the cell. These contacts are made of metal and very reflective. The contacts cover a certain portion of the active surface of the solar cell, and light that would otherwise hit the solar cell hits the contact and is back reflected or scattered. This is called shading loss or reflective loss, and accounts for an 8 to 10 percent loss in the total amount of energy collected.

“When we are talking about 30 gigawatts, collecting some of that back is significant,” Hosein says. “We are looking at how we can redirect light so it is not scattered off these reflective fingers and lost.”

Most solar cells are coated with clear plastics to protect them from the weather. Currently, most cells are processed with a uniform coating. Hosein and Chen developed a new resin that contains triangular prisms. These prisms, made out of air, overlay the contacts and reflect light back into the cell.

Hosein illustrates how the resin works with a simple principle of physics—total internal reflection. “If you are in water and try to shine a light upwards, it is going to refract and bend. But if you shine it at a sufficiently glancing angle relative to the surface, at some point light will be totally internally reflected. You have a very efficient mirror.” Hosein’s team engineered air prisms embedded into a plastic coating to create the same effect. They now reflect light, which would otherwise hit the contact and be lost, perfectly and seamlessly, toward the solar cell.

This mirror effect works for a range of angles, not just one, Hosein says. “When the sun travels across the sky, morning to night, winter to summer, it will have different angles relative to a solar cell’s surface. We show in our work that we can widen the solar cell’s collection range. The percentage of light collected over the span of a day, or the span of a year, is more than if this prism structure wasn’t there.”

Kaur developed a prototype resin to test its performance over a wide range of angles. And while previous studies often use glass to produce coatings, Hosein and his team use a silicone resin—it’s cheaper and more malleable. Chen and Pathreeker performed the solar cell measurements. They experimentally confirmed that a 5 percent gain could be achieved over similar solar cells on the market.

The team members also found that just not any prism will work. They simulated light propagation in solar cells covered with resins that had air prisms of different shapes, and found that certain ones can lead to losses. From these simulations, Hosein and his team now have a set of design principles for fabricating coatings that ensure maximal light capture.

The experiments were done on very simple solar cell architectures. “So we expect now if we incorporate the resin on the most state-of-the-art cell, we can possibly see even greater gains,” Hosein says.

The challenge for Hosein and his students now is to move the technology they have developed to a larger scale. “We showed that we can do this on a one-centimeter-by-one-centimeter area. But solar cell modules are much larger. How do we actually create that?” he asks. They will explore the potential of 3-D printing their coatings.

Solar energy installations are only expected to grow, as clean energy alternatives are sought. The U.S. installed 2,051 megawatts (MW) of solar PV in the second quarter of 2016. With more than 1.1 million residential solar installations nationwide and a contracted utility-scale pipeline over 20 GW, the industry is on pace to nearly double in size in 2016.

“The fact that we can show a 5 percent increase shows that solar capacity is higher than what currently exists,” Hosein says. “This makes the incorporation of more solar power into the current energy grid plausible.”

The United States is home to places—such as Florida, California and Arizona—where the sun is the most intense and longest lasting. And New York, while not the sunniest spot in the country, has enough sunlight to provide a significant amount of solar power. It is also home to a bustling solar cell installation market.

“There is a huge opportunity,” Hosein says. “We are working to make solar cells maximize the capture of that light.

The National Science Foundation’s (NSF’s) 2020 Mathematical and Physical Sciences Directorate (MPS) bi-annual brochure highlighted research by Tomasz Skwarnicki, professor of physics in the College of Arts and Sciences (A&S), and a team of his collaborators. The brochure featured the…

Physicists from the College of Arts and Sciences’ (A&S’) Gravitational-Wave Group are at the leading edge of exploring the universe with gravitational waves. From designing and building gravitational-wave observatories to studying the science of current detections from the Laser Interferometer…

Electrical engineering and computer science professor Kevin Du wanted to up the production value of the cybersecurity instruction videos he has been posting to YouTube and decided to construct a studio inside his lab space. “I used to have one…

Loredana Lanzani, professor of mathematics in the College of Arts and Sciences, has been named a Fellow of the American Mathematical Society (AMS). Lanzani is one of 45 mathematical scientists from around the world to receive the honor this year,…