The Communications Sciences and Disorders department is host to a new research lab, led by Assistant Professor Ellyn Riley. Work will focus on the language disorder aphasia, which is most often caused by stroke. Riley and lab members will investigate how personal factors influence aphasia recovery. 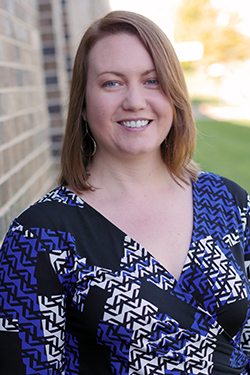 “Dr. Riley has done an excellent job developing the aphasia lab, which brings a new area of research to our department, and fits in well with the neuroscience integrated learning major program at SU,” says department chair Karen Doherty.

Aphasia is a common language disorder that, in addition to stroke, can be caused by other attacks on the brain’s language centers, such as traumatic brain injury, infection, brain tumor or neurodegenerative diseases. The condition causes sufferers to have difficulty expressing and understanding language. Diagnosis by a speech-language pathologist or neurologist involves brain imaging and speech and language tests. Speech therapy is the primary treatment, but Riley will be investigating additional, supportive modalities to aid recovery.

Riley’s interest in aphasia was sparked when her grandmother experienced a stroke, leading to aphasia, “She recovered quite well, but I remember the difficulty she experienced with communication, which was particularly frustrating for her as a former writer,” Riley says.

In her 11 years of research in the aphasia field, Riley has worked on linguistic complexity theory, specifically a model called “Complexity Account of Treatment Efficacy” (CATE). The model turned current speech therapy strategy on its head, suggesting language therapy first focus on producing more difficult sentences, words, or speech sounds. “Because of the way we think language is organized in the brain, when you learn to produce more difficult language structures, your brain is able to make connections to related structures without having to build each piece separately. The net result of this is more efficient learning—clients are able to learn simpler structures without additional training.” Riley says. Riley’s previous research expanded CATE from speaking to reading when she successfully developed a new “complex first” treatment for acquired alexia, a reading disorder that can develop following stroke.

Current work in the Riley lab, which includes four undergraduate and four master’s students, focuses on identifying influences of patients’ personal factors on aphasia recovery. “Most aphasia treatment research focuses on figuring out what to do differently within the therapy session to make treatment more effective. However, relatively little is known about how other factors can influence an individual’s recovery or how they might predict outcomes of treatment,” Riley says.

Riley hopes that her new lab will inspire more students in the department to pursue research careers. “Dr. Riley has made an impressive effort to include many undergraduate and graduate students in her lab, which has been a terrific experience for the students,” Doherty says.

Riley adds, “I encourage my students to be involved in all aspects of the research process and think about our research as a piece of a larger puzzle. Many students in our field seem to think research is only for Ph.D.s, but I want them to realize that research doesn’t have to be inaccessible.”