Meet and Greet with Courtney Young, former President of the American Library Association

The Syracuse University Libraries and the School of Information Studies (iSchool) will host a “meet and greet” with Courtney Young, former president of the American Library Association, on Monday, Oct. 3, from 3:30- 5 p.m. in Bird Library’s Peter Graham Scholarly Commons. Brief remarks will be given by iSchool Dean Liz Liddy, Libraries’ Associate Dean Lisa Moeckel and Young. 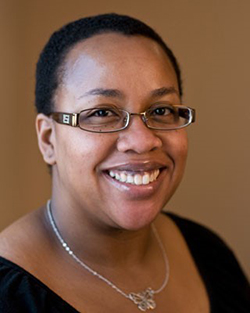 Young served as the president of the American Library Association for 2014–2015 and ended her term as past president in June 2016. During her presidency, Young focused on diversity, career development and community engagement and outreach. She was named a Library Journal Mover & Shaker-Change Agent in 2011 for her work in highlighting issues of diversity in libraries and academia.

Young is currently head librarian and professor of women’s studies at the Greater Allegheny campus of Pennsylvania State University. Among her many roles, she has served as an academic advisor to students, coordinated an honors program, worked to improve universitywide virtual reference services, and evaluated and tracked diversity of the library’s acquisitions. She previously worked at other campuses of Penn State, as well as at Michigan State University and The Ohio State University.