A new study, inspired by water’s movement from roots to leaves in tall trees, shows that a certain kind of passive liquid flow, where liquids naturally move in response to surface atomic interactions instead of being driven by external forces like pumps, is remarkably strong. By virtually modeling the way atoms interact at a solid surface, College of Engineering and Computer Science researchers suggest that passive liquid flow could serve as a highly efficient coolant-delivery mechanism without the need for pumps. The results, published in Langmuir,  also have implications for the development of new nanoscale technology. 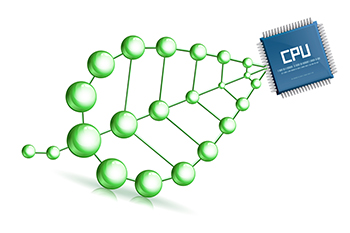 By virtually modeling the way atoms interact at a solid surface, College of Engineering and Computer Science researchers suggest that passive liquid flow could serve as a highly efficient coolant-delivery mechanism without the need for pumps.

“We were surprised at the strength of the passive liquid flow we obtained, which showed that it can used to remove a large amount of heat over a very small surface area,” says Shalabh Maroo, assistant professor of mechanical and aerospace engineering and senior author on the new study.

Surface-driven passive liquid flow is different from the more widely known capillary action. Capillary action, where liquid is seemingly sucked up into very narrow spaces, is primarily governed by vapor-liquid interactions and has been studied extensively. Capillary action can be seen in man-made and natural systems, including water wicking up a piece of fabric or paper.

Alternately, surface-driven flow arises from molecular interactions between a solid surface and the liquid. The current research found that surface-driven flow is much stronger than capillary action. “It presents an opportunity to design technological systems that can benefit from these stronger flows,” Maroo says of the study’s practical applications.

In the current study, Maroo and then-Syracuse Ph.D. student Sumith YD, lead author of the study, computer simulated interacting atoms of liquids and solid surfaces to better understand how passive flow works at an atomic level. (YD is now a post-doc at the University of Georgia.) “These simulations provide valuable insight into the process, and can help us in designing experiments to realize heat removal devices for cooling electronics,” Maroo says.

As electronics have gotten smaller, the problem of cooling next-generation technology has become more difficult, Maroo says. For new devices, like integrated circuit chips, transistors and concentrated photovoltaic devices, heat needs to be dissipated at a greater amount per surface area. For example, a household iron generates roughly 5 watts per squared centimeter of heat. Next-generation devices can create up to 1,000 watts of heat over the same area.

Building off this research, Maroo aims for creation of cooling devices that can dissipate the massive amount of concentrated heat generated by small-scale devices through surface-driven passive flow. Liquid would continually evaporate at the hot surfaces, while simultaneously being continually drawn to the areas requiring cooling by the passive flow mechanism.