A biologist in the College of Arts and Sciences has been awarded a grant to study the link between early-development stress and adult disease. 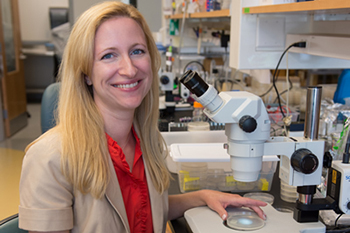 Assistant Professor Sarah Hall is using a $446,000 grant from the National Institutes of Health to investigate how fetal and childhood stress triggers long-term changes in gene activity in neurons. Using a microscopic worm called Caenorhabditis elegans, she and her colleagues will characterize the epigenetic mechanisms that regulate the environmental programming of gene expression, leading to certain behavioral traits.

“Increasing evidence suggests that stressful environments early in life can affect the health and behavior of adults,” says Hall, citing the well-worn example of how stressful conditions in the womb often set the stage for depression and metabolic disorders later in life. “These effects are thought to be caused by changes in the regulation of gene expression in specific tissues. What’s not clear, however, is how a particular stress causes long-term changes in gene activity.”

Enter C. elegans, an animal model system for genetics and development, whose fundamental machinery is similar to that of vertebrates, including humans. Previous studies by Hall have shown that gene expression varies widely between adult worms exposed to stress and identical worms that have not. Hall and her team want to know what accounts for these changes.

Part of the answer may be found in RNA interference (RNAi), a process by which cells use RNA molecules to regulate gene activity. Hall’s lab investigates how RNAi regulates genes as a result of stress. Their work centers on a protein called OSM-9, required for a variety of regulatory behaviors in C. elegans and similar to many proteins in humans with the same function.

“OSM-9 activates neurons when they detect a specific environmental stimulus,” says Hall, who also is on the faculty of the Interdisciplinary Neuroscience Program and the Forensic and National Security Sciences Institute. “It’s required for attractive and repulsive behaviors and, for worms, to detect being touched.”

Hall explains that adult worms retain a cellular memory of their environmental history, which is reflected in changes in gene expression, genome-wide chromatin state, behaviors and life-history traits.

“We also know that OSM-9 is down-regulated specifically in animals that experience early-life stress, thus correlating with altered sensory behaviors,” she adds. 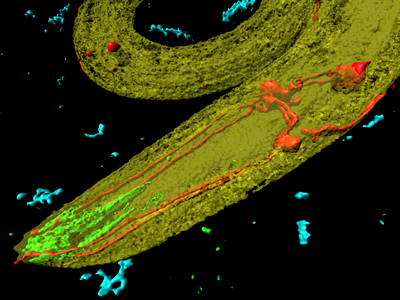 “Our experiments will test whether or not altered behaviors due to down-regulation of OSM-9 promote outcrossing [i.e., breeding] among animals with environmental stress, leading to greater genetic diversity within their population,” Hall says. “We also are working to identify additional genes expressed in neurons that are regulated by developmental programming similar to OSM-9.”

Given the similarity of gene regulatory pathways across the species, Hall hopes that her work will inform related investigations into higher organisms, including humans.

“Mechanisms that regulate the establishment and maintenance of gene-expression changes in adulthood due to early-life stress in humans are largely uncharacterized,” she adds. “Our research hopes to change this, leading to a better understanding of the epigenetic programming in the human brain.”