A physicist in the College of Arts and Sciences has been awarded a major grant to continue the search for gravitational waves using the Laser Interferometer Gravitational-Wave Observatory (LIGO). 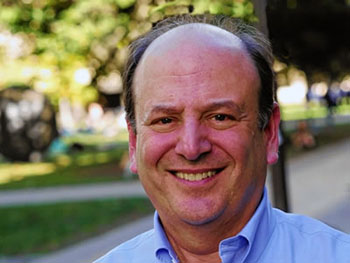 Peter Saulson, the Martin A. Pomerantz ’37 Professor of Physics, is the recipient of a three-year, $750,000 grant award from the National Science Foundation (NSF), enabling him and members of Syracuse University’s Gravitational Wave Group to aid in the search for “ripples in the fabric of spacetime.” He and his colleagues hope to improve the way they recognize brief intervals of time in LIGO data, when observing-run results are of poor quality, or when one of LIGO’s interferometers generates a spurious signal.

“This work will enhance the sensitivity of searches for new signals,” says Saulson, who was instrumental in LIGO’s two historic detections of gravitational waves last fall. “It will increase our confidence in weak signals that are not instrumental artifacts, but, instead, are actual astronomical events.”

Saulson has more than 35 years’ experience with LIGO. An expert at assessing the authenticity of gravitational-wave signals, he was part of the team that carried out the first engineering design of LIGO. Afterward, Saulson wrote “Fundamentals of Interferometric Gravitational Wave Detectors” (World Scientific Publishing, 1994), the field’s first textbook, and served two terms as a spokesperson for the LIGO Scientific Collaboration, a group that he co-founded, consisting of nearly a thousand scientists, engineers and students from 15 countries.

Whereas LIGO’s detections confirm the idea that black holes might form binary pairs, signals from neutron star binaries have not yet been found. “Their signals are so weak that we still haven’t achieved a level of sensitivity [with LIGO] to detect them, but we should be able to find them soon,” says Saulson, who joined Syracuse’s faculty in 1991.

The grant will enable Saulson to develop a technique for distinguishing between genuine black hole binary signals and noise transients mimicking them. In addition to improving existing detection tools, he and his colleagues will build new ones that rely on audio methods to examine data quality in real time. The result will be a library of standard sound files, used for comparison with astronomical events.

“By distinguishing between genuine gravitational-wave signals and instrumental artifacts, LIGO will improve the sensitivity of its searches, thus increasing the believability of its results,” he adds.

Saulson’s project also will foster science education on multiple levels. He looks forward to collaborating with graduate students, undergraduates and postdoctoral fellows, and to finishing his editing of a book on gravitational-wave interferometers. Saulson also will extend a project that he has been doing in consultation with Harry Collins, a noted sociologist of science at Cardiff University (U.K.), about the history of gravitational-wave detection.

“Harry and I look forward to handing off the project to a new scholar,” says Saulson, referring to Daniel Kennefick, an associate professor of physics at the University of Arkansas, known for his contributions to the study of gravitational waves and of the history and sociology of modern physics.

LIGO recently made headlines when its two massive, “L”-shaped detectors—one in Livingston, La., and the other in Hanford, Wash.—picked up faint gravitational wave signals, resulting from two different collisions of black holes. Both detections coincided with the centenary of Einstein’s general theory of relativity, which Saulson considers the “most profound physical explanation” of how gravity works.

He, along with professors Duncan Brown and Stefan Ballmer, oversees one of LIGO’s largest, most diverse research groups. With more than two-dozen professors and students, the group has been instrumental in the success of LIGO and its $200 million upgrade, Advanced LIGO, which debuted last fall.

The LIGO observatories are funded by NSF, and have been designed, built and operated by Caltech and MIT.

In high school, Ellen Jorgensen was highly involved in the Green Club in her school and led initiatives that focused on waste reduction. She also developed education initiatives for her peers to give them a sense of responsibility regarding the…

Around the world, April is a month of celebrating and increasing awareness about climate change and the environment. The Sustainably Management team’s goal this year is to inspire the campus community to learn how they can participate in helping protect…