The National Science Foundation has awarded $160,000 to Matthew Rudolph, assistant professor of physics in the College of Arts and Sciences, to continue his work with the Large Hadron Collider (LHC) at CERN’s accelerator complex near Geneva, Switzerland. 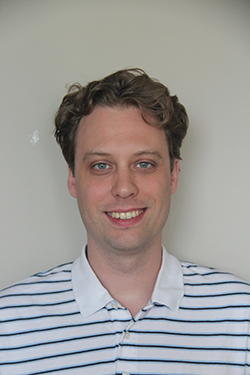 The two-year grant will provide funding to support Rudolph’s work on b quark physics as part of a project titled “Flavor Physics and Upgraded Tracking at LHCb.” Specifically, it will help cover his personal costs and support a new graduate student working on both physics analysis and an upgrade to the LHC’s Upstream Tracker. The upgraded tracker is part of an effort to further enhance the quality of data drawn from the collision of subatomic particles and the decay of the particles emerging from those collisions. It will allow for greater sensitivity and precision measurements of the particles and processes that are produced by the collisions.

One of the key objectives of the LHCb research project is to answer a mystery stretching back to the Big Bang: Why is our universe dominated by matter and not antimatter?

“The experiments at CERN and, in particular, the LHC experiments, are about pushing the absolute limits of our knowledge of physics,” says Rudolph. “The LHC is, literally, a discovery machine. All the experiments are designed to discover completely new physical interactions. By accelerating particles to such high energies and creating as many collisions as possible, we can study conditions that haven’t existed in nature since soon after the Big Bang. LHCb uniquely looks for these new discoveries by making precision measurements and looking for rare decays of particles containing bottom and charm quarks. This award will jump-start my new series of measurements and help ensure that we are able to construct an excellent new tracking detector to improve the LHCb experiment as a whole.”

Quarks are elementary particles that serve as building blocks for matter. Bottom and charm quarks are two of six types of quarks that have been identified as part of particle physics’ “Standard Model,” a well-established, yet incomplete, theory of how the basic building blocks of matter interact. The LHCb experiments seek to answer some of the remaining questions relating to that theory and further expand understanding of subatomic particles and, consequently, the origins of the universe.

Rudolph has been working on LHC experiments at CERN—the European Organization for Nuclear Research—since he was a graduate student at the Massachusetts Institute of Technology, where he also earned his Ph.D. He joined the Syracuse physics faculty in 2015, and his current LHCb research is part of a collaboration with fellow Syracuse physics faculty colleagues Sheldon Stone, Marina Artuso, Tomasz Skwarnicki and Steve Blusk. They are among more than 800 scientists from 16 countries involved in the LHCb experiment at CERN.