A researcher in the College of Arts and Sciences has been awarded grants from The ALS Association and Oak Ridge Associated Universities (ORAU) to support his study of protein biosynthesis. 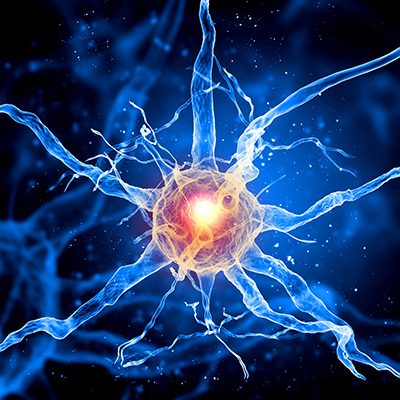 Nerve cells, or neurons, found in the nervous system

Carlos A. Castañeda, assistant professor of biology and chemistry, is the University’s inaugural recipient of a one-year, $50,000 starter grant from the ALS Association, a nonprofit organization that seeks to find a cure for Amyotrophic lateral sclerosis (ALS), also known as Lou Gehrig’s Disease. ALS is a progressive neurodegenerative disease that affects nerve cells in the brain and spinal cord. Castañeda will use the award to investigate the effects of a protein called Ubiliquin-2 (UBQLN2) on ALS.

Castañeda also is the recipient of ORAU’s 2016 Ralph E. Power Junior Faculty Enhancement Award, whose $5,000 prize is being matched by the University. He will use the grant to study Ufm1, a protein that regulates the cellular stress response of the endoplasmic reticulum (ER), and is linked to diabetes, migraine, breast cancer and other diseases. ORAU is a national consortium of more than 100 major institutions, committed to groundbreaking research in science, education, security and health.

“We are extremely proud of Professor Castañeda,” says Ramesh Raina, associate professor and chair of biology. “He is one of the field’s rising stars who is using his talent, curiosity and knowledge to meet future needs in critical areas, including human health. With these awards come prestige and value, both of which reflect favorably upon him and the life sciences at Syracuse.”

UBQLN2 is a protein-encoding gene whose mutations are commonly associated with ALS and dementia. Castañeda says that UBQLN2 interacts with both poly-ubiquitin chains, which mark cellular proteins for degradation, and proteasomes, which function like cellular recycling machines, breaking down proteins into smaller peptides and amino acids for reuse.

“We believe that a dysfunction of UBQLN2 is relevant for ALS pathology,” says Castañeda, whose research involves proteins associated with neurodegenerative and neuromuscular diseases. “We’re focusing on a particular stretch of amino acids [in UBQLN2] that is affiliated with ALS, and plan to characterize it, structurally and dynamically.” 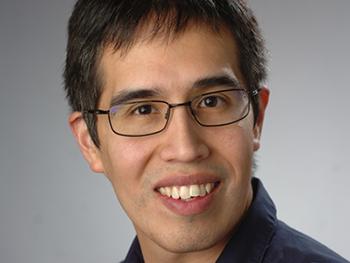 Castañeda and his colleagues hope to prove that the sequence in question interacts with other ALS-relevant proteins, such as TDP-43, an RNA-binding protein; UBXD8, an intrinsic membrane protein; and hnRNPA1, another RNA-binding protein, which is commonly found in breast cancer cells.

The regulation of cellular levels of certain proteins—a process critical to cell survival and viability—is governed by protein synthesis and degradation. Proteins slated for degradation are usually tagged by a small signaling protein called ubiquitin. UBQLN2 then directs the unneeded or damaged proteins to the proteasome, where they are destroyed or recycled.

Unique to UBQLN2 is a stretch of prolines, which are a special class of structurally rigid amino acids. Castañeda contends that ALS-related mutations to prolines affect the structure and dynamics of UBQLN2, thus hindering the degradation process.

“For instance, we know that UBQLN2 interacts with TPD-43, whose dysregulation is found in 97 percent of all ALS cases,” Castañeda says. “By determining where the interaction takes place on each protein, we can better understand the role of UBQLN2 in ALS, and create a foundation for new druggable therapies involving it and possibly TDP-43.”

Castañeda’s work for ORAU involves a step after protein biosynthesis known as post-translational modification (PTM), in which a long chain of amino acids undergoes various transformations that confer new functional properties on the protein. He is using his ORAU award to study the cellular role of a new PTM called Ufm1 and its effect on protein structure, dynamics and function.

Like ubiquitin (a small protein that signals the degradation of proteins), Ufm1 has numerous biological responsibilities. Chief among them is regulating the ER—a network of membranes in a cell that manufactures and packages protein.

Working with Jon Madison, a geneticist at the Broad Institute of MIT and Harvard, Castañeda will spend the next year investigating the biochemical and biophysical possibilities of poly-Ufm1 chains. The Syracuse professor is optimistic that the project will generate sufficient preliminary data to garner larger, federal support.

“Our understanding of how Ufm1 functions is limited, due to the inability to make poly-Ufm1 chains,” says Castañeda, one of 35 ORAU award recipients. “We hope to make Ufm1 signals, using a hybrid chemical and enzyme approach. This way, we can study the signal itself, to see how it interacts with target proteins.”

If successful, the project will be the first to identify specific proteins that interact with poly-Ufm1 chains.

Castañeda is also intrigued by the fact that Ufm1 is found in neurons. “It may have a role in mental illness, such as schizophrenia,” he says. “Our lab will use various experimental and computational methods [including biomolecular nuclear magnetic resonance] to probe this protein on a molecular level.”

Castañeda joined the Syracuse faculty in 2014, following a postdoctoral fellowship at the University of Maryland at College Park. (He earned a Ph.D. from Johns Hopkins University.) In addition to PTMs, he studies structural biology and protein dynamics. His research has been supported by the National Science Foundation, the American Chemical Society, the Burroughs Wellcome Fund and, more recently, the Nappi Family Research competition.

After 25 years working in the field of forensic science and over two decades of executive experience as a laboratory director, Kathleen Corrado has been named director of the Forensic and National Security Science Institute (FNSSI) in the College of…

A key process during the development of an embryo is tissue morphogenesis, where the number of cells in an organism increase through cell division and tissues begins to take shape. Heidi Hehnly, assistant professor of biology, has been awarded a…

With just under a week left before President-elect Joe Biden’s inauguration ceremony, investigators and law enforcement agencies across the country are working speedily to identify as many of the Jan. 6 U.S. Capitol riot offenders as they can. Knowing exactly…

Congenital heart defects are the most common type of birth defect, affecting nearly 1 percent of births in the United States each year, according to the Centers for Disease Control and Prevention. Doctors have been unable to lower that number…

The human body is made up of trillions of cells. Within each cell are proteins which help to maintain the structure, function and regulation of the body’s tissues and organs. When cells are under stress, as in response to heat…