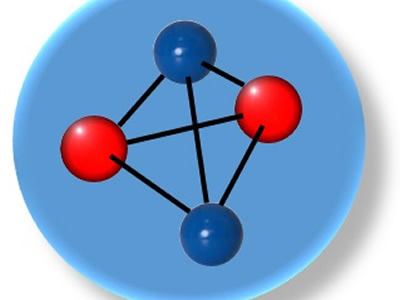 Physicists in the College of Arts and Sciences have made science history by confirming the existence of a rare four-quark particle and discovering evidence of three other “exotic” siblings. Their findings are based on data from the Large Hadron Collider (LHC), the world’s biggest, most powerful particle accelerator, located at the CERN science laboratory in Geneva, Switzerland.

Professor Tomasz Skwarnicki and Ph.D. student Thomas Britton G’16, both members of the Experimental High-Energy Physics Group at Syracuse and the Large Hadron Collider beauty (LHCb) collaboration at CERN, have confirmed the existence of a tetraquark candidate known as X(4140). They also have detected three other exotic particles with higher masses, called X(4274), X(4500) and X(4700).

All four particles were the subject of Britton’s Ph.D. dissertation, which he defended in May and then submitted, on behalf of the LHCb collaboration, as a journal article to Physical Review Letters (American Physical Society, 2016).

A tetraquark is a particle made of four quarks: two quarks and two antiquarks.

Tetraquarks—and, by extension, pentaquarks, containing five quarks—are considered exotic because they have more than the usual allotment of two or three quarks.

“Even though all four particles contain the same quark composition, each of them has a unique internal structure, mass and set of quantum numbers,” says Skwarnicki, who, in April 2014, confirmed the existence of the world’s first charged tetraquark candidate, called Z(4430)+. A year earlier, he and Ph.D. student Bin Gui G’14 determined the quantum numbers of the first neutral, heavy tetraquark candidate, X(3872). 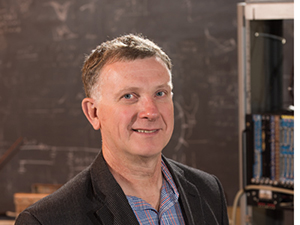 Skwarnicki says the measurement of all four particles is the largest single one of its kind to date. Unlike other exotic particle candidates, his and Britton’s do not contain ordinary nuclear matter (i.e., quarks found in protons and neutrons).

“We’ve never seen this kind of thing before. It’s helping us distinguish among various theoretical models of particles,” Skwarnicki says.

A fellow of the American Physical Society, Skwarnicki is a longtime member of the LHCb collaboration, involving approximately 800 other scientists from 16 countries. Their goal is to discover all forms of matter, in hopes of explaining why the universe is made of it, instead of anti-matter.

Skwarnicki’s work focuses on quarks—fundamental constituents of matter that serve as a kind of scaffolding for protons and neutrons. While most particles have two or three quarks, Skwarnicki and others, in the past decade, have observed ones with four or five.

Last summer, he and doctoral student Nathan Jurik G’16 teamed up with Distinguished Professor Sheldon Stone and Liming Zhang, a professor at Tsinghua University in Beijing, to announce their discovery of two rare pentaquark states. The news made headlines, thrusting Syracuse and CERN into the international spotlight.

According to the Standard Model of particle physics, there are six kinds of quarks, whose intrinsic properties cause them to be grouped into pairs with unusual names: up/down, charm/strange and top/bottom. 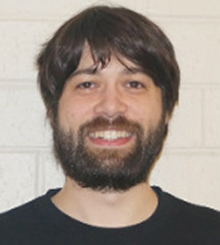 The particles that Skwarnicki and Britton study have two charm quarks and two strange quarks. Charm and strange quarks are the third- and fourth-most massive of all quarks.

That all four quarks in the new family are “heavy” is noteworthy.

“The heavier the quark, the smaller the corresponding particle it creates,” says Skwarnicki, adding that the names of the particles reflect their masses. “The names are denoted by mega-electron volts [MeV], referring to the amount of energy an electron gains after being accelerated by a volt of electricity. … This information, along with each particle’s quantum numbers, enhances our understanding of the formation of particles and the fundamental structures of matter.”

Evidence of X(4140) first appeared in 2009 at the Fermi National Accelerator Laboratory, outside of Chicago, but the observation was not confirmed until three years later at CERN.

Extremely rare and four times heavier than a proton, X(4140) has been initially detected only 20 times out of billions of man-made energy collisions. LHCb is uniquely suited to study such particles, and thus, has gone on to detect X(4140) nearly 560 times.

Skwarnicki attributes the discovery of X(4140)’s three siblings, culled from LHCb data from 2011 to 2012, to increased instrumental sensitivity. It is the energy configuration of the quarks, he explains, that gives each particle its unique mass and identity.

“Quarks may be tightly bound, like three quarks packed inside a single proton, or loosely bound, like two atoms forming a molecule,” Skwarnicki says. “By examining the particles’ quantum numbers, we were able to narrow down the possibilities and rule out the molecular hypothesis.”

Not that the process has been easy. An “aporetic saga” is how Britton describes studying molecular structures that seem to “jump out of the data.”

“We looked at every known particle and process to make sure that these four structures couldn’t be explained by any pre-existing physics,” he says. “It was like baking a six-dimensional cake with 98 ingredients and no recipe—just a picture of a cake.”

A snapshot of LHCb detector data, singling out the collisions that have resulted in the four tetraquarks

Meanwhile, Skwarnicki, Britton and others face the onerous task of combing through data and developing theoretical models, in an attempt to confirm what they have seen.

“It may be a quartet of entirely new particles or the complex interplay of known particles, simply flipping their identities,” Skwarnicki concludes. “Either way, the outcome will shape our understanding of the subatomic universe.”

Syracuse’s research for the LHCb collaboration is supported by the National Science Foundation.