Biologists in the College of Arts and Sciences have been awarded a major grant to study an epigenetic mechanism used by cells to regulate gene expression—a process known as meiotic silencing. 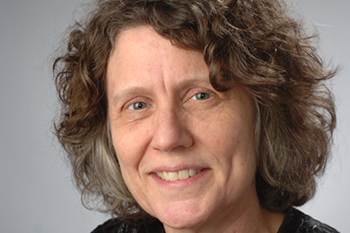 Eleanor Maine, professor of biology, is the recipient of a multiyear, $427,000 grant award from the National Institute of General Medical Sciences, the National Institutes of Health and the U.S. Department of Health and Human Services. She and members of her research lab will use the award to investigate the mechanisms and developmental importance of meiotic silencing.

Epigenetic regulation is implicated in susceptibility to many diseases, including cancers, infectious diseases and neurodegenerative disorders.

“Our lab studies, among other things, epigenetic mechanisms that heritably switch genes on and off in the nucleus of a cell, without changing the genetic structure, ” Maine says. “We’re particularly interested in meiotic silencing, an epigenetic process that occurs in developing reproductive cells, or gametes. In animals, this process takes place at the chromatin level, where DNA combines with proteins to form dense, string-like structures [called nucleosomes].

Chromatin, which condenses into chromosomes during cell division, is composed of DNA strands that are wrapped around groups of small proteins called histones. Scientists know that histones and associated DNA make up nucleosomes, which are basic units of DNA packaging.

That histones may be chemically modified to regulate gene expression—something involving the tightening or loosening of DNA packaging—is central to Maine’s work. She is intrigued by the fact that heritable differences in DNA packaging can impact disease susceptibility.

Maine’s research revolves around Caenorhabditis elegans, a transparent, multicellular roundworm whose genetic and epigenetic makeup shares many features with mammals. 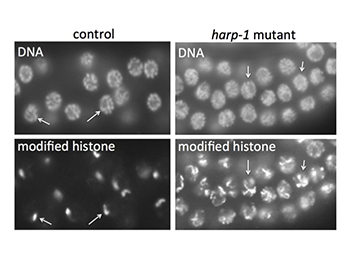 “It’s a model organism for studying chromatin regulation, in context of germline development,” she says, referring to the process that leads to reproductive cells, or gametes, in sexually reproducing organisms. “In C. elegans, the natural target for meiotic silencing is the male X chromosome; however, other chromosomes are targeted under certain conditions, such as when chromosome rearrangements are present. The altered structure of a targeted chromosome is thought of as a kind of protective mechanism.”

Maine explains that meiotic silencing is accomplished by DNA repair proteins collaborating with known epigenetic factors. She and her colleagues hope to elucidate the biological roles of these factors during germline development.

Although repair proteins are critical for gamete formation, Maine and others are unclear of how they work together in this context.

“Our studies will provide information that enables us to better grasp the mechanism of meiotic silencing,” says Maine, adding that such work has implications for understanding how epigenetic mechanisms impact the development of other tissues. “Sometimes, these mechanisms can go awry and lead to disease. ”

They also want to figure out how mechanisms ensure the integrity of genetic material during gamete formation.

“Our observations are significant because they address a conserved epigenetic regulatory mechanism that is active in the germ line,” Maine says. “By understanding the mechanism and regulation of meiotic silencing, we’ll be able to investigate the developmental implications of the process.”

Maine hopes that, by studying meiotic silencing in C. elegans, she will better understand the process in more complex animals, including mammals.

“We’ve assembled a team of researchers with appropriate expertise to accomplish the proposed work,” she adds. “Graduate and undergraduate students will be integral to the project.”