Jeffrey M. Stanton, a widely published and respected scholar and a seasoned university administrator, has been appointed associate provost for academic affairs. He succeeds Andria Costello Staniec, who after more than four years as associate provost will step down from the post to return to the faculty of the College of Engineering and Computer Science. Stanton’s appointment is effective July 1. 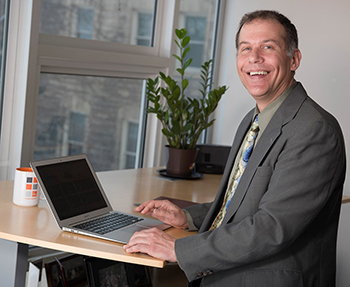 In his new role, Stanton will assist Vice Chancellor and Provost Michele G. Wheatly with the daily operation and optimization of the Division of Academic Affairs. He will play a critical role in supporting and implementing the Academic Strategic Plan and aligning it with the University’s physical presence and infrastructure.

“Jeff brings to the position a distinctive appreciation for the multiple missions of Syracuse University, including teaching and learning, federally funded research, entrepreneurialism and organizational behavior,” says Provost Wheatly. “With years of experience in private industry, followed by a distinguished academic career, and higher education leadership experience and training, Jeff is extremely well suited for this new role. He also exhibits extraordinary leadership skills and his experience with large-scale collaborative research projects brings with it a keen understanding of how to rally support behind meaningful and positive change.”

Stanton, a faculty member in the School of Information Studies (iSchool) since 2001, served as interim dean from January 2015 to May 2016. Before that, he was the iSchool’s senior associate dean and chair of the University’s Institutional Review Board. During the 2012-2013 academic year, Stanton was a fellow of the American Council on Education in its emerging leaders fellowship program. He is also a graduate of the EDUCAUSE/CLIR Leading Change Institute. In 2011, he was named the University’s first associate vice president for research, a rotator position intended to strengthen the connections between the Office of Research and researchers in the schools and colleges. Stanton also helped to design the iSchool’s Innovation Studio, a classroom environment designed to encourage hands-on, problem-focused learning.

“I am very excited to join Provost Wheatly’s team, and I’m looking forward to continuing the excellent work that Andria has been doing,” says Stanton. “I’m optimistic that my lengthy experience as a faculty member here at Syracuse, together with some of the administrative work I have done, will allow me to work effectively with all the people whose efforts depend on the academic affairs office.”

Stanton’s background also includes more than a decade of experience in business—both in established firms and startup companies. He earned a Ph.D. and a master’s degree in industrial/organizational psychology from the University of Connecticut, and a bachelor’s degree in computer science from Dartmouth College.

As Stanton’s appointment marks the conclusion of Costello Staniec’s tenure as associate provost. Provost Wheatly thanked her for her deep commitment to student academic success, her dedication to academic and research excellence and her hard work on behalf of the University’s academic vision and mission.

“Under Andria’s leadership, several significant initiatives aimed at helping our students succeed and thrive inside the classroom were initiated and strengthened,” says Provost Wheatly. “She has left a lasting impact across campus. I wish her well as she continues her academic journey, and I look forward to collaborating with her upon her return to the faculty.”

Costello Staniec had served as associate provost for academic programs since July 2012. In that capacity, she was charged with ensuring the quality and effectiveness of academic programs and the academic success of Syracuse students. She oversaw development of policies and programs that promote instructional quality, advising effectiveness and positive student outcomes; and advanced interdisciplinary academic programs aligned with institutional strengths, faculty expertise and interest, and demand.

“Andria’s work touched many major initiatives across the University—from academic oversight of athletics, academic integrity, retention, assessment and accreditation to providing leadership for a diverse set of offices, ranging from the Shaw Center to Office of Disability Services to Project Advance,” says Assistant Provost for Academic Affairs Gerald Edmonds, who worked closely with Costello Staniec. “I was fortunate to have had the opportunity to work with Andria and for us to have the resources needed to accomplish this important work on behalf of the University.”

Among other achievements during her tenure, Costello Staniec envisioned and created a new student-athlete academic support unit; created the Office of Assessment and Accreditation and initiated a campuswide annual assessment program; instituted the campuswide advising program Orange Success and a degree audit system; and oversaw revisions to the University’s academic integrity policy.

As associate provost, she also had responsibility for ensuring the University’s continued accreditation by New York State and the Middle States Commission on Higher Education. In that capacity, she wrote the successful 2013 Middle States Periodic Review Report as well as the 2016 Middle States Self-Study design, which sets the foundation for the 2018 decennial review. She also served as a key member of the Academic Strategic Plan Steering Committee and as a co-facilitator for the plan’s preliminary implementation phase.

Costello Staniec came to Syracuse University in 1999 as a member of the civil and environmental engineering faculty. Prior to her appointment as associate provost, she served as associate dean of student affairs in the College of Engineering and Computer Science. She plans to take a one-year leave and then resume her teaching and research activities as a member of the college’s faculty in 2017.