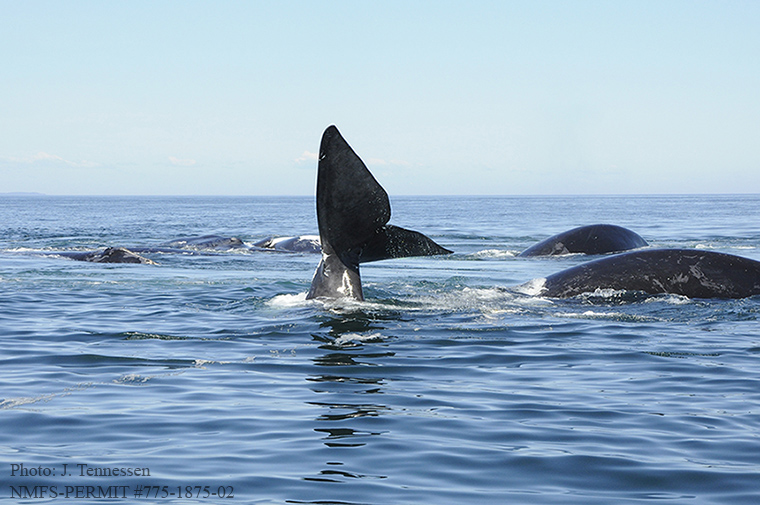 Right whales in a surface active group in the Bay of Fundy, Canada (Photo by J. Tennessen)

A new study by researchers from the Department of Biology in the College of Arts and Sciences indicates that endangered right whales have individual and unique voices.

The paper was published in Endangered Species Research and is authored by Jessica McCordic and her master’s thesis advisor, Susan Parks, along with Holly Root-Gutteridge, Dana Cusano and Samuel Denes. The paper details their research, which analyzed more than a decade of recorded right whale calls from 13 different individuals. The sounds were recorded using suction-cup acoustic tags attached to the animals to see whether their sounds could be used to tell the whales apart.

“Using acoustic recordings to not only detect but to actually help count, or even track, individual whales of this endangered species in a particular area would greatly improve our ability to protect them,” says Parks.

Being able to discern the voices of the individual right whales would have a major impact on this critically endangered animal. The North Atlantic right whales were nearly hunted to extinction during the historic commercial whaling era. Now, there are approximately 500 individuals left, and those individuals still face threats such as ship strikes and entanglement in fishing gear.

Researchers say one of the biggest challenges in conserving this species is simply keeping track of them. Careful monitoring gives researchers insights into population size and habitat use. The study published in Endangered Species Research is a proof-of-concept exploration into the realm of using sound to identify individual whales.

Individuality in the calls of terrestrial mammals has been extensively studied, but research on such patterns in marine mammals is limited.

“This study is the first to show individuality in a whale call that is produced throughout the year by all individuals. For large whales, the only previous research to address individuality specifically involved the songs of adult male humpback whales,” says McCordic

McCordic says that this research offers promise for further study, but cautions that researchers cannot yet recognize individual whales from a single call. She explains that she hopes future studies will be able to use this information to develop new tools for improving estimations of density and abundance of right whale populations using acoustics.

“The next step in the research is to test whether recordings made from devices other than ones attached to the whales produce similar results. Furthermore, I would want to see if the same individual’s calls remain stable over multiple months or years. The long-term goal of using acoustic recordings to detect specific right whales would provide valuable data to assist in right whales’ recovery,” says McCordic.

To listen to a sample of right whale voices, click on the audio file below: