Earth scientists in the College of Arts and Sciences are changing the way they study the geological record, thanks to new advances in three-dimensional modeling. 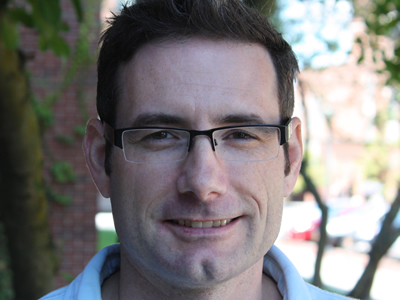 Robert Moucha, assistant professor of geophysics, and Gregory Ruetenik, a Ph.D. student in Earth sciences, have collaborated with Gregory Hoke, associate professor of Earth sciences, on a unique numerical modeling study that simulates changing terrain over millions of years. Their study shows that moderate changes in dynamic topography produce an erosional response in the form of increased sediment flux to continental margins (i.e., the rate of sediments supplied to margins by streams and rivers).

Their findings are the subject of an article in Terra Nova (Wiley Online Library, 2016), and have major implications for the study of geomorphology, geodynamics and climate.

“This kind of modeling contributes to our understanding of mantle convection,” says Moucha, referring to the process in which heat from inside the Earth rises to the surface. “By drawing on elements of physics, chemistry and mathematics, we can infer how the Earth’s surface evolution is affected by mantle convection and the interaction with various crust and surface processes, including the climate.”

Erosional response usually persists long after dynamic topography, and is dependent on the interplay of uplift rate, rock and soil erosion and initial topography.

Dynamic topography is the resulting surface deformation, characterized by long, low-amplitude, wave-length undulations, driven by convection in the Earth’s mantle.

“Comparing backward-in-time models of dynamic topography with observed offshore sedimentary records is challenging,” Moucha says. “The problem with this approach is that it’s difficult to deconvolve the observed record into contributions from changes in climate, tectonics and dynamic topography. As a result, we get disparities in our comparisons.”

To rectify the situation, Ruetenik and Moucha have constructed a landscape evolution model (LEM) that quantifies landscape responses to moderate changes in dynamic topography.

LEMs are nothing new—geophysicists have been using the grid-like programs since the ’90s to simulate fluvial and slope erosion—but Ruetenik and Moucha have taken enhanced computing to a new level. Their LEM uses advanced mathematical modeling to show how processes such as climate, erosion and uplift influence the formation of river systems and drainage areas over large continental scales and tens of millions years.

This is in contrast to traditional LEMs, which are designed for regional studies and periods between 10,000-100,000 years, and, thus, are unable to capture large-scale changes in dynamic topography.

“Our focus here was to characterize the erosional response to changes in dynamic topography, in terms of the sedimentary flux to continental margins,” Moucha says. “We also considered the effects of offshore sediment deposition and changes in precipitation.” 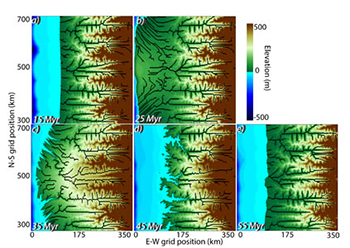 An LEM showing coastal response to a dome of dynamic uplift, as it moves across the landscape from left to right at two centimeters a year. The dome is centered in Panel C, in the lower lefthand corner.

A versatile scientist in large-scale geophysics and geodynamics, Moucha is interested in the topography of Africa, Norway and the southwestern United States and in long-term sea-level change along the eastern coast of North America.

His new LEM utilizes a hypothetical continental that moves from east to west, across a 200-meter-high, 200-kilometer-wide dynamic topography dome. The purpose of the dome, he says, is to record erosion and sedimentation, as well as drainage basin evolution.

“We’ve found that moderate changes in dynamic topography modulated the erosional response of landscapes with pre-existing relief,” Moucha says. “This results in enhanced sediment flux that can persist for tens of millions of years, as the landscape re-equilibrates. The response is maximized when moderate changes [in dynamic topography] are long-lived and erodibility is high.”

He and Ruetenik also have found that the stream and river network is dependent on the direction of the wave of uplift sweeping across the landscape.

“Upstream propagation is more likely to reroute streams, whereas streams maintain their course when propagation is downstream,” Moucha says. “This kind of research provides a roadmap for understanding the tectonic evolution of our planet. It also creates a framework for integrating independent geophysical techniques with geological observations.”