Since it launched in 2011, Snapchat has established itself as one of the top social media platforms, especially among young people—so much so that it recently leapfrogged Instagram as the preferred social media platform among teens, according to Piper Jaffray’a semi-annual “Taking Stock With Teens” study. Naturally, many brands are seeking to capitalize on the app’s popularity as they have with Facebook, Twitter and Instagram. 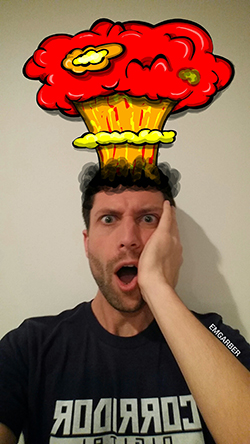 That’s where Evan Garber ’10 comes in. Garber, a mechanical engineering alumnus and early adopter of Snapchat, has established a career as a full-time snapchatter, using the application as a platform to create stunning and engaging Snapchat art and social media content for top brands, including Disney and General Electric.

Garber recently returned to campus to share how he went from an average user to a leading Snapchat influencer, strategist and expert.

Take us back to those early days of Snapchat. What were your earliest experiences with the platform?

“In the beginning, I was just sending snaps to friends. We’d experiment with the app’s color palette to draw on our snaps and try to one-up each other for fun. Along the way, I started to learn techniques to create higher-quality images. I realized I had a knack for it pretty quickly.”

How did brands discover your work?

“I created profiles on other social media platforms like Twitter and YouTube to be able to publish my Snapchat drawings in a place they could live longer than 24 hours, like they do on Snapchat. Randomly one day a ton of people were adding me. I linked it back and saw it was all coming from an online magazine that had millions of followers. They thought I was doing something very unique, treating my phone as a canvas, and featured my work.”

“That attention made me realize that there was a ton of potential in Snapchat. I was one of the first-to-market influencers, so I seized the opportunity and ran with it. That’s where it took off.”

Most people wouldn’t see “social media expert” as a career option for a mechanical engineer. How does your education contribute to your success in this field?

“My degree taught me that problem solving and critical thinking can be applied to anything.”

“General Electric actually chose to work with me specifically because I had an engineering background and that is the biggest project I’ve done. It was called Project Garages. We went around the world and showcased innovators. Most of the time they were working out of their homes. Our goal was to show that disruptive, innovative ideas can come from anywhere.”

“I like to keep the engineering and science at the forefront. I’ve done do-it-yourself experiments, where I present the materials, show how to do something creative and just go for it. Creating your own lava lamp, for example. People have sent me back snaps with them doing the experiment. It’s cool to be able to use my knowledge of engineering and my social media skills to create content that’s fun and engaging and accurately conveys complex topics.”

If Snapchat were to go the way of MySpace or other bygone platforms, what would you do?

“I also have the option of pursuing a career in mechanical engineering. Either way, my time at Syracuse University will have contributed to where I go next.”