Chemists in the College of Arts and Sciences have come up with an innovative new way to visualize and monitor chemical reactions in real time. 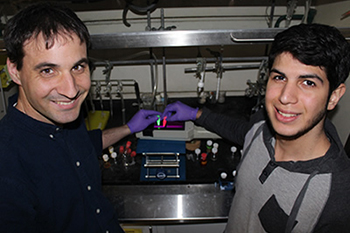 Members of the Maye Research Group in the Department of Chemistry have designed a nanomaterial that changes color when it interacts with ions and other small molecules during a chemical reaction.

The subject of an article in ACS Nano (American Chemical Society, 2016), their discovery enables researchers to monitor reactions qualitatively with the naked eye and quantitatively with simple instrumentation.

“In many cases, a chemical reaction between molecules occurs in a solution that is colorless and transparent or looks like a milky suspension,” says Mathew Maye, associate professor of chemistry and the experiment’s team leader. “The only way to know if a reaction has occurred or not is to perform extensive analysis after a multi-step purification.”

In an attempt to figure out why and how fast a reaction occurs (if at all), the group has designed a nanoparticle that reacts with byproducts of the reaction. “When the reactions occurs, the nanoparticle fluoresces at a different color, allowing us to gauge kinetics by eye, instead of with a million-dollar spectrometer,” Maye says.

At the nanoscale, perovskites are photo-luminescent, meaning that they emit light when “excited” by a laser or lamp. That the colors they emit are determined, in part, by their ion concentrations makes perovskites unique among nanomaterials.

It also makes them ripe for application. Research groups in industry and academia see potential for perovskites in solar cells, light-emitting diodes, lasers and photo detectors.

Tennyson Doane, a post-doctoral researcher in the group, is the article’s co-corresponding author with Maye. “We knew about the potential of these materials in energy research,” Doane says. “We are interested in energy as well, and had this crazy idea of trying to use the ion concentration ratios of perovskites to detect ions in solution, and then perhaps monitor the chemical reaction, which is very difficult to do. We had no idea if it would work or not, so we just decided to go for it.”

The group started by working with a very simple system that involved organic reactions of molecules called organohalides. When these molecules react, often forming carbon-carbon double bonds in what is known as an elimination reaction, the halide is released. (The halide is a bromine, chlorine or iodine ion.) Typically, the halide is an unimportant side-product of the reaction, until now.

“Our technology allows us to accurately detect the halide release,” says Kevin Cruz ’18, a chemistry major and co-author of the article. “When the reaction starts, the perovskite fluoresces bright red. As the halide is released, or exchanged in the chemical reaction, our particle absorbs it, and the fluorescence color changes proportionally to the halide concentration—from red to orange to yellow to green. When the color is green, the reaction is over.”

Explains Doane: “Added to that is the fact that the perovskite concentration is very low, you just have to add a small amount to the reaction for observation. We have been able to calibrate the system very accurately, and from that can measure chemical kinetics in a new ‘colorimetric’ way.”

Maye offers nothing but praise for Doane and Cruz, stating that what they have accomplished in a short amount of time and on a small budget is “amazing.”

“No one, right now, is thinking about monitoring a chemical reaction this way,” Maye adds. “Our team is able to measure very precise chemical kinetics by monitoring the color change with nothing more than an ultraviolet lightbulb or a cheap fluorescence spectrometer.”

In addition to Doane, Cruz and Maye, the article was co-written by Kayla Ryan G’15, Ph.D. student Laxmikant Pathade and Huidong Zang and Mircea Cotlet at the Center for Functional Nanomaterials at Brookhaven National Laboratory, each of whom made important measurements in the study.

The group’s technology is patent-pending at the University. Maye says they are testing the approach’s applicability to a wide library of chemical reactions and its effectiveness at measuring low concentrations of ions and reactive molecules.

“Who knows, maybe in the future, every chemist will use a Syracuse-based perovskite for monitoring their reactions,” he adds.