Snigdha Chatterjee ’17 has received two prestigious awards from the American Society of Plant Biology (ASPB). She was awarded both a travel grant and a Summer Undergraduate Research Fellowship. Between the two awards, Chatterjee is supported to travel to the society’s annual meeting for the next two summers, as well as perform research during the summer of 2016. 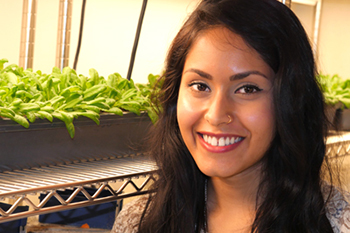 Chatterjee is the only undergraduate in the nation to be awarded this year’s ASPB travel grant. “I could not believe it,” she says of her initial reaction to the news. Her mentor, Ramesh Raina, credits Chatterjee’s strong application. He explains, “Selection of these awards is primarily based on the abstract submitted by the student, which means the selection committee was impressed with what Snigdha is doing and will be presenting at the meeting.”

The travel grant will support Chatterjee to attend the ASPB meeting in Austin, Texas, this July, where she will present her research on plant defense systems. The Raina lab, Chatterjee included, investigates the role of epigenetics in plant defenses against disease. Epigenetics concerns changes in the expression of genes by modifying the three-dimensional shape of DNA through a process known as chromatin remodeling. Or, as Chatterjee explains, “Epigenetics is the heritable change in gene expression that is not due to a change in the actual DNA sequence.”

Chatterjee’s project involves a gene that controls drought and disease resistance. She found that the gene, DDR1, is involved in plant cell death, drought resistance and defense when plants are exposed to harmful bacteria. “To the best of our knowledge, DDR1 is the first chromatin remodeler that has been shown to regulate drought tolerance and cell death in plants, and that is very exciting.” She further explains that a long-term goal of the research is to “develop novel approaches to create crop plants that have enhanced resistance against pathogens and drought.”

The Summer Undergraduate Research Fellowship will support Chatterjee’s further investigations into epigenetics and plant disease responses. The fellowship, which was awarded to only 15 students this year, provides a stipend, funding for research supplies and additional travel funds for ASPB’s 2017 conference in Honolulu.

Chatterjee, a native of East Syracuse, is working on majors in biotechnology and biophysical science, in addition to a minor in chemistry. She has been with the Raina Lab since her freshman year.

While not studying and researching, Chatterjee also finds time for community service. She serves as master of ceremonies and service co-chair of the professional chemistry fraternity, Alpha Chi Sigma. Additionally, Chatterjee tutors refugee children for the Young Scholars through the Office of Engagement Programs on campus.

After graduating next May, Chatterjee is interested in continuing her epigenetics research at a graduate school. Raina suggests her passion for research will take her far, “Snigdha is one of the most dedicated, committed and organized undergraduate students I have had in my lab. She is very passionate about research,” he says.