Rick and Ryan Oddo—Two Generations of STEM and Service

All Syracuse grads are part of an extended alumni family, but certain members are actually related. 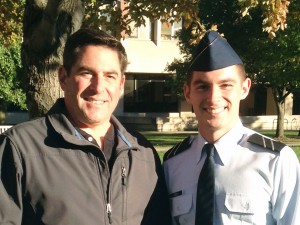 Take Rick ‘86 and Ryan Oddo ’18 for example. In 1986, Rick Oddo earned an electrical engineering degree from the College of Engineering and Computer Science and completed an experience with the Syracuse U.S. Air Force Reserve Officers’ Training Corps (ROTC). Today, his son Ryan is an aerospace engineering major and ROTC cadet in the very same detachment his father was in two decades before.

The Oddos’ shared values, experiences and familial bond intertwine to paint a picture of service and success that is quintessentially Orange. Both of them have an innate inclination to solve problems and tackle technical subjects, making engineering an ideal pursuit. In adopting the Air Force’s core values—integrity first, service before self and excellence in all they do—they have developed a degree of self-discipline that contributes greatly to how they approach their work and their studies.
Rick says, ”ROTC shaped my leadership abilities and laid the foundation that gave me an opportunity to spend 15 years giving back to my country. The skills and values that are important in the military are invaluable in the business world and paramount to doing well in life.”
Rick’s path to success provides an undeniably strong template to follow and it’s clearly an inspiration for Ryan’s personal development. However, despite the similarities of their experiences, Ryan’s hard-earned accomplishments are his own. He says, “My dad is someone who decided for himself what kind of person he wanted to be. It inspires me to do that for myself.”
Rick now applies his talents to entrepreneurship as the COO of Micropore, a small business technology and manufacturing company that develops CO2 adsorbent cartridges used in rebreathing and life support applications. This follows a 15-year career in service of the U.S. Air Force.
Ryan will spend at least four years in active duty for the Air Force after graduation. He’s confident that by applying his aerospace engineering skills and ROTC values he will have many opportunities to emulate his father while establishing himself in his own right.