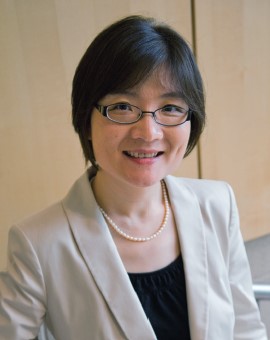 The first named faculty position in the iSchool’s history, the Katchmar-Wilhelm professorship was made possible from a portion of the generous bequest of Estelle Wilhelm ’38, ’39 that the school received in October 2013.

The professorship is designed to provide support during a three-year term to an associate professor, to help that faculty member achieve their career goals, enhance their own reputation and that of the School, and ultimately achieve promotion to full professor.

“I was thrilled when I received the award notification,” says Yu. “As a recently tenured associate professor, I’m trying to plan the next phase of my career, and writing the proposal for the professorship pushed me to think hard about my mission as a researcher and educator over the next few years.”

“I’m particularly interested in developing intelligent tools that can help the public access and understand scientific literature, and thus reduce public doubt in science knowledge,” says Yu. “This type of knowledge is increasingly important for public policy and everyday life, in such areas as environmental protection and evidence-based medicine, but public opinion can strongly influence government policy.”

“Filling the gap between science knowledge and public understanding is critical for our democratic society,” Yu explains, noting that traditional science communication approaches are challenged by diversified information sources and the viral spread of information across social media.

“This brings further challenges to spreading correct science knowledge, and media studies have shown that once a misunderstanding is formed, it is very hard to correct it,” says Yu. “It is critical to prevent misinformation whenever scientific topics appear in news or social media. I would like to design tools that can automatically find and link news or social media messages to relevant science literature. It would be even more fun to collaborate with students and artists to explain science methods through easy-to-understand illustrations, for example, ‘what is a prospective cohort study?’”

Yu will begin her supported research work later this semester.

“I am delighted that Bei was selected as the inaugural recipient of the Katchmar-Wilhelm professorship,” says iSchool Interim Dean Jeff Stanton. “She submitted a highly meritorious proposal with the promise of substantially strengthening the broader impacts of her research program, and I am hopeful that the establishment of this professorship marks the start of a renewal and expansion of the iSchool’s research capabilities.”