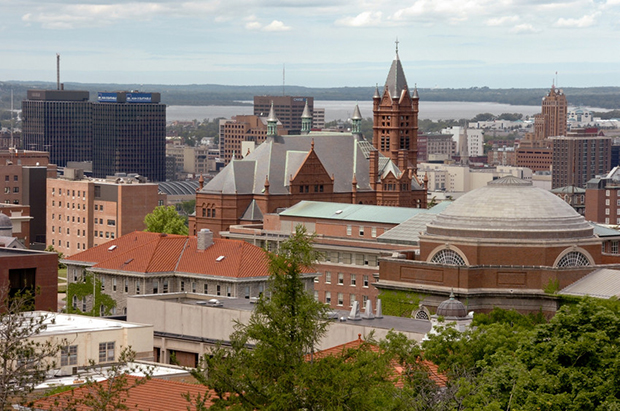 Syracuse University and the City of Syracuse have renewed their five-year services agreement.

Syracuse University and the City of Syracuse today announced the renewal of a five-year services agreement aimed at enhancing an already strong relationship while improving the region’s public safety, infrastructure and its residents’ overall quality of life. This agreement comes on the heels of a 2011 services agreement, in which the University significantly increased its financial support of the city.

“Since I came to Syracuse two years ago, I have truly learned how much Syracuse University means to this city and community. The University is woven into the fabric of Central New York,” says Chancellor Kent Syverud. “Just as important, the University is an extremely powerful economic engine for the city, county and region, with an estimated $2.2 billion annual economic impact. In addition to this vast positive impact, the University also directly supports the city in recognition of services it provides.”

The University will also provide a one-time annual increase of $85,000 to support neighborhood organizations under the guidance of the long-standing University Neighborhood Services Agreement Advisory Committee. As the safety of its students, faculty, staff and visitors remains among the Chancellor’s top priorities, a portion of these funds will be used to pay for additional Syracuse City Police patrols along the borders of campus, particularly in the East neighborhood. Overall, the cumulative total to the City of Syracuse under the new agreement is close to $7 million between 2017-2021.

Syracuse University will also provide additional support services to the City of Syracuse, including providing routine maintenance and improvements of Walnut Park. The University’s Department of Public Safety will provide park oversight by regularly patrolling the park and its surrounding areas.

The new agreement also acknowledges the many supports and contributions the University provides to the City on a regular, ongoing basis, the value of which can’t be precisely accounted for. Examples of this include: full-tuition Say Yes scholarships for qualified graduates of Syracuse City High Schools; community revitalization initiatives such as the Connective Corridor; public safety support to the Syracuse Police Department; faculty/student support for educational initiatives within the Syracuse City School; and University IT support for the City’s efforts to expand broadband.  A full list can be found here: EXHIBIT A_services to City_edp (4).

“The foundation of our economy is built on the thriving educational and medical institutions that call the City of Syracuse home. These facilities employ thousands of workers and generate millions of dollars in economic activity. They also benefit from expensive city services, like fire and police protection; public works like snow removal, permitting and code inspections for construction projects; and access to our quality clean water system,” says Syracuse Mayor Stephanie A. Miner. “I thank Chancellor Syverud for his support in this effort and appreciate the work he and his team have put into making this possible.”

As the University moves forward on implementing a number of key initiatives contained in the Campus Framework, this new agreement creates a stronger, more collaborative partnership that will benefit both the University and the City of Syracuse.

The Mary Ann Shaw Center for Public and Community Service (Shaw Center) administers the Robert B. Menschel Public Service Award. This award was established to honor Robert Menschel and to perpetuate his commitment to the not-for-profit world by supporting undergraduate…

Center for Learning and Student Success: A Resource for All Students

Some students seek tutoring only after they have academic setbacks, but Alejandro Parra tapped the Center for Learning and Student Success (CLASS) early in his Syracuse University career. A first-year student from Queens, New York, Parra was a little nervous when…

Rikki Sargent came to Syracuse University to study social psychology, but the Graduate School’s student marshal is leaving with a network of collaborators from across the University, including the Newhouse School, the College of Law and the Lerner Center for…

Nine Syracuse University faculty members have been honored for their excellence in teaching with the Meredith Teaching Recognition Award. In 2001, the Meredith Professorship Program was expanded to create the award, which recognizes exemplary teaching by non-tenured faculty in two…

Two cohorts of the Laura J. and L. Douglas Meredith Professorship of Teaching Excellence have been named this year. The 2020-23 Meredith Professors are Melissa Chessher, professor and chair of magazine, news and digital journalism in the S.I. Newhouse School…