The Information Security Club at the School of Information Studies (iSchool) is headed to Orono, Maine, this weekend to participate in the 2016 Northeast Collegiate Cyber Defense Competition (NECCDC). 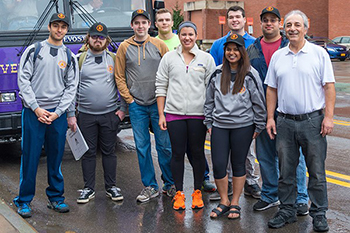 Members of the iSchool’s Information Security Club, along with faculty advisory Bahram Attaie, right, get ready to board the bus for Orono, Maine.

The NECCDC event is one of many that the club has participated in so far this academic year. Other events leading up to the competition have included:

“We started preparing in the fall by signing up over 20 of our students in the National Cyber League, which is an online competition,” explains Attaie. “The students formed smaller teams for the playoffs and we were very excited as one of our teams finished fourth in the country.”

In October, the club sent a four-person team to the University of Connecticut for CyberSEED 2015, and then traveled to the Rochester Institute of Technology for the inaugural CPTC event.

“We are very proud that we placed third in the CPTC,” says Attaie. “The team did very well in RIT’s first collegiate-level penetration testing competition.”

At the beginning of the spring semester, the club had to compete in a qualifier challenge to earn a spot among the 10 teams selected for NECCDC. The winner of the NECCDC event this weekend will travel to the National Collegiate Cyber Defense Competition in San Antonio, Texas, in April.

“Our club has been extremely busy with training and competitions to prepare us for NECCDC,” notes Attaie, “and we’re proud to represent the iSchool and Syracuse University in Maine this weekend.”