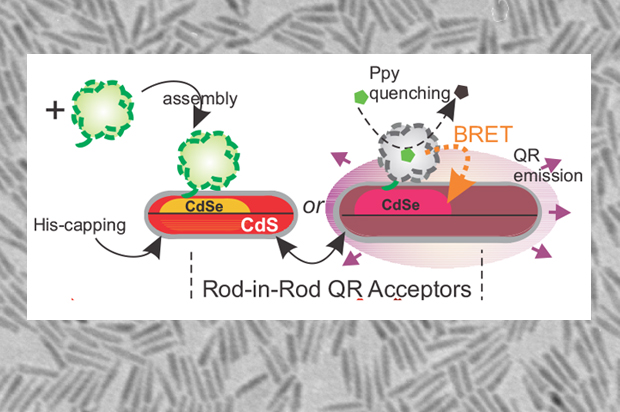 A schematic of the nanobiosystem, surrounded by an electron microsope image of quantum rods

Chemists in the College of Arts and Sciences have made a transformational advance in an alternate lighting source—one that doesn’t require a battery or a plug.

Associate Professor Mathew Maye and a team of researchers from the University, along with collaborators from Connecticut College, have recently demonstrated high-efficiency energy transfer between semiconductor quantum rods and luciferase enzymes. Quantum rods and luciferase enzymes are nanomaterials and biomaterials, respectively. When combined correctly, these materials produce bioluminescence—except, instead of coming from a biomaterial, such as a firefly enzyme, the light eminates from a nanomaterial, and is green, orange, red or near-infrared in color.

The findings are the subject of a recent article in ACS Nano (American Chemical Society, 2016).

Three of the researchers involved in the lighting research. They are, from left: Liliana Karam, Mathew Maye and Tennyson Doane.

“Think of our system as a design project,” Maye says. “Our goal has been to build a nanobiosystem that’s versatile enough to teach us a lot, while allowing us to overcome significant challenges in the field and have practical applications. The design involves materials from our chemistry and biology labs, as well as various nanoscience and self-assembly tools. It’s a true team effort with multiple collaborations.”

Maye illustrates his point by referencing quantum rods, each of which is four nanometers wide and 50 nanometers long. (A nanometer is 1 billionth of a meter.) “The rods were chemically synthesized with amazing precision,” he says. “To get the best information, we realized that we needed at least two different types of rods, each with three synthetically tuned variations and up to 10 different assembly conditions.”

Having a wide range of variables has enabled Maye and his team to learn more about the science of nanobiology energy transfer.

Prior to becoming a postdoc at the University of Notre Dame, Rabeka Alam G’13 led the project at Syracuse as a Ph.D. student. She says this work illuminates a special kind of interaction known as bioluminescence resonance energy transfer (BRET). “In nanoscience, a quantum dot or rod is typically an energy donor,” she says. “In our case, the energy came from bioluminescent luciferase.” 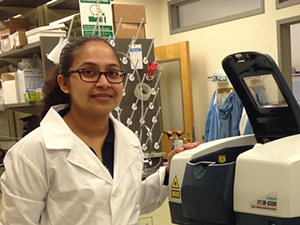 With BRET, the enzyme is attached to the surface of the rod. Luciferin is added, and acts as a kind of fuel. When the enzyme and fuel interact, they release an energy that is transferred to the rod, causing it to glow.

“The trick to increasing the efficiency [of BRET] is finding the right donor-acceptor combination, which requires different rods and enzymes,” says Liliana Karam, a Syracuse Ph.D. student who currently heads up the project. “Thanks to our colleagues at Connecticut College, we have genetically manipulated enzymes of multiple colors that are attached to the rods, which, in turn, are prepared in our lab at Syracuse.”

Bruce Branchini, the Hans and Ella McCollum ’21 Vahlteich Professor of Chemistry at Connecticut College, collaborates on the project. His group provides Maye’s team with the luciferase enzymes.

Maye says the quantum rods are composed of semi-conductive elements—specifically, an outer shell of cadmium sulfide and an inner core of cadmium selenide. By manipulating the size and shape of the core, the length of the rod and the way the enzymes are attached and packed onto the surface of the rod, researchers are able to alter the color and intensity of the light that is emitted, thus demonstrating the overall efficiency of the process.

Postodc Tennyson Doane, a senior member of the Maye Research Group, says one of the breakthroughs of the project involves a special type of rod known as a “rod-in-rod.” The group has been hypothesizing why this particular rod results in high-efficiency gains.

“When you have a rod-shaped core, the resulting fluorescence is polarized, meaning circular light comes in, and linearly polarized light comes out,” says Doane, adding that the shape of the material makes BRET more efficient. “We believe that, when aligned correctly with the luciferase-excited state, the rod experiences efficiency gains that otherwise are not witnessed in a self-assembled nanosystem. Controlling the enzyme location and bioluminescence polarization may, one day, lead to novel ‘light switches,’ in which only certain enzymes around the quantum rod are able to interact via BRET.”

“Our nanorods are made of the same materials used in computer chips, solar panels and LED [light-emitting diode] lights. At the moment, our system works best in the red to near-infrared range, which has longer wavelengths than visible light, and is invisible to the eye,” he says, alluding to night-vision goggles, medical imaging and rapid microbial detection. “Our work is patent-pending at Syracuse. Perhaps, we’ll someday have firefly-covered nanorods that can be inserted into LED lights and don’t require a plug.”

Maye’s and Branchini’s projects are both supported by the Air Force Office of Scientific Research. Maye’s work has also been supported by a Presidential Early Career Award for Scientists and Engineers (PECASE) from the U.S. Department of Defense, a faculty fellowship from the Forensic & National Security Sciences Institute in Arts and Sciences and a Dean’s Professor fellowship from Arts and Sciences.

Additional support comes from the Syracuse Biomaterials Institute and the Center for Functional Nanomaterials at Brookhaven National Laboratory, the latter of which is supported by the U.S. Department of Energy.