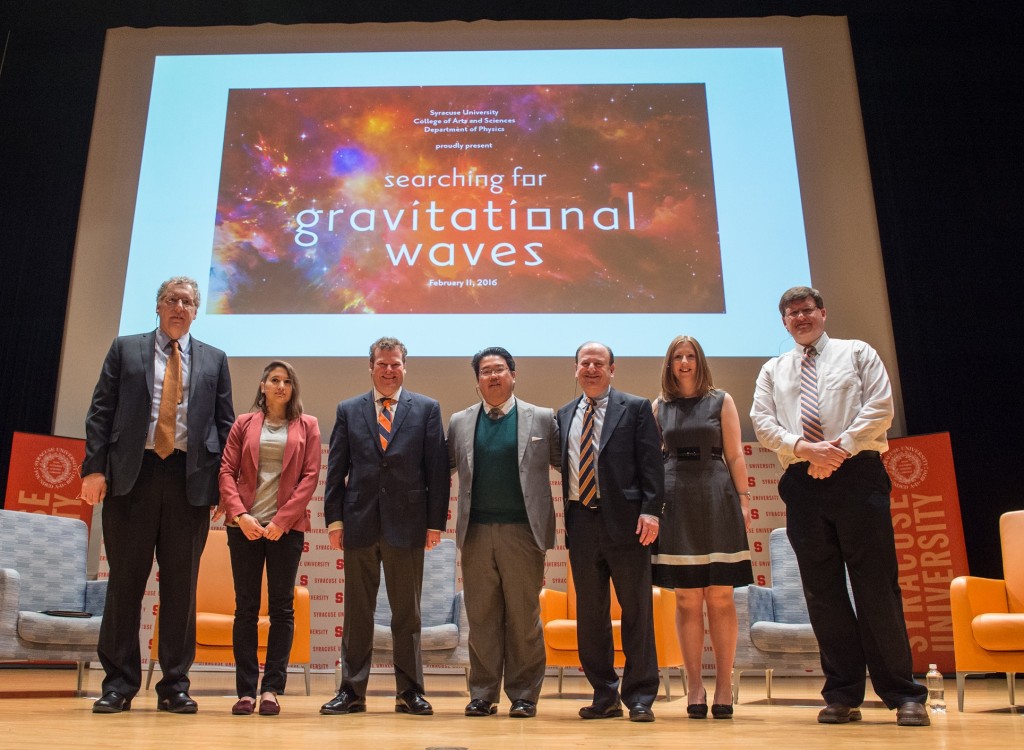 Syracuse University hosted a live broadcast of the NSF press conference about the detection of gravitational waves and held a panel discussion in Goldstein Auditorium at the Schine Student Center Thursday. From left are A. Alan Middleton, professor and chair of physics; Samantha Usman ’16, double major in physics and mathematics; Duncan Brown, the inaugural Charles Brightman Endowed Professor of Physics; Thomas Vo, a Ph.D. student in physics; Peter Saulson, the inaugural Martin A. Pomerantz ’37 Professor of Physics; Laura Nuttall, a postdoctoral research associate in physics; and Eric Sedore, associate CIO in Information Technology Services. Photos by Steve Sartori

From all over campus to all around the world, a momentous discovery in the world of physics—in our universe—was made known Thursday, confirming what Albert Einstein brilliantly hypothesized 100 years ago.

The announcement: Gravitational waves exist. A major prediction of Einstein’s 1915 general theory of relativity is correct. And the endeavors of many scientists, including the instrumental work of Syracuse University’s own physicists, has made it happen.

The National Science Foundation (NSF), which led the funding for the technical resources and researchers from across the world to explore this breathtaking area of science, broke the news Thursday in Washington, D.C. 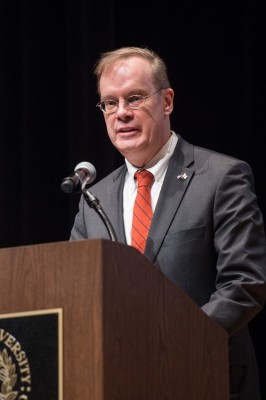 As an integral part of the research discovery, Syracuse University hosted a live broadcast of the NSF press conference and further explained the discovery in a panel discussion in Goldstein Auditorium at the Schine Student Center.

“People ask me a lot what it means to be a great research university,” Chancellor Kent Syverud said at the event. “[Today] I have a new answer: it is when faculty, students and staff collaborate to help give the whole world a new way to understand the universe.”

That was once thought impossible to detect or prove; scientists took the risks, made the giant leaps and found it possible.

“The discovery of these binary black holes crashing into each other is really just the beginning of a whole new field of gravitational wave discovery,” says Duncan Brown, the Charles Brightman Endowed Professor of Physics. “It’s going to open up many opportunities for new research from Astronuclear physics, to strong field gravity … all these exciting areas that capture the imagination of students. We are just at the beginning here.”

The historic finding marks a new chapter for the University as it reaches for new levels of research distinction, a key priority of the University in its Academic Strategic Plan.

An important boost to the University was also the recent upgrade in research classification from “R2” to “R1,” according to the recently released 2015 Carnegie Classification of Institutions of Higher Education. The classification, examined every five years, distinguishes research institutions based on such factors as research and development expenditures, research staff and number of doctoral conferrals.

Thursday’s physics announcement builds on the significance of the Carnegie classification and the University’s commitment to sustaining and growing important collaborative research with broad impact. 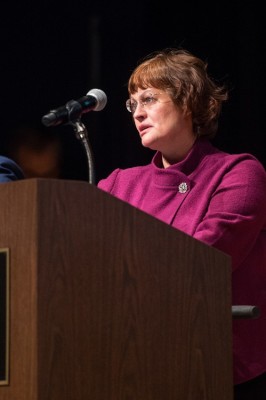 “The significance of this discovery speaks to the power of science to solve long-standing, fundamental research questions,” said Karin Ruhlandt, dean of the College of Arts and Sciences and Distinguished Professor of Chemistry. “That Syracuse University was a part of this project speaks to our growing prominence as a world-class research university.”

Instrumental in raising the bar is the team of physicists from the College of Arts and Sciences who made significant contributions to the recent discovery: Brown; Peter Saulson, the Martin A. Pomerantz ’37 Professor of Physics; Stefan Ballmer, assistant professor of physics; and a group of nearly two dozen students and research scientists.

The current generation of Syracuse physicists continues the tradition of leadership in gravity research dating back to Peter Bergmann, one of Einstein’s research assistants and a professor in Syracuse’s physics department from 1947 to 1982. Other University notables include Emeritus Professor Joshua Goldberg, former research scientist Roy Kerr and LIGO spokesperson Gabriela Gonzàlez G’95, who is professor of physics and astronomy at LSU, as well as one of Saulson’s former Ph.D. students.

All of the work by hundreds of physicists and researchers over decades of study came together at 5:51 a.m. Sept. 14, 2015, when the gravitational waves were detected by both of the twin Laser Interferometer Gravitational-wave Observatory (LIGO) detectors, located in Livingston, La., and Hanford, Wash., USA. The LIGO Observatories are funded by the NSF, and were conceived, built, and are operated by Caltech and MIT. 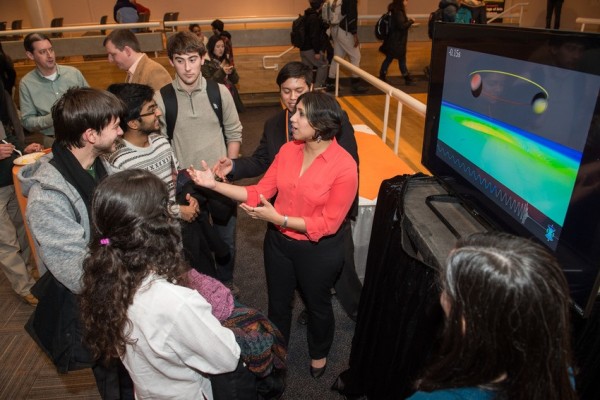 Researchers discuss the discovery of gravitational waves with students and visitors following Thursday’s press conference in Goldstein Auditorium in Schine Student Center. There were several displays set up after the event to represent the findings.

The LSC had been in pursuit of what Einstein had proposed: that gravitation was not a force but the result of matter disrupting space and time. The technical resources to fully prove that theory were not capable of detecting such subtle waves, until now.

But this discovery is not an end, but a springboard to even greater understanding and findings.

“It means we’re at the beginning of a new era of astronomy,” Saulson said. “We’re going to see the universe in a whole new way.”

Along with honoring the work of the scientists and their perseverance, Ruhlandt recognized the palpable effect this type of far-reaching research has on students.

“It requires them to be curious and tenacious. It allows them to work side-by-side with terrific scholars, teachers and mentors. And it cultivates in them a hunger for discovery and knowledge that will serve them all their lives,” Ruhlandt said. “Many of our own students helped to support this research. That kind of experiential learning is a defining quality of an outstanding university education.”