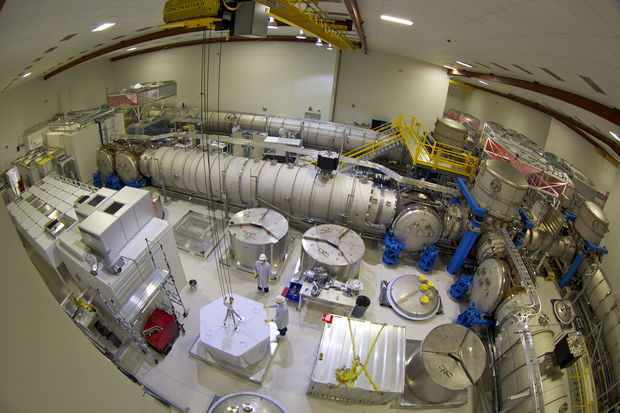 Syracuse University integral to detection of gravitational waves by LIGO

For the first time, scientists have observed ripples in the fabric of spacetime called gravitational waves, arriving at the earth from a cataclysmic event in the distant universe. This confirms a major prediction of Albert Einstein’s 1915 general theory of relativity, and opens an unprecedented new window onto the cosmos.

Gravitational waves carry information about their dramatic origins and about the nature of gravity that cannot otherwise be obtained. Physicists have concluded that the detected gravitational waves were produced during the final fraction of a second of the merger of two black holes to produce a single, more massive spinning black hole. This collision of two black holes had been predicted but never observed.

The gravitational waves were detected on September 14, 2015, at 5:51 a.m. Eastern Daylight Time (9:51 a.m. UTC) by both of the twin Laser Interferometer Gravitational-wave Observatory (LIGO) detectors, located in Livingston, Louisiana, and Hanford, Washington, USA. The LIGO Observatories are funded by the National Science Foundation (NSF), and were conceived, built, and are operated by Caltech and MIT. The discovery, accepted for publication in the journal Physical Review Letters, was made by the LIGO Scientific Collaboration (which includes the GEO Collaboration and the Australian Consortium for Interferometric Gravitational Astronomy) and the Virgo Collaboration using data from the two LIGO detectors.

A team of physicists from Syracuse University’s College of Arts and Sciences has been instrumental in the discovery. They include Peter Saulson, the Martin A. Pomerantz ’37 Professor of Physics; Duncan Brown, the Charles Brightman Endowed Professor of Physics; Stefan Ballmer, assistant professor of physics; and a group of nearly two dozen students and research scientists.

“Einstein theorized that gravity was not a force, but a curvature of spacetime,” Saulson says. “Think of the two black holes, which we’ve observed, as two bowling balls, rolling along a trampoline. They orbit each other because their mass produces a deep depression in the surface of the trampoline. As the balls orbit, they jiggle the trampoline’s surface, sending out energy in the form of ripples called gravitational waves.”

But that’s where the analogy ends. “In spacetime, the two black holes eventually collide with one another to form a single black hole,” Saulson continues. “The ripples from this cataclysmic event propagate through spacetime at the speed of light. They’ve traveled through the universe for more than a billion years, before reaching us on September 14.”

Brown is a leader in the search for black holes with LIGO. He says LIGO witnessed the two black holes colliding with one another at nearly half the speed of light. “As they collided, some of their mass was converted into energy, according to Einstein’s formula E=mc2,” says Brown, referencing the famous theory of relativity. “The peak power output was about 50 times that of the light emitted by all the stars in the universe. It is these gravitational waves that LIGO has observed.”

Like Brown, Ballmer is highly regarded within the LIGO community. Part of Advanced LIGO’s design team, he spent considerable time in Hanford, building the detector. “I was amazed at how soon into its first observation run that Advanced LIGO made this discovery,” he says. “I was in the LIGO control room the night before for the final detector tuning. When I returned the next morning, there was a buzz in the air. I’ll never forget staring at the first plots, getting goose bumps.”

The discovery was made possible by the enhanced capabilities of Advanced LIGO, a major upgrade that increases the sensitivity of the instruments compared to the first generation LIGO detectors, enabling a large increase in the volume of the universe probed—and the discovery of gravitational waves during its first observation run. The US National Science Foundation leads in financial support for Advanced LIGO. Funding organizations in Germany (Max Planck Society), the U.K. (Science and Technology Facilities Council, STFC), and Australia (Australian Research Council) also have made significant commitments to the project. Several of the key technologies that made Advanced LIGO so much more sensitive have been developed and tested by the German-UK-GEO collaboration. Significant computer resources have been contributed by the AEI Hannover Atlas Cluster, the LIGO Laboratory, Syracuse University and the University of Wisconsin-Milwaukee. Several universities designed, built and tested key components for Advanced LIGO: The Australian National University, the University of Adelaide, the University of Florida, Stanford University, Columbia University of New York and Louisiana State University.

Although the Earth is theoretically awash in gravitational waves, detecting them is another matter. “Gravitational waves stretch space, but their effect is almost imperceptible,” Saulson says. “It has taken 21st-century technology, a team of hundreds of experts and decades of effort to detect them.” 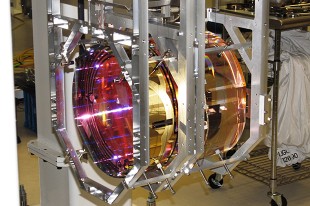 Part of a LIGO detector, which detects ripples in space-time by using a laser interferometer (Credit: Caltech/MIT/LIGO Laboratory)

Each of the two LIGO detectors is a giant laser interferometer. A laser beam is split into two, and then is sent down a pair of 2.5 mile-long tunnels that are perpendicular to one another. Mirrors at the end of the tunnels reflect the light back to where the laser beam was split.

Since both tunnels are the same length, the light takes exactly the same time to travel to the end of each tunnel and back. But if a gravitational wave passes through Earth, it changes the length of the tunnels, causing the light beams to return at different times. By comparing both beams, LIGO is able to measure the stretching of spacetime caused by gravitational waves.

Brown says that LIGO detectors are so sensitive that even the slightest trace of background noise—the hum of an air compressor, the rumbling of traffic, the crashing of an ocean wave, hundreds of miles away—can drown out gravitational-wave signals.

Therefore, LIGO scientists need massive amounts of computing power to find signals in the noise. Brown and his LIGO collaborators use a high throughput computing environment called Orange Grid, along with the Crush supercomputer, housed in the Green Data Center on the University’s South Campus, to detect black holes.

“What we have built is akin to Galileo’s first telescope,” Ballmer says. “We have just taken our first look at the universe in a completely new way. There is so much to learn from gravitational waves in the coming years, and likely many surprises.”

A. Alan Middleton, professor and chair of the Department of Physics at Syracuse, considers the discovery a “historic advance in physics.” “Our Gravitational Wave Group has made central contributions to the opening of a new window onto the universe—a window that has already revealed some of the most exotic objects and awe-inspiring events in all of existence,” he says. “Without question, this group’s amazing accomplishments help make the University internationally prominent in research.”

The current generation of Syracuse physicists continues the tradition of leadership in gravity research dating back to Peter Bergmann, one of Einstein’s research assistants and a professor in Syracuse’s physics department from 1947 to 1982. Other University notables include Emeritus Professor Joshua Goldberg, former research scientist Roy Kerr and LIGO spokesperson Gabriela Gonzàlez G’95. In addition to carrying out one of the first calculations of the emission of gravitational waves by binary stars, Goldberg organized a 1957 landmark conference, in which the physical effects of gravitational waves were predicted and the first experiments to detect these waves were conceived. Kerr, who was on the research staff from 1958 to 1960, discovered the solution to the Einstein field equation of general relativity, which describes the black holes that LIGO saw. González is professor of physics and astronomy at LSU, as well as one of Saulson’s former Ph.D. students.

“Today is a great day for Syracuse University and for scientific research across the globe,” says Chancellor Kent Syverud. “Thanks to the persistence and insight of our faculty, as well as participating students, we now have a more complete picture of the universe. Their work shines new light on how the universe formed, our place in it and where it’s headed in the future. This accomplishment exemplifies the University’s commitment to being a great place for research, and further positions the University as a global leader in discovery and exploration.”

Karin Ruhlandt, dean of the College of Arts and Sciences and Distinguished Professor of Chemistry, agrees: “This discovery is a reflection of the tenacious, entrepreneurial spirit of our Syracuse scientists. It is a milestone in a new era of research for the Department of Physics, the College of Arts and Sciences and Syracuse University, cultivating a state of wonder about the limits of thought and our view of the universe.” 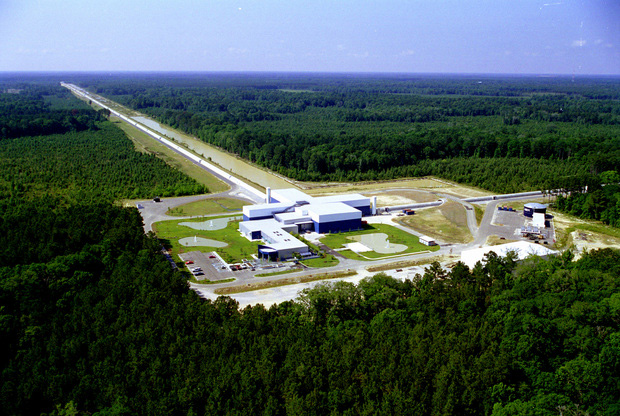 LIGO research is carried out by the LIGO Scientific Collaboration (LSC), a group of more than a thousand scientists from universities around the United States and in 14 other countries. More than 90 universities and research institutes in the LSC develop detector technology and analyze data; approximately 250 students are strong contributing members of the collaboration. The LSC detector network includes the LIGO interferometers and the GEO600 detector. The GEO team includes scientists at the Max Planck Institute for Gravitational Physics (Albert Einstein Institute, AEI), Leibniz Universität Hannover, along with partners at the University of Glasgow, Cardiff University, the University of Birmingham, other universities in the United Kingdom and the University of the Balearic Islands in Spain.

Virgo research is carried out by the Virgo Collaboration, consisting of more than 250 physicists and engineers belonging to 19 different European research groups: six from the Centre National de la Recherche Scientifique (CNRS) in France; eight from the Istituto Nazionale di Fisica Nucleare (INFN) in Italy; two in The Netherlands with Nikhef; the Wigner RCP in Hungary; the POLGRAW group in Poland; and the European Gravitational Observatory (EGO), the laboratory hosting the Virgo detector near Pisa in Italy.