Caitlin McDonough, a Ph.D. student in biology, has been awarded a National Science Foundation (NSF) Graduate Research Fellowship, supporting her study of the intricate details of reproduction. The award provides three years of independent financial support for early-career graduate students. 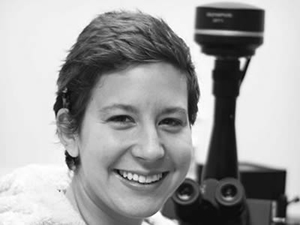 Steve Dorus, associate professor of biology and McDonough’s co-advisor, says the award is well deserved. “It allows Caitlin to reach her ambitious research goals,” he adds.

Scott Pitnick, the Weeden Professor of Biology and McDonough’s other advisor, agrees: “She is phenomenally smart and driven, and is among the best graduate students I have had the privilege of working with.”

As for her research, it turns out that mating is not the end of reproduction: a lot happens within the female reproductive tract after mating, too.

McDonough studies proteins secreted by females that interact with sperm, as well as other proteins that males transfer during mating. She is particularly interested in a tiny pair of organs known as parovaria, found in female insects. “It’s about the size of the point of a needle, but its size changes a lot, depending on whether or not it’s filled with proteins,” she says. “When the parovaria is full, you can see the faint outline of all of these different cells, which is really pretty.”

Parovaria are largely a mystery to scientists—one McDonough hopes to crack. She says that previous research suggests that female-produced proteins play an important role in reproductive events, such as moving sperm into specialized storage organs, fertilizing eggs and laying them. However, it’s difficult to nail down the jobs of different secretions from different organs. “The problem is that there’s just so much going on in the female reproductive tract. It’s really hard to parse out what exactly is happening and what the female is contributing,” McDonough says.

To identify what female proteins are important for reproductive processes, she compares levels of RNA in mated and unmated females of the fruit fly, which is the standard work-horse for genetic studies. RNA is the intermediate player in translating the genetic code into active proteins. If the level of RNA changes drastically after mating, it’s a good indicator that the protein the RNA encodes is a player in reproductive processes.

McDonough explains that many different animals produce the same proteins—from tiny flies to humans. “Research like this has implications on proteins that might be secreted by the human female reproductive tract, as well,” she says. By identifying the role of specific proteins in fruit flies, McDonough implies we may better understand how reproduction works in our own bodies.

McDonough thinks considering our definitions of male and female roles (e.g., the presumption of active males and passive females) can improve research. For instance, it can get scientists thinking of new questions about animals that fall outside standard human gender roles. “I think it could really use a shakeup. It’s definitely happening in the scientific community, and I think it will happen faster if scientists and groups outside the scientific community talk to each other,” she says.

Meanwhile, McDonough has many flies to dissect and many proteins to measure, all with enthusiastic support from her advisors. Adds Dorus: “We’re excited to see where her research leads us. I’m confident that this isn’t the last newsworthy accomplishment in store for Caitlin during her time at Syracuse.

Alexander Metcalf, a senior aerospace engineering major in the College of Engineering and Computer Science and a member of the Renée Crown University Honors Program, has been named 2021-22 Astronaut Scholar by the Astronaut Scholarship Foundation (ASF). Founded by the…

Steve Sawyer, professor at the School of Information Studies (iSchool) and core faculty member in the Renée Crown Honors Program, has been recognized with the 2021 Award of Merit by the Association for Information Science & Technology (ASIS&T), the highest…

A team led by Nina Sharifi, assistant professor of architectural technology in the School of Architecture, is undertaking a $1.59 million retrofit demonstration project and “living lab” for ongoing research using a South Campus dormitory at Winding Ridge. The pilot…