Student Goes from Learning Code to Teaching It 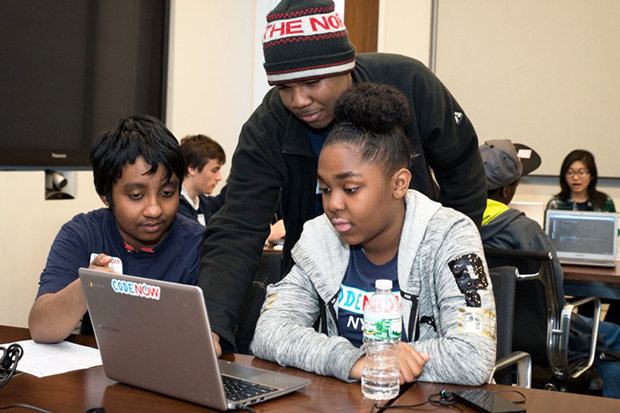 Marcus Robinson works with students as part of the CodeNow program to assist youngsters in learning computer coding. (Courtesy of CodeNow)

Marcus Robinson ’19 had always been interested in math, engineering and computer hardware, but coding was different.

It seemed confusing and a little daunting—until he signed up for a workshop during his junior year in high school.

“My mom came home with an application for me and once I learned about it, I applied and got in,” says Robinson, who is from Brooklyn. “I didn’t really know how to code. It was a new experience for me, but when I finished that first day, I instantly fell in love with it.”

Robinson underwent the workshop through CodeNow, a nonprofit organization that hosts weekend workshops for underrepresented youth with the help of professional engineers.

“They pretty much taught me how to code. I started coding and I got deeper and deeper into it. Then I started to do my own research,” says Robinson, a computer engineering major in the College of Engineering and Computer Science.

With his knowledge and enjoyment for the technical work, Robinson was brought on by CodeNow as an alumni trainer, helping the young people who were sitting where he once was trying to grasp the concepts.

“Once they saw me work with those kids, they asked me to do a learning video,” Robinson says. 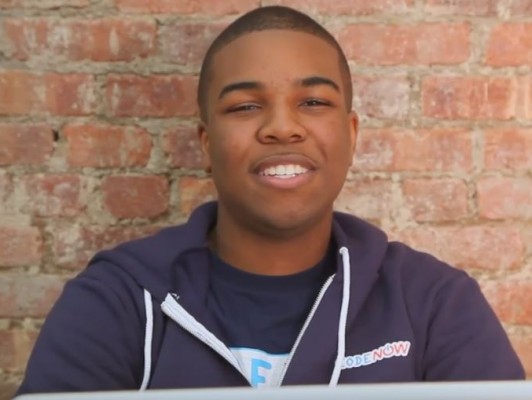 Robinson completed six videos on certain topics to help the mission of CodeNow: bringing coding to more young people outside of the workshops.

For Robinson, coding is like a puzzle to solve. “Coding is pretty much problem solving. It’s about finding the errors and seeing how to fix them,” he says.

While teaching, he found satisfaction in being able to show others how they can excel in learning this skill.

“I enjoy that they are able to understand the information and interpret what I’ve told them, but also actually be creative on their own,” Robinson says. “It also makes me a better programmer because I’m able to use and develop my ideas and share them with others.”

As a result of his work with CodeNow, Robinson created a computer science club at his high school for people who needed help or for those who wanted to create projects.

“It encouraged me to try and learn programming language on my own using Code Academy [an instructional website] and it kind of wanted me to get into the software world, which answers why I came to Syracuse,” Robinson says. “The field of the computer engineering deals with hardware, but it also deals with software, and that’s what I want to keep digging deeper into.”

The work led him to Syracuse. “It’s been pretty great; this community is definitely the place I belong,” he says.

In the future, Robinson hopes to work possibly for a tech giant, like Microsoft or Quicken, or as a technical analyst at a big firm.

He might also like to teach at one point. He remembers what it meant to him when students were able to solve problems with his help.

“That was the best part, when you see smiles on their faces knowing that they understood and that they solved a problem,” Robinson says.