R. David Lankes, professor and Dean’s Scholar for the New Librarianship at the School of Information Studies (iSchool) has been selected to receive the 2016 American Library Association (ALA) Ken Haycock Award for Promoting Librarianship.  This honor is given annually to an individual who makes a significant contribution to the public recognition and appreciation of librarianship. 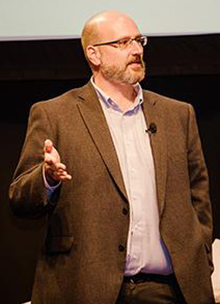 “I am honored to receive this award from the ALA,” says Lankes. “It recognizes my long passion for the field of librarianship and its importance in today’s communities. I am in some humbling company, and it is a special honor for me personally to be associated with the work of Ken Haycock, one of the profession’s all-time great champions.”

Lankes is a passionate advocate for libraries and their essential role in today’s society. He seeks to understand how information approaches and technologies can be used to transform industries. In this capacity he has served on advisory boards and study teams in the fields of libraries, telecommunications, education and transportation, including at the National Academies. He has been a visiting fellow at the National Library of Canada and the Harvard School of Education, and was the first fellow of ALA’s Office for Information Technology Policy. His book, The Atlas of New Librarianship won the 2012 ABC-CLIO/Greenwood Award for the Best Book in Library Literature.

He was recently named the 2016-2017 Follett Chair at Dominican University’s Graduate School of Library and Information Science.

The Ken Haycock Award for Promoting Librarianship will be presented to Lankes at the ALA award ceremony and reception during the Association’s annual conference in Orlando, Florida in June.